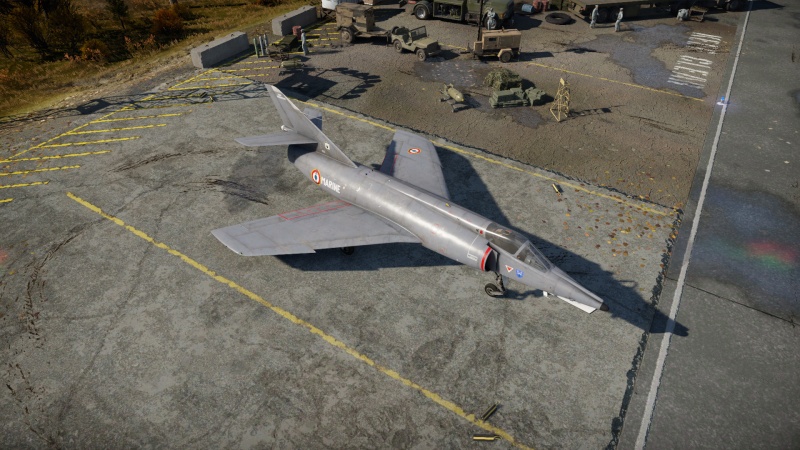 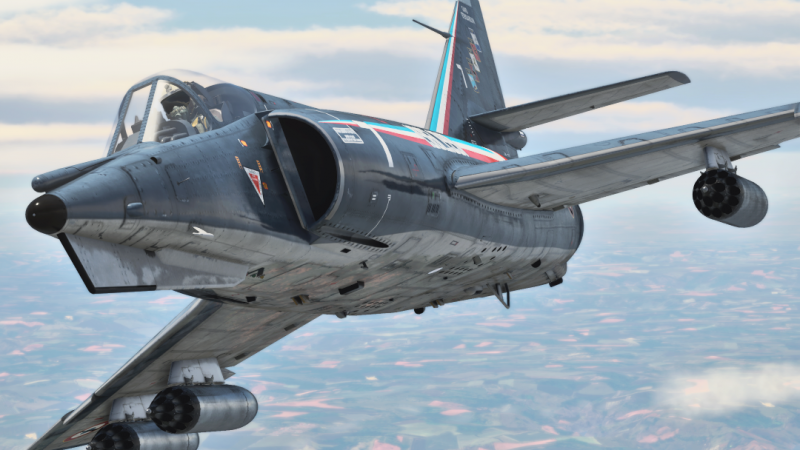 The Etendard IVM is a rank VI French strike aircraft with a battle rating of 9.3 (AB/SB) and 9.0 (RB). It was introduced in Update 1.95 "Northern Wind". It was first conceived as a fighter for NATO's NMBR-1 fighter competition, where it lost against the Italian G.91 pre-serie. The French Navy, requiring a carrier-borne attacker, adopted the design, which was christened as the Etendard IVM. This is reflected in the Etendard's capability to dogfight other jet fighters while designated as a Strike Aircraft.

The many lessons learnt to use the Etendard will be crucial for future French jets, which includes the Mirage F1C.

The Etendard has good acceleration up to 1050 km/h, after which the aircraft tends to have a very difficult time accelerating. Manoeuvrability is acceptable when above 800 km/h - not great, but not bad. However, dipping below 800 km/h causes the aircraft to lose much of its turning ability, which requires the pilot to pop out flaps to remain manoeuvrable. Energy retention is quite poor at all speeds, but once the aircraft is able to get back into a straight line, said energy will be regained quite quickly. The aircraft has a good rate of climb compared to its counterparts.

Although it does not have an afterburner, the Etendard has a very competitive TWR and acceleration, thanks to its light weight and powerful engine. It also has a good climb rate, decent turn rate, and a fairly standard set of armaments. However, like many French jets at its rank, it tends to have poor energy retention, and any manoeuvring tends to drastically reduce acceleration. This means that a turnfighting playstyle is often difficult, and defensive flying is hard to do successfully- the player should avoid gaining a tail if at all possible.

As such, the aircraft's good climbing ability and acceleration make it better suited for a more passive boom and zoom playstyle, where it is unlikely that an enemy will be able to chase it down. Such a playstyle will require teamwork. The Etendard is by no means a solo carry, and diving in and out of furballs to support teammates is often necessary. In this playstyle, the player will be easily able to keep a speed above 800 km/h (below which the aircraft's manoeuvrability suffers greatly).

In case if the Etendard were to fall under 800 km/h, the only way to survive is either through regaining energy and run away, or pop out flaps. The Etendard is a jet that requires a pilot to use their flaps properly. This way, the Etendard can outturn its majority of opponents. Just be careful to not lose all of its energy. The key to using flaps for the Etendard is as follows:

The above flaps guide for the Etendard is a necessary component of the Etendard, as this is the only way to maintain ideal and competitive manoeuvrability over other jets. However, it is important that a pilot retain most of their aircraft energy, and thus, don't overextend the Etendard's manoeuvring capability.

The Etendard has two 30 mm cannons mounted on the bottom side of the aircraft. This can throw off many players' aim, and the only way to resolve this issue is through practice. Another good way to compensate this is by setting the gun convergence around 400-600 m with vertical targeting on. While this might help, practice remains necessary.

The aircraft's air-to-air missiles, while less able to lock and track enemies than missiles mounted by other aircraft above its rank, can be very effective against slow targets and non-manoeuvrable bombers such as the B-57, Tu-14T or the Israeli Vautour IIA and Vautour IIN.

Apart from that, the Etendard has access to CCIP for its rockets and bombs, a rarity for aircraft at this BR. Other aircraft that has access to CCIP or CCRP around this BR includes the A32A, both Buccaneer S.1 and S.2, and the Su-7B. Combining the flight performance of the Etendard and access to ballistic computers, this aircraft makes one of the most accurate and effective attacker of its BR, especially in Ground RB. This compensates for its limited suspended armaments compared to its more dedicated attacker peers.

The Etendard also has access to a DRAA 3D radar. A radar at this BR is a really rare feature, present only in a few select aircraft, such as the F-86K, Lim-5P and the unwieldy Vautour IIN (Israel). However, the Etendard's radar is the weakest of them all, having only a 25° x 25° detection cone, which is a far cry from the Lim-5's 120° x 30° detection cone. While the radar is weaker compared to its peers, the presence of the radar alone could be useful in some situations, especially if you are playing simulator.

The Dassault Etendard was developed from an aircraft initially intended for the French Air Force to participate in the competition for the best ground attack aircraft capable of operating from makeshift runways.

A new engine was then added to it: the Atar 8 (Atar 9 without afterburner); an in-flight refuelling probe; new high lift devices; a new fuselage with a larger wing area; foldable wing tips; a new reinforced structure to support catapult launches and landings; and finally, an enlarged nose cone to fit the new Aida radar for aerial and ground target acquisition. In addition, a SAAB AX 26 toss-bombing and ballistic computer was incorporated into the design. 5 pre-production airframes were ordered by the French Navy in May 1957. On May 21, 1958, at Melun Villaroche, Jean-Marie Saget took charge of the plane. The Etendard flew as fast as the Super Mystere B2 despite not having an afterburner.

Dassault would produce 90 copies in Mérignac (not counting the prototypes). From the Etendard IVM no.1 to no.69, deliveries were made from December 1961 to May 1965.

The Etendard IVM was gradually withdrawn from service from 1978, due to the introduction of the Super Etendard.