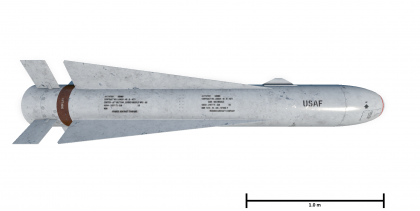 The AGM-65A missile (scale is approximate)

The AGM-65A is an American TV-guided air-to-ground missile. It was introduced in Update "Ixwa Strike".

The AGM-65A started development in 1965 due to the bad performance of the AGM Bullpup, which Hughes was selected in 1968 as the prime contractor. In September of 1969, the first prototype took flight, and in December of that year made the first guided direct hit. Production of the A model started in August of 1972 for the USAF.

The AGM-65A's damage is somewhat inconsistent, mainly dependent on what targets you are striking. Light tanks/SPAAs/Open tops will generally be destroyed in one shot thanks to its 51kg warhead. However, against heavier targets like MBTs and heavies, the missile's damage is more inconsistent. Thanks to the automatic TV guidance of the missile, it can commonly land hits on only tracks or on the thickest armor parts at bad angles. It doesn't have enough damage to overpressure these heavier vehicles, so firing from above and/or behind your target will result in the best results. It may have 830mm of pen, but composite armor/ERA is too common at the rank to allow it to consistently engage targets at any angle without eating it.

Similar missiles around the 9.3/10.3 battle-rating range are either Manual, SACLOS, or Laser-guided. The AGM-65A is the worst of the TV guided missiles, below the later 65B and the Russian Kh-29T. The 65B is more consistent, with a longer effective lock-on range and better controls allowing you to engage from both longer and closer distances. The Kh-29T on the other hand is far greater in power, as it carries a whopping 148 kg explosive mass, allowing it to even destroy multiple vehicles with one missile. Versus other missiles of the rank, this early Maverick has the advantage of being incredibly accurate, allowing you to scan the terrain for targets, and being fire-and-forget. The AGM-12 Bullpup, AS-20/30 Nord, and Kh-23M are keyboard-guided which either require great practice or firing like rockets. The Kh-66 is a beam riding missile, requiring you to lead the missile all the way in using your nose which leaves you incredibly vulnerable to ground fire/the ground. The AS-30L is the best competitor at 10.3, with great range, damage, and being laser guided (of which the Jaguar A's ATLIS pod is amazing for).

Overall, the missile is very straight forwards: Point at target in third-person or inside the missile camera, press your target lock keybind, wait for the missile to follow the target, and fire. However, versus different targets, you'll have to use it differently. Also, the range is quite poor for moving targets, so keep your range to target in mind.

Air RB: In Air RB, this missile can be used in 3 main ways; Pillboxes/tanks, head-ons, and airfield campers. On ground targets, it's best used on pillboxes/tanks as they yield the most SL/RP. Simply just point and shoot and they'll die in one shot. Now against aircraft, the Mavericks can somewhat work. Using them on a head-on can make an enemy break off early, or even destroy them if they're flying straight (especially A-10s). However, against airfield campers the Mavericks allow you to snipe people on the field outside of SAM range. Fly above the enemy airfield, and get a lock on their plane. The slow and predictable path can allow you to get easy hits.

Ground RB: Ground RB is where the Maverick truly shines. An amazing tank-buster, it cracks even the heaviest tanks with just 1 or 2 missiles. Your first targets should generally be enemy AA's that threaten your very existence in the air. Spawn, climb, and get into their dead-zone while dropping missiles from 3km+ away. You CAN hit enemies from further than 3-4km, but it won't track them moving. Instead you'll have to bank on the target sitting in one spot (which is common for AAs). After eliminating enemy AA, focus on opportune targets. Targets in the open, targets with little foliage/building cover, sitting still, etc. Cap points are an easy way to find enemies, as just find a point being capped by an enemy. If you need to quickly lock up a target, don't forget you can activate your lock and lock targets in third person. The tracker will search right at your crosshair, and leave a square on the spot/target its chosen.

Also attached to Ground RB is engaging enemy helicopters. The Mavericks have quite the ability to eliminate enemy helicopters, thanks to being fire-and-forget and helicopters rarely have the agility to dodge. They seem to gain an extra kilometer or 2 of lock range on helicopters, so don't rule out helicopters (unless you just want to gun them down and run the risk of getting gunned yourself).