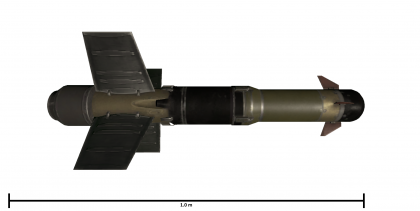 The 9M113 Konkurs is a Soviet SACLOS-guided anti-tank guided missile. It was introduced in Update 1.71 "New E.R.A.".

The 9M113 "Konkurs" is one of the best early soviet anti-tank guided missiles coming with 250mm of armor penetration at a 60 degree angle, making it very easy to destroy most machines on the battlefield. It has a firing range of 3000 meters or 3 kilometers, which is enough to fire at most targets in the battle. With a speed of only 248m/s it can be very hard to hit a far away target moving towards cover, but when it does hit, it delivers a blow with 2.75kg of "A-IX-1" which is equivalent to 4.23kg of TNT. The missile can hit at an 80 degree angle with a 0% chance of a ricochet. 82 degrees is the middle at 50%, and 90 degrees is a 100% chance of a ricochet.

The missile has very similar damage properties to the HEAT/HEATFS shell, the fuze detonates on impact causing pressure inside the missile that forces superplastic metal into the vehicle, penetrating it if the vehicle doesn't have more armor than the armor penetration of the missile or protective systems such as ERA (Explosive reactive armor) or APS (Active protection system).

This missile is very often compared to the 9M117 Bastion found on the BMP-3. The Bastion is better than the Konkurs in most situations, but it is also only usable by tanks at a higher battle rating than the vehicles that have the Konkurs.

Another ATGM comparable to the Konkurs is the 3M7 Drakon. The two have many similarities, some key differences are:

Both the Drakon and the Konkurs are great missiles, and both of them can perform better than one another in different scenarios. so its up to the player to choose which one fits their playstyle better.