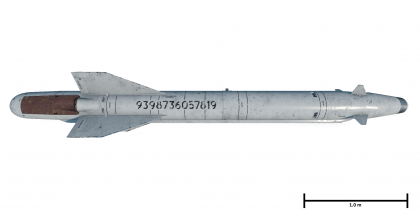 The Kh-25ML missile (scale is approximate)

The Kh-25ML is a Soviet laser-guided air-to-ground missile. It was introduced in Update "Direct Hit".

There is no effective, practical usage for the Kh25ML in combat, due to the extreme limitation in target acquisition capability of the MiG-27M. This makes it very difficult to utilize the Kh25ML's long range and high average flight speed. Thus, the Kh25ML is best in PvE game modes where the enemy marker is visible and can be used to compensate the poor zoom in the MiG-27M's targeting view.

To use the Kh25ML: 1. Fly your aircraft with the nose directly towards the target as if you are using MCLOS-guided AGM, like the AGM-12 Bullpup. 2. Warm up the missile by pressing the Weapon lock (air-to-ground) button. 3. Switch to the targeting view. You must acquire a target before you switch since the lack of effective zoom in the MiG-27M's targeting view makes it unsuitable for visual target acquisition. 4. Press the Toggle Laser Designator button to active the laser target designator. 5. Wait for the missile prompt to change from grey ACQ to red TRK. 6. Fire the missile and keep the crosshair overlapped on the enemy marker. 7. Switch out of the targeting view and wait for impact. Due to the low zoom, any mouse movement will translate into a very large shift in the laser designated position, which will easily cause the missile to lose track of the target or jerk out of control; thus exiting the targeting view can eliminate this possibility.