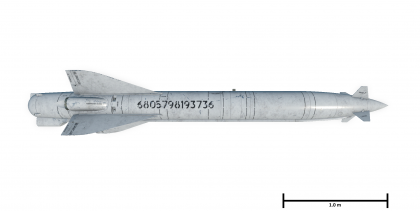 The Kh-23M missile (scale is approximate)

The Kh-23M is a Soviet manually-guided air-to-ground missile. It was introduced in Update "New Power".

The Kh-23M is a modernized variant of the Kh-23 air-to-surface missile, designed to be used against small ground and naval targets. Controlled by command radio guidance, a tracer element is used to determine the position of the missile as it is guided to the target. The missile weighs 289 kg, but the warhead consists of a 75 kg shaped charge/fragmentation warhead (with TNT equivalence of 96 kg), capable of penetrating 78 mm RHA.

The Kh-23M is a versatile missile. It is comparable to the AGM-12 Bullpup and AGM-62 Walleye. While it does not pack a punch bigger than the AGM-12C Bullpup, it is the counterpart of the AGM-12B with a similar explosive mass and penetration.

The Kh-23M is most effective at destroying stationary targets or slow moving ones. The explosive mass is something that lacks and should be compensated by precise hits. It has a maximum range of 10 kilometres (5.4 nmi). It can be manually controlled like the AGM-12 Bullpups and AS-30 Nords. There are no significant differences in flight performance aside from the missile speed.

While the Kh-23M has very low penetration capabilities (78 mm at any range and angle), any direct hit will ensure target destruction. The warhead is fairly small and mediocre compared to other missiles, even rockets. However, it is enough to take a heavily armoured target if a direct hit is achieved.

The story of the Kh-23M starts with the K-66 missile. The K-66 used a K-8 missile airframe with the beam riding guidance systems of the K-5 AAM. The K-66 was a stop gap measure as it required the pilot to maintain a dive to guide the missile. It entered service in 1968. Meanwhile, development on the Kh-23 continued. Improvements to the motor were made, but the largest difference was the switch from the beam guidance system to radio guidance, similar to that of the American Bullpup system. The new guidance system allowed the missile to be fired from level flight. The Kh-23 entered service in 1973, a further advanced missile, the laser-guided Kh-25, was developed from the Kh-23 with improvements being back-ported to create the Kh-23M which entered service in 1974. A continuous problem with the Kh-23M was the pilot's need to pay continual attention to guide the missile, meaning the pilot had to avoid using the missile in a hostile airspace and rather focus on defensive manoeuvres.