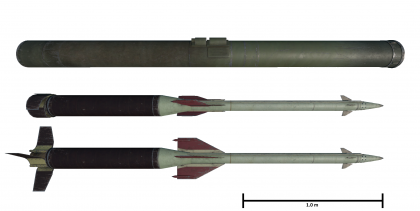 The 9M311 missile (the launch tube, missile with fins folded, and deployed missile are shown; scale is approximate)

The AAM 9M311 is a 76 mm SACLOS-guided surface-to-air missile containing 4.62 kg of explosive equivalent of TNT. After detonation the missile behaves as an HE projectile sending debris over the target. For doing so it has a proximity fuse of 5 m with an arming distance of 300 m. With a flight speed of 910 m/s it is capable of destroying any air target.

In terms of tactical usage the AAM 9M311 is limited to anti-aircraft warfare similarly to the Roland 1 and the FlaRakPz 1 due to its HE capability.

The AAM 9M311 will have little trouble destroying enemy aircraft or helicopters due to its speed and firing range (8 km).

Although it can be fired on tanks, the missile will not be very affective against them but in most cases the explosion will destroy the gun barrel or the tracks. The only way to destroy an MBT is to land the missile on the top of the tank so the explosion can pierce the thinner roof armour. The missile is very effective against lightly armoured targets such as other AAA vehicles or IFV's.