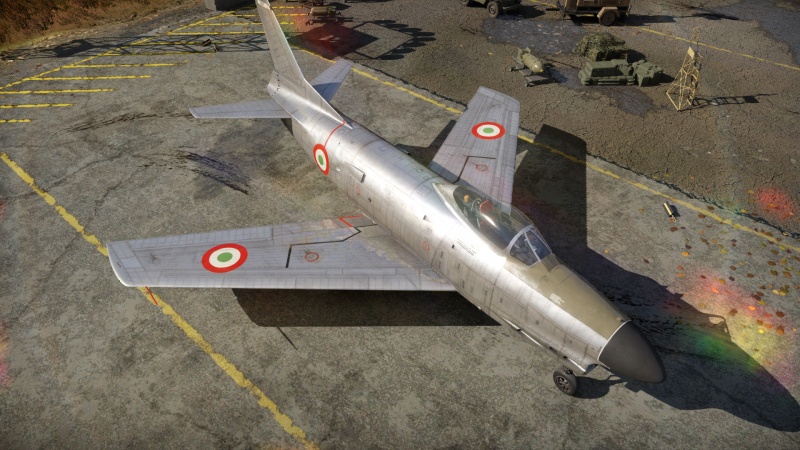 The F-86K is a good aircraft at its rank, but not the best. The F-86K has very good low-end acceleration due to its afterburner, however, this aircraft is still only a subsonic fighter. Like every other jet, it's bad at manoeuvring at low speeds and its control surfaces compress at high speeds. However, the F-86K can handle top speed relatively well compared to other aircraft of its rank. If the F-86K can do one thing very well, it excels when going into vertical flight.

The F-86K (Italy) can be outfitted with the following ordnance:

The F-86K should be used mainly as a support fighter, due to its sub-par manoeuvrability at low speeds compared to other aircraft at its rank such as the MiG-17. In a 1 vs 1 dogfight, the F-86K is outclassed when pitted against a MiG-17 unless you fight in the vertical. When it comes to bomber hunting, this aircraft has four 20 mm M24A1 cannons which is more than enough, but you will sadly almost never see a bomber. These are also fantastic to use during a head-on attack, but don't commit to head-ons. Instead, fire a burst from maybe .8 km out then pull out. This is to decrease the chances of both of you crashing. Your opponents will mainly be other similarly tiered aircraft, such as the F-86F-2 and J32B.

The 2 x AIM-9Bs are perfect for the rare chance you see a bomber, or if someone is trying to run away from you. However, these should never be used against a plane that is actively turning due to the poor tracking rate.

The F-86K is the NATO variant of the F-86D with the exception it did not sport the internal FFAR Mighty Mouse rocket launcher, but 20 mm cannons and Sidewinder missiles instead. Many foreign countries wanted a high altitude interceptor. This need was created by the Soviet bomber threat many Western countries feared of. The U.S. felt the F-86D would be the perfect candidate for NATO countries, however, they didn't give the F-86D away. This was due to sensitive material the F-86D possessed, especially the state-of-the-art fire control system. Not only was the fire control system sensitive info, but it was also unreliable and the U.S. did not want to give unreliable equipment to other NATO countries. So the U.S. came up with the F-86K, an almost exact copy of the F-86D other than an improvised fire control and a slightly longer nose. After the F-86K was designed, production started with NAA (North American Arms) making around a hundred F-86Ks. These were shipped to NATO countries and Italy, but the U.S. also sent sets of parts to Italy around 1956. Fiat took these sets and assembled their own F-86Ks. Some of the Fiat assembled F-86Ks were shipped to France or other NATO countries. Italy continued to use F-86Ks up until they started to slowly get rid of them starting 1964 to make space for the F-104 Starfighter. The last Italian F-86K was decommissioned in 1973.