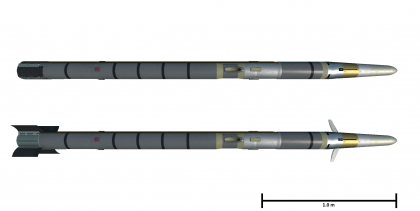 The 9K127 Vikhr is a Russian beam-riding air-to-ground missile. It was introduced in Update 1.93 "Shark Attack".

This can be used to great effect at long distance against tanks, helicopters, and any other slow-moving targets. This missile also has an unlisted secondary ability; the proximity fuse.

The proximity fuse can make fighting other helicopters and some aircraft quite easy.

It can also be used in conjunction with the 9M39 Igla missile, to bait an attacking jet into evading your Igla, losing all of their energy, and then attacking with your Vikhr when they are vulnerable. This tactic can also be used against helicopters, as they tend to have flares or IRCMs, the Vikhr missile is not affected by either.