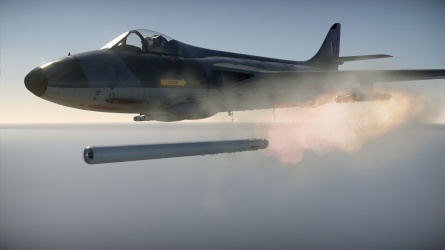 SRAAM fired from a Hunter F.6 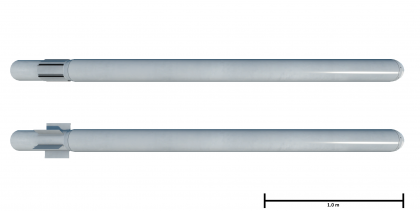 The SRAAM missile with fins folded and deployed (scale is approximate)

The SRAAM, or Short Range Air-to-Air Missile is a British Infrared homing air-to-air missile, it was introduced in Update 1.89 "Imperial Navy". As the name suggests the SRAAM has a short range compared to other missiles, however this is made up for by it being very manoeuvrable and hard to avoid.

The SRAAM is a highly manoeuvrable infrared homing air-to-air missile. The missile's use of thrust vectoring, and an IR seeker with very wide gimbal limits, means that it can track targets incredibly well compared to other air-to-air missiles. The missile has an uncaged seeker with a very wide gimbal limits, which makes maintaining locks on targets prior to launch much easier. The uncaged seeker also means that once the missile has been locked you can turn the plane and "lead" the missiles, as if you would an aircraft's guns, making them much more likely to hit.

The SRAAMs are carried in launch tubes, mounted in pairs under the wings.

The SRAAM has a relatively small warhead consisting of 4 kg of TNT with a 5 m proximity fuse. Most of the time this is adequate to outright destroy an enemy aircraft, however depending on the location of the missile when it explodes it is possible the target will only receive a varying amount of damage. While it is not uncommon for the enemy aircraft to eventually crash due to the damage they receive, some can make it back to the airfield or even continue fighting.

The main standout feature of the SRAAM, which sets it apart from all other infrared homing missiles (carried by fixed-wing aircraft at least) is its astonishingly good manoeuvrability. Though the SRAAM can only pull a maximum overload of 20 G, it is capable of out-manoeuvring more traditionally manoeuvrable missiles such as the AIM-9L and R-60, owing to its thrust vectoring system. The SRAAM powers up its IR seeker taking 1 second, and can keep its seeker active for 20 seconds.

The drawback of the SRAAM, however, is its short range, it is largely ineffective at ranges greater than 1 km; by comparison, other missiles such as the AIM-9E can hit targets from well over 2 km in a good situation. The SRAAM also has lower explosive mass than other missiles, at 4 kg of TNT. By comparison, the AIM-9B, D and E have 4.5 kg, the R-13M has 5.5 kg, and the R-3S has 11 kg.

The SRAAM is one of the most forgiving air-to-air missiles in the game because of their superb manoeuvrability; however, there are still things you need. to learn and practice in order to use them to their full potential. The first thing you need to learn when using the SRAAMs is their range; as a general rule, to start with you should not fire the missiles when you are more than 1 km from the target. SRAAMs have a very short range and generally firing them from further away will result in the missile exploding before it reaches the target. If you have a significant speed advantage over your target you can push the firing range up to around 1.2 km, but ultimately you have to learn to tell from experience when you can fire from in excess of 1 km.

Just because you shouldn't fire the missile from outside 1 km does not mean that you shouldn’t try to lock on to targets from outside 1 km. The SRAAM can lock on to targets up to 4 km away; you should be trying to obtain a lock once you are within about 2.5 km of your target; it is also possible to lock on to aircraft when approaching them from almost 90 degrees (directly to their side), under ideal conditions. Once the seeker is active, it will stay active for 20 seconds, giving you plenty of time to close the distance. Once you have a lock the seeker will be able to maintain the lock so long as the target is still somewhere within the outer ring on your screen. Once you have closed the distance to within 1 km if the target is turning (or you are approaching from an angle) then you will want to "lead" the missile, in the same manner, you would lead your guns if you were using them to attack. This will make the missiles much more like to hit, as they will not have to try to do a sharp turn immediately after leaving the tube.

If an enemy gets on your tail then activate the missile seeker and force an overshoot, as they pass you attempt to get a lock on and fire the missile as soon as possible; this will often result in a kill.

The old adage "prevention is better than cure" is certainly true when trying to dodge SRAAMs. Once an SRAAM is on its way to you it is going to be very hard to avoid (baring a mistake on the part of the person who fired it), therefore it is always best to take preventative action when facing aircraft armed with SRAAMs. As is always a good practice, the first step to countering SRAAMs is to maintain good situational awareness, if the first time you are aware of an SRAAM is when you get the missile warning at the top of your screen (AB & RB), you are usually as good as dead. To avoid an SRAAM most of the work you do will have to take place before the missile is launched.

To start with you need to keep an eye out for enemy aircraft that can hold the SRAAM; you need to identify any of them lining up for an attack run as soon as possible and take action accordingly. The main drawback of the SRAAM is its short-range, missiles fired much outside of 1 km have a significantly reduced chance of hitting their target, and by the time you get to more than 1.2 km hitting a target is exceedingly rare (unless the attacker has a significant speed advantage over you). With this in mind, your best tactic is to keep your distance from the enemy aircraft, if you are in a supersonic aircraft this should be relatively easy, however for other subsonic aircraft this can be difficult. If simply outrunning your attacker is not possible then your options are limited, but still there.

Like all heat-seeking missiles, the SRAAM will lock onto the sun if its IR seeker passes to close to it. If you see an SRAAM-armed aircraft on your tail then flying towards the sun (not necessarily directly at it but within 10 or so degrees of it) will prevent the enemy obtaining a lock on you; obviously this is often not possible in-game, but can certainly buy you time in some situations.

Another key thing to note is that despite its incredible manoeuvrability the SRAAM is not an all-aspect missile, so can only keep track of you from behind.

If the missile is already on its way to you, and you are not already doing something about it, then you are usually going to end up back in the hangar within the next few seconds; however there are some last-ditch attempts you can try (although don't expect them to work every time, or even most the time). If the missile was fired from around 1 km away then by turning one way, then hard the other once the SRAAM begins to turn you can sometimes throw it off or keep it flying long enough that it exceeds its maximum flight time (3.7 seconds) and explodes. If however the missile was fired from a closer range you will have to just try to dodge it and hope for the best. Usually, the best way to dodge the SRAAM is to pull into a sort of barrel roll, or otherwise carry out a manoeuvre, which involves rolling the aircraft; SRAAMs generally find it much harder to follow you through these manoeuvres than through a simple turn.

If you overshoot a target, carrying SRAAMs then pull hard up immediately; if you carry on straight, or go below the target you are just asking to get an SRAAM fired at you. Likewise, if you pull away to the side then your opponent will find it much easier to turn after you and get a lock than if you pull into the vertical.

Following the widespread use of early air-to-air missiles in the Vietnam War, it became apparent that such weapon systems had major limitations. They would frequently lose targets due to their IR seekers having a narrow field of view, or the missile not being manoeuvrable enough to keep on the tail of the target. In 1968, a team of engineers working at Hawker Siddeley Dynamics (the missiles division of Hawker Siddeley) began work on a new short-range air-to-air missile to address these shortcomings; the company funded the project as a private venture under the name "Taildog". The missile was to have an IR seeker with a wide field of view, capable of keeping track of targets under all conditions and would have to be extremely manoeuvrable.

The Taildog missile would be 2 m long and make use of thrust vectoring to give it excellent manoeuvrability. In 1970, the Ministry of Defence (MoD) decided that a new air-to-air missile with better manoeuvrability than the other missiles that were in service at the time was required. Hawker Siddeley Dynamics adapted their Taildog missile design to meet the new requirements and after evaluation, they were awarded the contract in 1972. Work on the programme continued under the name of Short Range Air-to-Air Missile or SRAAM. The SRAAM would be bigger than the Taildog (2.75 m long instead of 2 m) and feature a better thrust vectoring system. Due to budget cuts, the government cancelled the SRAAM program in 1974, instead choosing to pursue the Skyflash missile (a British upgrade to the United States AIM-7 Sparrow missile). The SRAAM program continued however until 1978 as a technology demonstrated.

In 1977, Hawker Siddeley Dynamics merged with the missiles division of British Aircraft Corporation (BAC) to form BAe Dynamics (other companies, including the rest of Hawker Siddeley, merged to form the remainder of British Aerospace (BAe). Starting in 1980 BAe Dynamics used research from the SRAAM programme to help with the development of the Advanced Short Range Air-to-Air Missile (ASRAAM), which is still in use to this day.

The SRAAM was 2.75 m long and weighed 70 kg. In-flight the missile was carried in a lunch tube to protect it until it was fired; once fired the missile had a series of small fins which unfolded to air stability (although they were fixed in place once deployed so did not help control the missile). In the life of the programme eight missiles were fired, some of which from Hawker hunter F.6 XG210. There was an incident during testing where immediately after launch the missile turned sharply after launch and almost collided with the Hunter that fired it.

The SRAAM has also been seen on the Trainer 2 seat version of the Harrier GR.1, they were only mounted for exhibition purposes.

How to use the SRAAMS in Warthunder - hachersk_Anon (Short Guides Competition Winner)
The Shooting Range #150 - Pages of History section at 05:06 discusses the SRAAM.