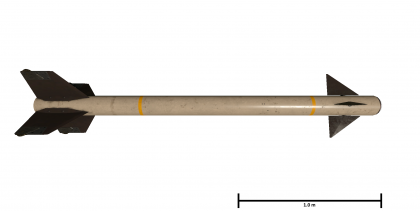 The Shafrir missile (scale is approximate)

The Shafrir is an Israeli Infrared homing air-to-air missile, it was introduced in Update 1.87 "Locked On". The design of the missile resembles the AIM-9B and it performs similarly to it in game.

Found in-game on the Israeli Vautours and Sambad. They can be used on the Vautours to turn the bomber into a pseudo heavy fighter/interceptor. They are best used at the start of the game when you have more energy than the enemy who has just taken off, and when the enemy does not know you are behind them. If you have used the AIM-9B or R-3S before, you will get used to these missiles quickly.

The Shafrir 1 is the first of the Rafael Python family. Designed to fulfil the IAF's demand for a domestic air-to-air missile to reduce reliance on foreign countries, the Shafrir 1 was originally intended to be mounted on French-built Mirages, but because of their poor performance to what they were expecting, development on the much more successful Shafrir 2 was started immediately. After the Shafrir 2, all further missiles in the family would be called Python, and subsequent missiles had all-aspect capabilities.