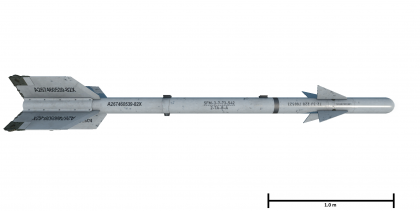 The PL-2 missile (scale is approximate)

The PL-2 (霹雳-2) is a Chinese infrared homing air-to-air missile, it was introduced in Update 1.91 "Night Vision".

8.8 kg of TNT equivalent explosives, which does shrapnel and explosive damages to aircraft.

Since PL-2 is the direct licensed copy of Soviet R-3S (AA-2 Atoll) missile, which was reversed engineered from USAF's AIM-9B, these 3 missiles perform very similarly with PL-2 and R-3S being identical in all statistics and both lagging behind AIM-9B a bit in terms of maximum firing range.

Just like other early IR AAMs, PL-2 suffers from a low tracking rate and overload, and this problem is worsened due to the overall higher mass over its American counterpart. PL-2 is most effective in finishing off careless targets or those that have just depleted all their energy in manoeuvres. It might sometimes have surprise kills over 2 km but this is rare so in most cases launching within 700 m to 1.8 km is the way to go.

PL-2, a licensed copy of a reversed-engineered missile- R-3S (or K-13/AA-2 Atoll) which was based from USAF's AIM-9B and the story of these missiles goes back to September, 1958; the month when the very first man-to-man aerial missile kill happened.

One day, after dogfighting with ROCAF F-86F-40, a pilot of PLAAF found a surprising "gift"- an UXO of AIM-9B struck in his MiG-17's (or J-5) wing. After bringing his fighter back to base, PLAAF technicians removed this missile and reported back to the Central Military Commission, this missile was then handed to the Soviet Union for further study. Along with data provided by a spy in Sweden, the Soviets successfully reversed-engineered AIM-9B and thus, R-3S was made.

Later in 30 March, 1961, the Soviet Union has signed technology transfer memorandum and licensed MiG-21F-13, its engine, and R-3S to Mainland China. A year later, with a sample handed to the Chinese, they started pre-production run of the missile and eventually, this missile came into PLAAF's service as the PL-2 and served them for more than 3 decades, as well as different foreign users. Later in 1970s when PLAAF got their hand on another AIM-9E from USAF, they reverse-engineered it and made PL-2B with better rocket engine and fixed the long-lasting problem of the fuse going off before hitting its target.