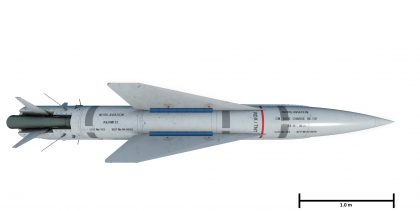 The AS-30 missile (scale is approximate)

The AS-30 Nord is a French manually-guided air-to-ground missile. It was introduced in Update "Starfighters".

The AS-30 Nord is an air-to-ground missile developed by Nord Aviation. It is a precision attack weapon intended to be used against high value targets such as bunkers and bridges. The AS-30 is derived from the older AS-20, they are almost identical and the only key difference is that the AS-30 is much larger. The AS-30 uses a MCLOS guidance system, meaning that the player must fly it manually to the target using special keybinds.

The AS-30 Nord is an AGM capable of obliterating any ground vehicle if hit directly, however most of the time, a precise shot isn't required as the splash damage is still adequate enough to destroy or at least heavily cripple a vehicle. While at first sight, the penetration of just 81 mm might seem very low for what the missile is, one should take note of its astonishing 115.3 kg explosive filler. The explosive filler allows the complete obliteration of a vehicle if the roof, sides or the rear are struck by the missile but as mentioned above, it has enough explosive filler to destroy or at least heavily cripple a target if it isn't hit directly.

It uses an MCLOS guidance system (the user has to manually guide it towards the target with their keyboard) and so it might be quite a cumbersome experience at first, but once the user learns how to properly control the AS-30 Nord, it will be a force to be reckoned with.

Thanks to its 115.3 kg explosive filler, the splash damage it produces is more than enough to knock out any vehicle in a single shot. The penetration itself is not all that great at 81 mm in all distances and angle of attacks, but it is justified by the explosive filler so in this case, the penetration force is almost irrelevant.

Because you can carry only a limited number of AS-30 Nord's (Two on the Vautour IIN, one on every other aircraft), it is highly recommended to use it against high priority targets. If you see that your team is having troubles with a specific hostile vehicle, you can try to track it down and destroy it with the ATGM and then continue to use up your other suspended armaments, like SNEB type 23 rockets, as most of the loadouts that have the AS-30 available are also tied to SNEB rockets.

It is best to use the ATGM first and as soon as possible, as it is heavy and will impact your climb rate and max speed quite a lot. Even though the maximum range of the AS-30 is 8 km, it is highly not recommended to launch the missile from further than 2 km as it will become harder to control and you'll be giving the enemy a chance to take cover.

The first AS-30 development started in the 1958 and it was derived from the AS-20 and was almost exactly identical to it. The key differences were that the AS-30 had improved range and a much larger warhead. The AS-30 has four large steeply swept back fins like the ones that exist on the AS-20, cruciform in cross-section around the midsection of its body. But because of the much larger size of the missile compared to the AS-20, it had to have extra four smaller fins towards the rear of the missile to add more stability during flight.

Because of the complaints about MCLOS and how it is difficult to aim the missile this way, in 1974 a new development for a new missile has begun, the AS-30L. The AS-30L is almost identical to the AS-30 as the only key difference is that the 30L variant uses laser homing guidance as opposed to MCLOS and in terms of appearance, the nose of the 30L variant is much more blunt instead of being sharp like the 30 variant. The AS-30L was designed for longer attacks which required much more accuracy, something the AS-30 could not achieve.