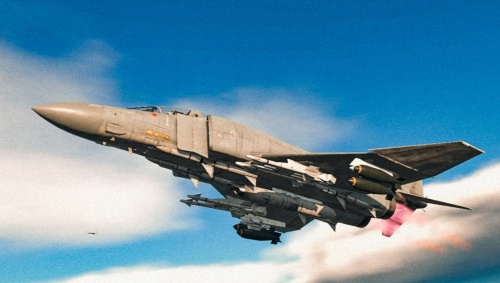 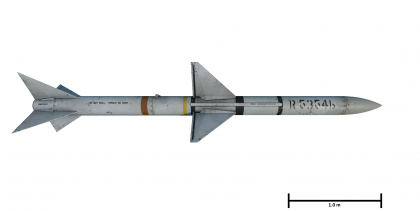 The AIM-7E Sparrow is an American semi-active radar-homing air-to-air missile. It was introduced in Update "Raining Fire"

The AIM-7E has a new propulsion system based on a solid-fueled rocket which increased its range and performance compared to previous variants. The missile needs 1.8s after the launch to start tracking its target, then it needs 2.7s to become fully manoeuvrable. It can pull up to 25G.

The AIM-7E has a 30 kg (65 lb) MK 38 MOD 0 continuous rod warhead with 9 kg of PBXN-4 high explosive. It is capable of destroying fighter-sized targets with a single hit in most cases.

The AIM-7E Sparrow is one of the better SARH missiles in the game with decent range. It's comparable to the Soviet R-23R missile, both need almost 5s to get full manoeuvrability after launching them, but the Sparrow has longer range and can pull 5G more. The Soviet missile is also heavier, but with more of explosive.

The ideal time to use this weapon will depend on the target's speed altitude and if the target has a Radar Warning Receiver (RWR) or not. Targets without RWR can often be attacked with the missile from considerable range since they will usually not be aware of the impending attack. In general, lower, faster and more aware targets require you to be closer to the target. If you get too close (anywhere less than 4 km usually), the missile begins to lose effectiveness as at these closer ranges it does not have time to accelerate to its top speed. The stated range on the stat card is an ideal range against a high altitude target that is unaware and heading towards you, more realistic engagement ranges tend to be closer to 8-12 km. Hits beyond 20 km are practical but only under ideal circumstances. A squadron of Phantoms with 4 AIM-7E Sparrows each can dominate the high altitude realm very well.

When engaging other Sparrow-equipped aircraft, a good knowledge of manoeuvres such as the F-Pole will serve you well.