The AIM-9G Sidewinder is an American infrared homing air-to-air missile. It was introduced in Update "Raining Fire".

The AIM-9G is part of the AIM-9 Sidewinder family of short-range infrared-guided air-to-air missiles designed by the US Navy during the early 1950s. The Golf variant improves on the previous AIM-9D model by heaving more reliable electronics. The lock-on range, speed, and launch range remain the same as with the Delta. However, the Golf model has a reduced explosive mass as compared to the Delta, although this shouldn't affect its performance too much. As with all Sidewinder variants pre-Lima model they can only attain rear-aspect locks consistently.

Note that you won't be able to use the Delta variant on USAF aircraft; contemporary USAF aircraft may equip the AIM-9E instead.

The AIM-9G is primarily a short-range air-to-air missile which requires a rear aspect IR signature to lock on to a target. The Golf models have an improved acquisition envelope making target tracking easier and at steeper angles. The missile is also able to sustain higher Gs which increases horizontal engagement hit ratios and target lock. As a short-range missile, recommended rear engagement distance is around 1-5 km, any closer launches may not give adequate time for the missile to track and manoeuvre. With horizontal engagement, lock-on distance is around 1-2 km depending on the approach angle.

When locking on, ensure that the target track is not a friendly or the sun, as the IR missile cannot differentiate between heat signatures. The most ideal engagement is a rear aspect as the enemy's engine will provide a perfect source of thermal energy for the seeker. The AIM-9G can handle offset horizontal engagements better then previous models due to the higher G load and improved seeker envelope. However you will still have difficulty acquiring the thermal signature of an aircraft unless you are within 1.5-2 km, at this shorter distance the heavier missile may not be able to manoeuvre fast enough or acquire the target.

As the United States Navy improved on their initial Sidewinder model (AIM-9B) to the AIM-9D, another feature that the China Lake development team, headed by Chuck Smith, wanted to introduce into the missile was the Sidewinder Expanded Acquisition Mode (SEAM).[1] SEAM allowed the Sidewinder to follow the aircraft's radar search pattern and target acquisition.[2] Being able to seek around a 25 degree angle in a circular scan, the Sidewinder would have a better chance of acquiring targets than earlier models that just aimed straight ahead. This feature, along with some solid-state module upgrades, were incorporated in the US Navy's next Sidewinder model, the AIM-9G. The improvement was sufficient that the initial order of 5,000 AIM-9D seekers was cut at 1,850 units and the rest were built in AIM-9G seeker specifications.[1] A total of 2,120 AIM-9G missiles would be built by Raytheon between 1970 to 1972.[2] As the AIM-9G consisted upgrades to the seeker and electrical components, it did not differ externally from the AIM-9D variant. 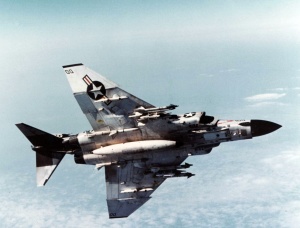 A F-4J Phantom II from VF-96, attached to the USS Constellation (CVA-64), equipped with either AIM-9D or AIM-9Gs (their external features are identical).

The AIM-9G would see use alongside the AIM-9D as the US Navy's choice for IR missile during the Vietnam War. A total of fourteen aircraft were claimed to have been downed by AIM-9Gs fired from a US Navy F-4J Phantom II plane, seven of which were MiG-17s and the other seven MiG-21s.[3] During Operation Linebackers I and II in 1972, the US Navy recorded a high 46% hit rate with their AIM-9G, which is credited both to the missile design and USN fighter pilot training from the Navy's Fighters Weapon School, also known as TOPGUN.[4] The United States Air Force attempted to obtain AIM-9Gs from the US Navy due to poor experience with their AIM-9 Sidewinders models B, E, and J. However, the US Navy's AIM-9s were not compatible with US Air Force's Sidewinder launchers due to the differences in cooling mechanisms (the US Navy's Sidewinder cooled by a nitrogen gas container installed on the launcher that the USAF did not have).[1]

While the AIM-9G was thought to have been the peak of the Sidewinder's capability at the time, several engineers at Philco-Ford (some of which helped create the first Sidewinder at China Lake) were brought in to continue improving the AIM-9 reliability, and one proposal was to convert all remaining missile electronic components to solid-state.[1] The AIM-9G converted to an all solid-state technology, as well as an increased seeker tracking rate of 20 degrees/second, was designated the AIM-9H. This was introduced into the Navy in 1972 and 7,700 units would be produced between 1972-1974 by Philco-Ford and Raytheon.[2]