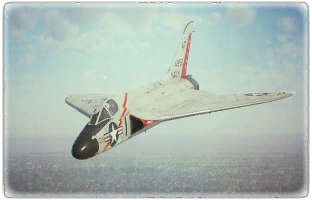 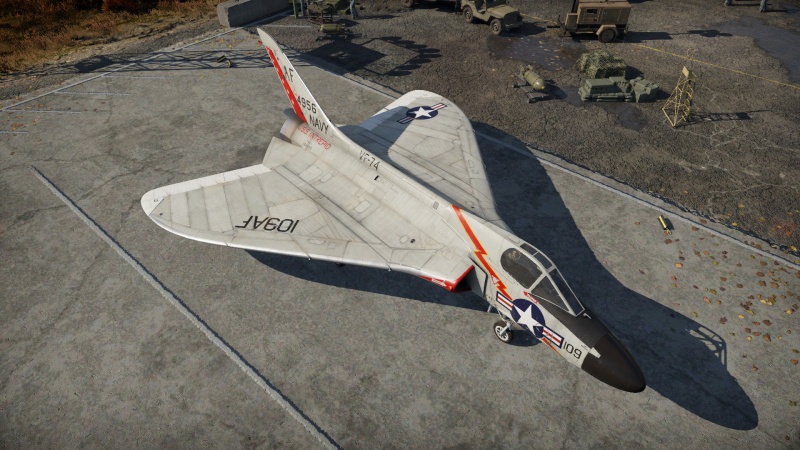 The F4D-1 Skyray, later known as the F-6A under the 1962 Tri-Service aircraft designation system, is a gift rank VI American jet fighter with a battle rating of 9.3 (AB/SB) and 9.0 (RB). It was introduced during Update "Danger Zone" as a reward for the 2022 Summer Quest event.

The last subsonic carrier-based jet fighter adapted into USN service by Douglas, the Skyray offers sufficient speed at its rank with a large wing, boosting its overall climb rate and allowing it to fly in transonic speeds without any fatal structural damage. However, players do have to beware of its outdated design of wing-mounted guns, whereas most jets of the era put them on the centreline instead, as well as severe bleeding of speed in manoeuvres due to the large wing.

At first glance, players will notice its enormous delta wings, while this helps with its climbing speed and overall structural integrity, as well as holding more fuel for longer fights; this also means that with the help of slats and flaps, it can be a fearsome dogfighter thanks to its powerful Pratt & Whitney J57-P-8 engine with an afterburner at transonic speeds - even supersonic at higher altitudes or in a dive. The plane is very stable across all speeds and its very rare that you ever reach its redline of 1,283 km/h, although you will need to factor in compression at higher speeds (above ~950 km/h). The delta wing provides a good instantaneous turn rate, though also causes severe energy bleeding in manoeuvres, and the overall large size also means that it will become an easy target for enemy jets with higher energy. So be aware not to dogfight for too long, else the F4D-1 will not be able to gain back enough energy, even with its good acceleration, to escape from the turmoil and lead you straight back to the hangar.

The only protection on this aircraft is a 8 mm steel plate right in front of the pilot; although it is practically useless against autocannons, it may sometimes save you from head-on .50 cal strafes. Another bad news is that the tanks are not self-sealing, so there is very high chance that players will not survive if set afire, unless at very low fuel - in which case they will no longer have enough fuel for an escape.

The F4D-1 can be outfitted with the following ordnance presets:

Players who fly the A-4 series will feel familiar, since Douglas adopted a similar design of delta wing and autocannon on the F4D-1. Other traits are very similar as well, particularly the manoeuvrability and ballistics. While it has 2 pairs of guns on its wings, a concentrated burst on an enemy will certainly be their demise. Its overall high manoeuvrability and angle of attack (AoA) also helps to gain a slightly longer window to take out enemy aircraft, so long as you stay aware of your speed and keep turns below 950km/h, as this plane does lock up vertically in speeds greater than about 950 km/h. Beware of being stalled by manoeuvres: although the F4D can gain its speed back relatively quickly, this can leave enough window for enemies to lay their guns on your plane. So either be quick with taking down your target or evacuate from the battlefield for another attack run. Fuel is limited to 25 minutes, which goes fast when on full afterburner, so keep an eye on it.

If ground pounding is your objective, chances are players will find the FFARs useless against ground targets in ground RB and even in air RB due to its explosive content; the task is made slightly easier with the ballistic computer, but do not expect a solid kill aside from light vehicles.

The program for F4D Skyray traces back to a German aerodynamic engineer, Alexander Martin Lippisch. As one of the pioneers of rocket-powered aircraft (the designer of the Me 163) and supersonic designs, he had also been interested in many other new aspects of aerodynamics, including tailless aircraft, and one design stood out - delta wings. As part of the efforts to gain the upper hand against the Soviet Union before the end of the European Theatre of WWII, Lippisch and his designs were among part of Operation Paperclip to bring German engineers to the US.

As the tension between the two great powers rose and the creation of high-speed jet bombers such as the Soviet Tu-16 Badger, the need for a jet that could climb as fast as possible arose as well. The USN wanted a new jet interceptor that could climb to around 15 km/50k ft within 5 minutes of combat alarm while putting Lippisch's (working for Convair by this period) design into good use. Ed Heineman (also the designer of the A-4 Skyhawk) of Douglas Aircraft Company adapted the designes for use and the prototype XF4D was built by 1951 and flew into the skies on 23 January 1951. The prototypes used Allison J35-A-17 turbojet engines, then changed to a Westinghouse J40-WE-8 with afterburner. As the tests went on, the record of top speed at sea-level was broken on 3 October 1953 by Lt. Cmd. James B. Verdin, and this also earned Ed a Collier Trophy from NAA. After its 5 years of test flights and evaluation, the USN became the first user of the F4D and stationed them at San Diego as part of the NORAD North America defense network against possible assaults; USMC and NACA (later NASA) used it as well.

As the demand for a multi-role jet rose, the F4D (by the time F-6 under the new Tri-service designation) was soon withdrawn from use as a dedicated interceptor in 1964, replaced by the McDonnell Douglas F-4 Phantom II.