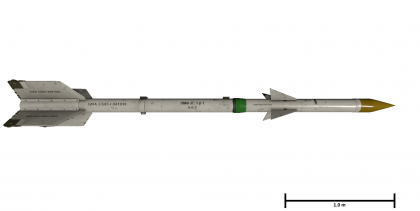 The R-3R missile (scale is approximate)

The R-3R (K-13R, AA-2C 'Atoll') is a Soviet semi-active radar homing (SARH) air-to-air missile. Based on the R-3S missile, the missile shares maneuverability and warhead characteristics that makes the missile more viable at shorter ranges.

Warhead has a TNT equivalent explosive mass of 8.8 kg which is usually sufficient to destroy targeted aircraft that come within the fuse detonation range with one hit. It does however have the lowest explosive mass of any radar guided missile in-game.

The R-3R is equipped with an identical warhead to that found on the R-3S.

As with other radar missiles, acquiring stable radar lock is easiest at higher altitude. The R-3R performs best at and above 2,000 m, however it can lock onto an enemy above you even at low altitude should you pitch up steeply to avoid ground clutter. Due to the missile's relatively low speed of Mach 1.7, long-range intercepts are unreliable as the missile will struggle to intercept before running out of fuel. One good remedy to this issue is to pick up higher altitude targets with your radar and approach from head-on either level or slightly below the enemy's altitude. Spool up the missile but do not fire from further than 5 km out as missile lock can be intermittent beyond this. When fired in a head-on between 5 to 1.25 km, the missile has a significant chance of successful intercept if you maintain radar lock with the target and they fail to make significant evasive action. Missiles fired in a head-on close in at much greater relative speeds thus little time is provided to evade.

Work began on adapting the R-3S missile with a Semi-Active Radar Homing (SARH) warhead in 1961 under the bureau designation Izdeliye 320, with expectations that it could be used in high-altitude engagements.[1] Though limited by the dimensions of the R-3S missile, improvements could be made to the warhead, rocket motor, and fins. In the front, a new semi-active radar seeker was installed, surrounded by dielectric fairing. For the rudders in front, a new rudder actuator package was installed that attached an electronic module that adjusts the rudder deflection to better suit the missile's flight based on altitude and target distance. Behind the rudder was the warhead alongside the new Yastreb radar proximity fuse, the latter which has a diameter wider than the missile's body, creating a bulge in the missile body that contains the fuse's transmitter/receiver antennas.[2] It is not known what specific upgrade, if any, were done to the rocket motor. These modifications to the missile increased the length by 580 mm and the weight by 7.1 kg.[2]

A fixed acquisition "training" round was also produced for the R-3R, designated the R-3RU (Izdeliye 328) which was effectively a R-3U (training round for the R-3S) with a SARH seeker installed and with the fins retained without rudder nor rollerons.[2]