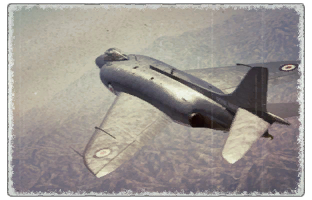 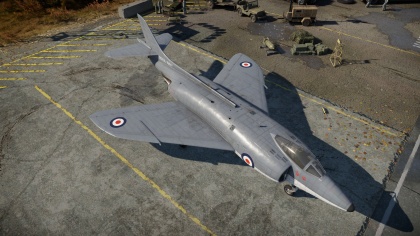 The Scimitar F Mk.1 is a rank VI British jet fighter with a battle rating of 8.7 (AB/RB/SB). It was introduced in Update "Starfighters". 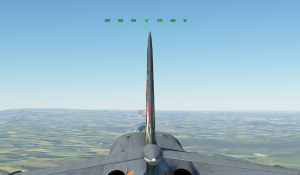 The Scimitar F.1 is a relatively large and heavy aircraft, but it is still extremely capable because of its impressive engines. The Scimitar's two Rolls-Royce Avon 202 engines put out 4,650 kgf of thrust each, giving the Scimitar its fantastic climb rate of over 100 m/s. This outclasses similarly placed jets known for their climb rate (such as the MiG-15) by almost 2 times, and it's capable of gaining speed in a 45° climb. The impressive amount of power means that, assuming you aren't uptiered to 9.7, you will always be the first off the airfield and into combat. The Scimitar has a max speed of just over 1,160 km/h or mach 0.95 on the deck, enough to outrun anything at its BR, and even some missiles too.

The Scimitar turns surprisingly well for its size and weight, thanks to its all-flying tail, and large control surfaces. It will be able to hold its own in a turnfight with most, and can quickly accelerate out of trouble if needed. You should not be turning for too long, as the Scimitar still loses its energy quite quickly in a full turn.

However, we now come to the biggest con of the Scimitar: its rudder. The rudder will lock up gradually until about 700 km/h where it will lose 99% of its effect, making it unusable, and trying to turn or aim conventionally is impossible, often leading to the plane wobbling itself into an uncontrollable flatspin that you can't escape, because you have no rudder control. It is recommended because of this that you only engage low energy targets and use the element of surprise so they cannot evade. The Scimitar does get 4 x AIM-9B missiles, and these can be used on targets that use your lack of a rudder against you.

The Scimitar has one glass 50 mm plate in front of the pilot, and one 12.7 mm steel plate behind the pilot. It has very low survivability because any wing damage will lead to a flatspin, due to its lack of rudder control.

The Scimitar F Mk.1 is armed with:

The Scimitar F Mk.1 can be outfitted with the following ordnance:

The poor rudder of the Scimitar makes getting two modifications a high priority. The New boosters modification provides a noticeable improvement to the rudder control of the Scimitar and is your absolute top priority, as any rudder improvement you can get will make getting guns on target, and flying the aircraft in general, more bearable. Even with the New boosters modification getting guns on target can still be rather hard; therefore the next priority is AIM-9B missiles as they give you another way to kill enemy aircraft, which is less reliant on rudder control. Even stock the Scimitar exhibits very impressive flight performance for its battle rating, this means flight performance upgrades (with the exception of New boosters) are not as important as on other jets. Starting at tier 1, you will want to unlock the rockets (to start progressing towards AIM-9Bs), then at tier 2 unlock the New boosters modification and then the bombs. At tier three do your choice of flight performance modification followed by the Bullpups (unless you want the bullpups for Tank RB, in which case get them first); finally get the AIM-9Bs at tier 4. From here on you can unlock the remaining modifications according to user preference.

If you find unlocking modifications difficult due to the lack of rudder control then the stock ADEN belts are capable of killing light pillboxes / light ranks (and medium tanks with some more difficulty), allowing you to get a decent amount of RP per game through ground attack. The suspended armaments can also be used for ground attack or base bombing.

The Supermarine Scimitar was a naval strike aircraft with a limited production run for the Royal Navy's Fleet Air Arm. The Navy's specifications required the aircraft to be effective in a strike-fighter/attacker role which consisted of proficient manoeuvrability at low altitudes and plenty of ordnance options for ground attack operations. Issues with the desired handling became apparent quickly as it was the heaviest aircraft to see service for the Fleet Air Arm; weighing 34,200 lb even before being equipped with four 1000 lb bombs or AGM-34 bullpup missile configurations. Nuclear capability was also planned for the aircraft through the use of a Red Beard nuclear bomb was uncertain and never fully realised.[1]

With aircraft carriers modernising, and the Royal Navy requiring an upgraded capability to strike at sea, the experimental aircraft took its maiden flight on the 31st of August 1951. The first prototype emerged, powered by significant thrust generating Rolls Royce Avon jet engines. 11,250 lb of thrust combined with flaps and a system to redirect the thrust downward with the use of small vent ports just in front of the flaps, pushed the stall speed back allowing for theoretically safer carrier landings and generally more dextrous low-speed manoeuvres. This was a necessary innovation as most British carrier decks were short and snug due to the budget constraints. Scimitars remained on land at RAF bases whilst undergoing thorough testing for their safety and competency. The potency of the thrust from the Avon engines was proved when a pilot successfully managed to perform a take-off with the parking brake on. The third prototype design was the first to feature swept wings which would remain for the rest of the aircraft's short life.

By January 1957, testing began on the Royal Navy's flagship, HMS Ark Royal; and around the same time, the first operational model would leave production. The aircraft already plagued with several incidents in testing would see 803 Naval Air Squadron's wing commander lose his life in the Persian Sea after a brake failure caused the aircraft to fall overboard during a landing. Further adjustments were made to the delicate aircraft such as the method of launching it at an upward angle with the use of a 'bumper' on the back. It would hold the aircraft in place as it was hoisted skyward until the nose gear was suspended off the ground. This position allowed the noticeably weak catapults to launch the heavyweight of the aircraft.[2]

The Scimitar never saw any combat though served operationally with the Royal Navy in the Persian Gulf to deter tensions developing from Iraq at the time. Some sorties were undertaken to test the capability of the aircraft's missile and rocket payloads, but live bombs were never sortied because of fears the risks were too great, and the training was too dangerous; therefore practice bombs were often used instead.[2]

The 100 orders for Supermarine Scimitars would ultimately never be fulfilled. Only 76 units were delivered, of which 39 were lost to non-combat accidents; therefore 51% of all Scimitars produced were lost. Moving forward the carrier-borne strike fighting role was undertaken by the de Havilland Sea Vampire. The Supermarine Scimitar would ultimately become a prize piece of engineering, spending the last of its years stunning in air show performances where it did succeed. The Scimitar had a short and constantly troubled history which looked doomed to failure from the beginning; the Royal Navy was subsequently deemed unable to operate such an intensive aircraft which required enormous cost, time, expertise and top-spec equipment to allow its success in operations, none of which the Royal Navy had enough of at the time. On 19 October 1966, the Scimitar was retired from the Naval Air Squadron and in December of 1970 the last Scimitars flew, with pilots still avowing that the aircraft was 'a delight to fly'.[1][2]

Development of what would eventually turn out to be the Supermarine Scimitar began as early as the late 1940’s, with the Supermarine company starting work on developing an undercarriage-less naval jet fighter, following a specification issued previously by the Admiralty.

During development, several prototypes were built and tested while at the same time the design of the machine continued to change and evolve. Eventually, however, the undercarriage-less concept was dropped and the machine was even reclassified to a low altitude strike aircraft, with the Royal Navy ordering 100 units of the latest prototype design - the Type 544 - into production in 1954. The Type 544 prototype first flew in January 1956, while the first production version of the Scimitar ran off the assembly line a year later in 1957.

The Scimitar entered service with the Fleet Air Arm in 1957. However, the carriers of the Royal Navy at the time were rather small while the Scimitar was a relatively large aircraft resulting in high accident rates which would plague the Scimitar’s service career. Furthermore, the Scimitar was a highly demanding aircraft from a maintenance standpoint, making it even less popular with its crews.

As a result, the Supermarine Scimitar only had a relatively short service career with the FAA, which withdrew the Scimitar from active service in 1966. From that point, the Scimitar was relegated to training units and continued being used as a training aircraft until 1970 before being ultimately decommissioned from active service. In total, 76 Scimitars were built during their limited production run, of which 39 were lost on account of various accidents.