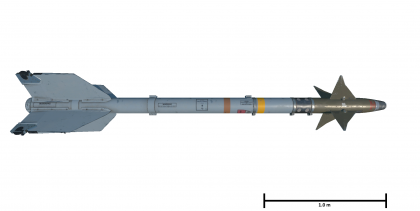 The AIM-9L Sidewinder is an American infrared homing air-to-air missile, it was introduced in Update 1.85 "Supersonic".

The AIM-9L entered service in 1977 as the first Sidewinder with all-aspect capabilities. It was first used by a pair of F-14 Tomcats in 1981, successfully destroying two Libyan Su-22s. Its first large scale usage was by the United Kingdom during the Falklands War, with an 80% launch-to-kill ratio.

The AIM-9L variant is the first Sidewinder since the AIM-9B to be jointly used by the USAF and the USN, and was jointly developed by the two branches as well. It is directly based on the USN AIM-9H, but features improvements utilized in the USAF AIM-9J, including a new radar-slavable uncaged seeker head. It features an intermediary payload between the two previous branches of Sidewinder, and an intermediary weight.

Compared to every other Sidewinder in-game, it has a ludicrous maximum overload of 30 Gs, 10 Gs short of what it could pull in real life, a motor burn time identical to the naval Sidewinders, a slightly longer rear-aspect lock range, and is the only Sidewinder to feature all-aspect IR lock, although front-aspect locks are very vulnerable to flares.

The AIM-9L is best used in rear-aspect within a 3 km range from the target. It is best used against targets who are unaware, do not have flares, or have low energy.

The experience with the AIM-9 Sidewinders in the Vietnam War and Yom Kippur War showed that there were still many improvements that could be made to the Sidewinder's performance. Low-altitude performance was poor due to environmental interferences on the Sidewinder's IR seeker, and the IR seeker was only able to attack from the rear to lock onto the engine exhaust of an enemy aircraft. Improving the Sidewinder's seeker capabilities to solve these issues became the key improvement for the next Sidewinder generation.[1] 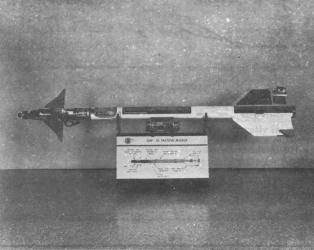 An AIM-9L missile on display. The canard fin shape is the most distinctive external feature of the AIM-9L.

The United States Navy had their own development team within China Lake that set to work improving their Sidewinders, which has so far culminated from the AIM-9B to the AIM-9D, AIM-9G and their latest AIM-9H. The US Air Force had their own development of the Sidewinder splitting off from the US Navy's AIM-9B to the AIM-9E and AIM-9J. The US Navy and US Air Force's Sidewinder models were not compatible between the two service branches due to differences in seeker cooling methods. The United States Air Force desired to continue their own missile program named "CLAW", which called for the use of smaller, cheaper missiles so more could be fired at a time. William Perry, the Defense Department's deputy director of research and engineering, disapproved of this path and told the US Air Force to work with the US Navy to work together on a common IR missile for both service branches. The US Air Force, therefore, cooperated with the US Navy's China Lake team to share specifications and technology to produce the next missile. The US Navy would designate this program as the AIM-9H Product Improvement Package (PIP).[2]

The package prioritized improving the seeker with an indium antimonide seeker, which could detect the longer-wavelength infrared radiation given out of warm surfaces of aircraft parts, allowing the missile to obtain all-aspect capability (ALASCA) in acquiring targets.[2] Other improvements with the AIM-9H PIP were the long-span pointed double-delta canards, a new MK 36 solid-fuel rocket motor, WDU-17/B warhead featuring double-layer continuous-rod scheme, and a DSU-15/B Active Optical Target Detector (AOTD) laser proximity fuse system [3][4] The cooling system was improved to a TMU/72/B argon-gas cooling system that was contained within the missile's seeker, which allowed for use on both USAF and USN missile launchers.[1] The one feature that complicated the US Navy and US Air Force cooperation with the missile was the reticle seeker, with the US Navy desiring an amplitude-modulated (AM) seeker while the US Air Force desired a frequency-modulated (FM) seeker. An AM-FM system was developed by Raytheon,[2], which allowed the Sidewinder to use both traditional AM reticle that is effective in cloudy backgrounds with the benefit of the FM reticle reducing seeker error signal inputs from the target's increasing size as the seeker gets closer.[1][5] 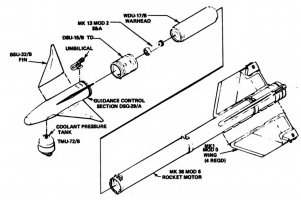 An exploded diagram of the AIM-9L and its components.

Another improvement Raytheon introduced in the AIM-9H PIP was a rate bias that caused the missile to aim slightly ahead of an aircraft's hot afterburner. Issues arose when the missiles' rate bias adjusts too far ahead and missed the aircraft from the front. Consultation with General Dynamics revealed similar issues had arose during the development of the FIM-92 Stinger missile, and the proper adjustments were made to solve the issue.[2] Sometime prior to 1975, the AIM-9H PIP would be designated as the AIM-9L. By 1975, the AIM-9L was tested in a joint navy-air force evaluation. Satisfied with the results, the AIM-9L missile was put into production in 1976 with both Raytheon and Ford Aerospace for a missile that was now jointly serving the United States Air Force and Navy.[6]

Foreign users were also sought out for the AIM-9L. In one case, the AIM-9L was contested against the German company Bodensee Geratechnik (BGT), which had developed an ALASCA seeker for a proposed Viper missile. To resolve this and bring BGT to help produce AIM-9Ls to European allies, the US Navy and Raytheon waived license and R&D fees for the AIM-9L, causing the end of the Viper missile development and provided AIM-9Ls to Great Britain, Norway, and Germany. Japan were also given the license to produce AIM-9Ls, which was performed by Mitsubishi. Between Raytheon, Ford, BGT, and Mitsubishi, more than 16,000 AIM-9L Sidewinders have been built since their production started.[4]

The AIM-9L would see action in separate theaters by different users in the 1980s. 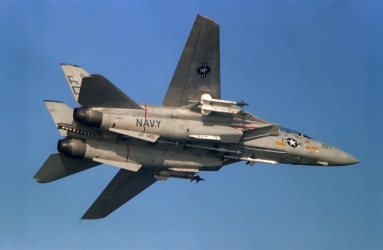 A F-14A equipped with a complement of AIM-9L Sidewinders and AIM-7 Sparrows.

In 1982, the British would extensively use AIM-9L during the Falkland War on Sea Harriers. Procuring and using the AIM-9L were difficult as when the British carrier task force set sail to the Falklands in 05 April 1982, only 19 AIM-9L were in inventory. Moreover, the new canards on the AIM-9L did not fit the Sea Harrier's launch rails below the wings, though this was solved by filing down the launch rails for the AIM-9L to fit.[10] Sea Harriers equipped with AIM-9L fought in engagements against Argentine A-4 Skyhawks, Super Etendards, and Mirage IIIs.[11] By the end of the conflict, a total of 27 AIM-9Ls were launched which scored 24 hits on Argentine aircraft, which translates to an 88% success rate for the AIM-9L missile.[12]

Another conflict in 1982 that saw AIM-9Ls being used was the Israeli-Lebanon war. The Israelis launched Operation Mole Cricket 19 on 09 June 1982 to eliminate a Syrian air defense network set up in Lebanon's Bekaa Valley. The success of the Israeli operation forced the Syrians to commit their MiG-21s and MiG-23s to prevent the Israeli Air Force (IAF) from achieving aerial superiority. The IAF, consisting of F-15 and F-16 fighter jets, retained control of the sky as Airborne Warning And Control System (AWACS) aircraft informed Israeli pilots of the presence of Syrian jets, which were then intercepted and destroyed at visual range with AIM-9Ls, Shafrir, or Python missiles. The AIM-9L reportedly earned a kill rate of 85% during this conflict and contributed to the Israeli claim of destroying more than 80 Syrian aircraft, which only had K-13 missiles to fight back against the IAF aircraft.[11][12] 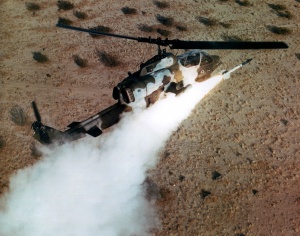 An AH-1W SuperCobra fires a AIM-9L from a wing-mounted missile launcher at China Lake.

Though AIM-9L was a successful Sidewinder variant, there were still more features and improvements to be introduced into the model. Infrared Counter-Countermeasure (IRCCM) capability, a smaller smoke signature from the motor, and an improved WGU-4/B guidance system were implemented into the AIM-9L PIP that became the AIM-9M, which saw use during the Gulf War.[4] The next significant AIM-9 variant to be developed was the AIM-9R, which attempted to evolve the AIM-9 design with the use of a charge-coupled device (CCD) detector, allowing the missile to use an imaging system to track the target. However, cost overruns, staff mismanagement, use of expensive and complicated components, and the fact the imaging system could not work in the night caused the backers of the program to lose faith and the missile was cancelled by the US Navy in December 1991.[13] 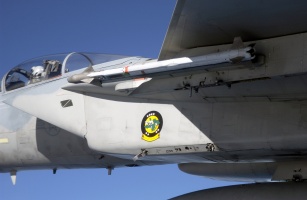 The most recent Sidewinder variant to see use is the AIM-9X, which uses the Mk 36 motor and WDU-17/B warhead from the AIM-9M, but the airframe had been redesigned with smaller fins and canards for lower drag and better flight performance. Rollerons have been removed from the Sidewinder's design as the flight control system was sophisticated enough to no longer need them. The WPU-17/B propulsion section uses a jet-vane steering system to steer the Sidewinder with thrust-vectoring. The result was a more compact missile that could fit within a fighter's internal bay, such as the F-22 and F-35.[4] The biggest improvement of the AIM-9X over the predecessors was the guidance, using a seeker that was developed for the AIM-132 ASRAAM with an imaging infrared array, cooled by a Stirling-cycle cryocooler.[3] The AIM-9X also introduced an "Off-Boresight" capability, allowing the missile to be used with the Joint Helmet-Mounted Cueing System (JHMCS) to acquire target with the pilot's helmet.[3][4] Continually seeing development as late as 2019,[14] the AIM-9X looks to be the main Sidewinder model for the 21st century aerospace.

An AIM-9L Sidwinder hangs off a F-14 Tomcat.