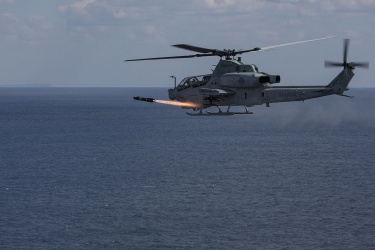 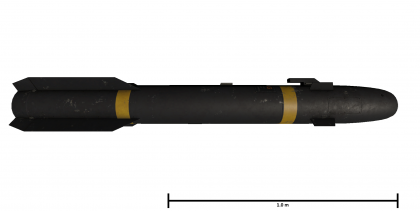 The AGM-114B Hellfire is an American laser-guided air-to-ground missile. It was introduced in Update 1.85 "Supersonic".

Initially added for the AH-1Z, it was later included with other vehicles that carried it as they were introduced. The AGM-114B features an impressive range with the ability to lock on to a target after launching (LOAL), giving helicopter pilots the ability to perform careful strikes on a target by hiding behind terrain to initially launch a Hellfire, starting near a mountain or hill to begin the attack, retreating behind cover, and then return to lock onto the target before the missile impacts to provide terminal guidance. The Hellfire requires precise methods to be effective, and cannot be used with any reasonable success in close range and direct fire engagements, but at range it can be a deadly weapon against ground vehicles, who have almost no warning of the incoming missile.

The AGM-114B is laser-guided with a maximum range of 8,000 m (~5 mi) and a minimum range of 800 m (~0.5 mi). There is no method to control the missile other than through the use of the laser and it must be placed on a viable target for the weapon to lock and track. Due to this, using the AGM-114B on aircraft is difficult, as any time that the laser is not directly on target is time which the Hellfire is not able to track although the use of the TV locking function can aid in this result. The AGM-114B has a narrow but very tall targeting limit, which allows for tracking a target even when at extreme height. The Hellfire also uses a lofting trajectory to engage targets, which gives the missile some ability to evade obstacles and terrain features and strike the target from an angled position.

There is a small amount of splash damage dealt by the AGM-114B, however, it is minimal and will do no effective damage to any ground vehicle with a serious amount of armour. Vehicles with no armour or only structural protection may suffer some critical damage for a near miss, but it must be an impact within a few metres of the vehicle.

The AGM-114 Hellfire uses a solid-fuel rocket motor developed by Thiokol and flies through the air with four fins with adjustable edges.[1] The laser seeker head of the Hellfire and track a target before launching and is capable of locking onto a target after launching. The AGM-114A has a maximum range of 8,000 m (8,750 yards) and uses an impact fuze to detonate a shaped-charge warhead. The AGM-114B is the version developed by the U.S. Navy for use by them and the Marine Corps which is largely the exact same as the AGM-114A with the exception of the Safing/Arming Device which allows for safe shipboard use as well as a new Thiokol rocket motor which produces less smoke.[1]