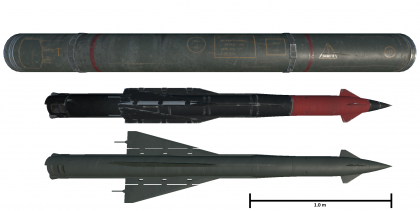 The Roland missile (the launch tube, missile with fins folded, and deployed missile are shown; scale is approximate)

The Roland is a Franco-German SACLOS-guided surface-to-air missile. It exists in three variants: Roland 1, Roland 3, and VT1, and was introduced in Update 1.89 "Imperial Navy".

The Roland SAM is a family of radar- and optical-guided surface-to-air missiles developed by Germany and France in the mid-60s until the late 70s. Its purpose was to defend mobile units and facilities such as airfields against low flying aircraft.

The Roland SAM was a project between Germany and France following the 1963 Elysée treaty. The goal was to create an all-weather capable, surface-to-air missile system to defend mobile units and important facilities like airfields against low flying aircraft. Development began in 1964 with the foundation of the Euromissile company by Aérospatiale and MBB and the first prototype made a guided launch in June 1968. The development was split between Aérospatiale, who would develop the Roland 1, and MBB who were to develop the all-weather capable Roland 2. The entire process however took longer than expected and was far more expensive than anticipated, especially due to the complexity of the system and the development of additional protection against electric interference.

Besides being in service with Germany and France, the Roland SAM was exported to many other nations, including the USA, where it became one of very few foreign SAM systems. Among the other nations that used the Roland SAM are Argentina and Iraq who were the only nations to use it in active combat. All in all, Roland missiles scored 3 confirmed kills (one British Sea Harrier downed by Argentine forces during the Falkland War, one RAF Tornado downed by Iraqi forces during the Gulf war, and a USAF A-10 Thunderbolt, also shot down by Iraqi troops during the same war). However, the suspected number of destroyed aircraft might be twice as high (one Sea Harrier (Argentina), one F-4 Phantom, one F-5 Tiger, two Tornados, and one A-10 Thunderbolt (Iraq)).