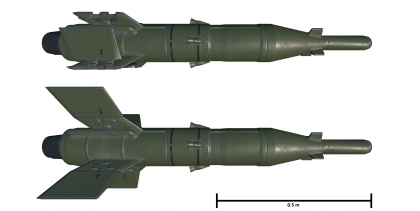 HJ-73E (Chinese: 红箭-73E) is a tandem-warhead ATGM based on the HJ-73 (which is a clone of the Soviet's 9M14 ATGM found on BMP-1), first introduced in the 1990s. It changes the guidance method from the original MCLOS to SACLOS, along with enhanced penetration capabilities.

Although the missile shares similarities to its predecessor, HJ-73, in terms of the appearance, the major difference is a probe on the tip of the missile which serves as the tandem warhead of the missile, and thus gives it an whopping overall penetration of 800 mm RHA within its firing range. In addition, it is a SACLOS (mouse-controlled) missile that gives players more control over its guidance.

While there were some improvements over the older models, this missile still suffers from a relatively low velocity (120 m/s, a little improvement over the HJ-73's 115 m/s); which means at longer ranges, the enemy might have some time to react over your missile by eliminating the player or the missile itself.

With its 1.83 kg TNT equivalent explosive mass, for lighter vehicles it can cause some blast damage to the hull that might cause hull-breaks; the nature of an ATGM also means it also causes penetration damages from the jet stream, melting anything that is in its way; thanks to the tandem warhead, even the heaviest targets with ERA might face some serious damage from it.

It is unrivalled at its tier with the whopping 900 mm penetration.

Due to the high penetration of the missile, very few tanks can stand up to it, even in higher tier battles.

But this missile still comes with a few drawbacks, like low explosive mass and longer immure zone (that is, it flies for some distance before guidance); but the most lethal of all, the slow velocity of this missile at 120 m/s (only shines over its predecessor for a mere 5 m/s and the Japanese Type 64 MAT which is infamous for its 85 m/s flight velocity).

There the best way of using this missile is stay behind the front lines and try to find stationary targets since it would be way easier to defeat them and try to stay hidden as long as possible; with the slow velocity of this missile, the player might meet his own end before the missile even impacts on the target.

Main article: History of the HJ-73