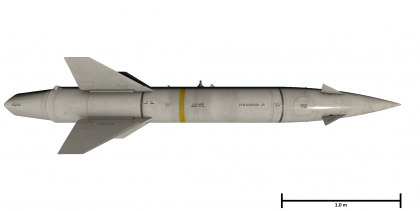 The AGM-12B Bullpup is an American manually guided air-to-ground missile. It was introduced during Update 1.79 "Project X".

The AGM-12B Bullpup inflicts high-explosive damage with low splash damage over a medium area. It is comparable in explosive power to a 250 lb bomb.

This missile is best used to take out tight groups of light tanks or AA units. It can also be used to destroy AAA and Howitzer emplacements.

Development of the AGM-12 Bullpup began in the early 1950s, after the Korean War sparked a demand for more precise, guided, weapon systems that could hit targets which were usually more difficult to hit with conventional ordnance. Apart from that, the new weapon system ought to increase the safety of ground attack aircraft and their crews by keeping them further away from returning ground fire.

A competition was ran by the U.S. Navy and the Martin company was awarded a contract in 1954. Work on the new missile, designated ASM-N-7, began and after several years of development and testing, the new weapon system entered service with the Navy in April 1959.

The design of the American first air-to-ground missile was fairly simple - a 250lb (113 kg) warhead derived from an aerial bomb, mounted on a rocket-propelled, roll-stabilized body. The entire missile was manually guided via radio signal to its target, using direct vision. To aid with aiming, two bright flares would ignite on the missile's rear end upon launch. These would make it easier for the operator to keep track of the missile in flight as it would be more visible.

The Bullpup was first employed in combat during the Vietnam War, although only seeing limited success. This was due to the fact that in order to ensure the highest probability of a successful hit, the aircraft that launched the missile had to fly the same course as the missile until impact. This of course, exposed the aircraft to anti-air fire and severely limited the pilot/operator's situational awareness in the case of single-seat aircraft.

Nonetheless, the Bullpup was still mass-produced for both the U.S. Navy and Army, resulting in around 30,000 units made across all of the weapon's variants. Although the missile was starting to be replaced in the '70s by more advanced systems, it wasn't until the '80s when the Bullpup was finally retired from active service.