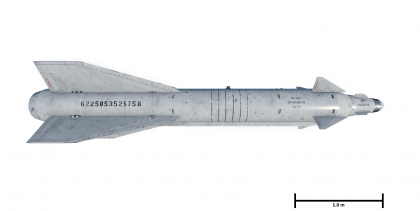 The Kh-29L missile (scale is approximate)

The Kh-29L is a Soviet laser-guided air-to-ground missile. It was introduced in Update "Ixwa Strike". It is a heavy duty Soviet air-to-ground missile, born from a similar fuselage design of the Molniya R-60, a laser seeker inherited from the Kh-25, and a powerful warhead. It features impressive range and destruction capabilities against a variety of surface targets, giving pilots a heavy duty weapon capable of decimating anything in their path.

The Kh-29L (9M721) is the biggest air-to-ground missile with its twin sister, the Kh-29T. It is comparable to heavy duty utility bombs carried by various planes, making it one of the deadliest missiles in-game. It is not only able to take out multiple targets at a time, but also the biggest targets such as battleships and aircraft carriers.

The Kh-29L is the most devastating and versatile air-launched guided missile when it comes to ground pounding. The explosive mass is something to be scared of. While smaller than most bombs, this is compensated for by the accuracy of the missile. It has a maximum range of 8,000 metres, 10,000 metres (5.4 nmi) if flight ceiling is high enough. As any other laser-guided munition, the target must be laser designated. Contrary to other laser designators (such as TIALD on Jaguar GR.1A), the laser designator features the same control use of the Kh-23M and Kh-25: nose guided control. For the same reason, the Kh-29L is a tricky missile to use on small moving targets at long ranges. It is particularly useful when facing stationary targets or big and slow targets. This is changed when using aircraft like the MiG-27 as they have their proper laser designator.

While the Kh-29L has relatively low penetration capabilities (103 mm at any range and angle), any hit will decimate the target due to the tremendous explosive mass it features. Due to the 148.99 kg TNT equivalent explosive mass, the missile is more than capable of destroying more than one target at a time if closely packed. The warhead is also particularly useful when facing off enemy vessels, specially aircraft carriers in Simulator Enduring Confrontation battles. Due to the carriers having actual damage models in a similar style to player controlled vessels, the use of this missile is more than capable of significantly damaging the carrier. There are multiple hit locations, but the most effective ones are the ones on the engine decks and close to the waterline.

You should first practice in custom battles to spot tanks from several kilometres away. While it's easier to aim and hit at close ranges, it is also easier to be identified and eliminated by an anti-air vehicle. The missile isn't significantly faster than your plane, (assuming your plane is cruising at Mach 1 while in a dive to use your nose-mounted laser) so depending on the situation, you might want to consider deploying brakes after launching the missile to maintain maximum distance from anti-air vehicles.