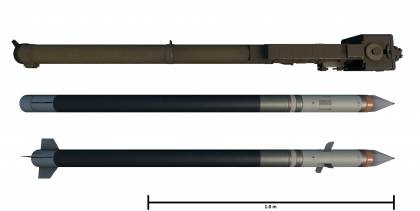 The HN-6 missile (the launch tube, missile with fist stage motor, and deployed missile are shown; scale is approximate)

HN-6 (红缨-6, HongYing, lit. "a red tassel", but the abbreviation HY was already used by PLAN's HY series ASM) is a MANPADS made by CNPMIEC and was exported under the name FN-6 to many countries.

HN-6 has a major difference that differentiates the missile from others - the pointy conical shroud that serves as the cooler for the seeker.

The missile comes with 0.77 kg TNT equivalent, it causes shrapnel and explosive damage to aircraft.

The Mistral SATCP and Type 91 MANPADS are two other land-based, vehicle-launched missiles. Performance-wise, HN-6 is very similar to Type 91 in many aspects and it shines over the explosive mass and acceleration. While Mistral shines over HN-6 in basically all aspects - on the other hand, HN-6 is also the only land-based and vehicle-launched MANPADS that doesn't come with proximity fuse so it might not be enough to deal with fast-moving and careful jets.

HN-6, being a MANPADS, doesn't have the locking range of ADATS and 9M311 found on the infamous Tunguska (at most 7 km on rear-aspect); and it might fall short on some aspects to its counterparts in terms of speed. Still, it gives players a chance to shoot down helicopters or sometimes careless fixed-wing aircraft. Stay hidden and wait for the chance to fire, to get the best result out of it, players will have to wait until the target has entered the 4.5 km all-aspect locking range and fire the missile, if a fixed-wing aircraft is the enemy instead, check its speed before consider firing one - HN-6 really struggles in hitting anything that is supersonic.

Earlier in the 1970s, the Viet Cong provided some complete Soviet Strela-2M MANPADS to Mainland China, asking them to manufacture supplements to this exact type of MANPADS - HN-5 (红缨-5), but due to newer countermeasures from USAF already proving effective against Strela-2M and its Chinese reverse-engineered copy, as well as the worsening Sino-Vietnam relationship, HN-5 wasn't effective enough until Chinese got their hands on some Igla-1 missiles from the Angolan Civil War and made HN-5B from that in the 1980s; which became the starting point of Chinese domestic MANPADS.

After around 20 years, in the mid-2000s, a new type of MANPADS was developed and put into service albeit the exact year and the development history were still unclear. The new HN-6 (红缨-6, exported as 飞弩 [lit. flying crossbow] FN-6), first revealed at the 60th Anniversary of PRC Establishment parade as the suspended missile on PGZ04A, was first shown in combat in Free Syria Army's (FSA) video in February 2013, where a soldier from FSA used one at the city of Deir ez-Zor; and later that month, it has its very first recorded kill on a Syrian Army Mi-8 at the outskirt of Aleppo; during that year, it has recorded 2 helicopter kills and even a MiG-21MF kill on August; as well as ISIL in 2014, where they had 2 recorded kills on Iraqi helicopters. Making FN-6 a "star" among the exported Chinese weapons.