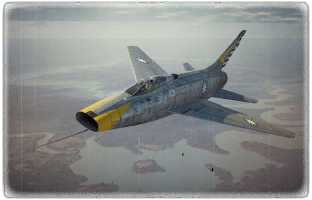 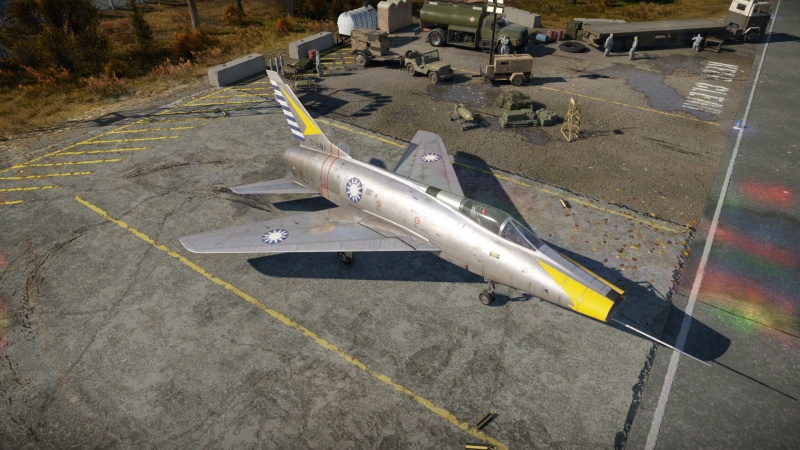 The first supersonic jet available in the ROCAF fighter line of the China tree, the F-100A is an early variant of the famous "Super Sabre", though in Taiwanese service it received a number of upgrades to bring it up to par with later models. Compared to the fighter-bomber F-100D, it has a smaller wing with a straight trailing edge, fewer hardpoints, and no flaps. It also has an early J57P7 engine that produces less thrust than the D model's J57P21. The speed and acceleration remain comparable since the F-100A weighs less.

The F-100A's handling generally feels lighter than the F-100D and it enjoys a better roll rate, though the lack of flaps impacts low speed manoeuvrability. The weapons selection is inferior: while it can still carry goodies like the AGM-12B Bullpup and the AIM-9B Sidewinder, its bomb selection is far more limited and it lacks access to unguided rockets and the more advanced AIM-9E Sidewinder. Still, it has a very solid gun armament of four M39A1 20 mm cannons. With careful speed management, the F-100A can swoop in and swiftly take down its enemies.

As mentioned earlier, the F-100A handles like a lighter version of the F-100D. The acceleration is decent for an early supersonic jet but falls behind some contemporary 9.7 jets such as the J-6A and Q-5A, not to mention the J-7II (9.3 in RB). The top speed is about the same as the Q-5 early and lower than the F-100D. Turning performance is generally similar or improved compared to the F-100D. It can pull harder, which is helpful for snapshots, but there is also a risk of snapping the wings off in hard turns at high speed. The roll rate is improved. Controls stiffen at supersonic speeds. The low speed handling is poor and there are no flaps to help out. Turning energy retention is quite good at high subsonic speeds and not great elsewhere.

The M39A1 cannons are one of the F-100A's main selling points. They are revolver cannons with a rapid rate of fire, high muzzle velocity, and good stopping power. The four of them together provide a burst mass that approaches the M61 Vulcan without any spool-up delay and the ammo supply of 200 rounds per gun is quite generous.

The Ground Targets belt is a good all-round choice. Its AP-I rounds deal heavy kinetic damage with a high fire chance and the sheer volume of bullets will make short work of air targets. Thinly armoured ground targets such as light tanks and SPAAs are also easy prey. Other belts are still good options against air targets for those desiring HE rounds and explosive damage.

The F-100A's only air-to-air ordnance is the humble AIM-9B Sidewinder missile. It has poor tracking and manoeuvrability, so an attentive opponent can dodge them with a single well-timed turn. Still, they are helpful on occasion and give the F-100A more flexibility. Up to 4 can be carried, which is a capacity advantage over the J-6A and J-7II.

The F-100A does not have many options for ground attack, which reflects its status as a dedicated fighter model retrofitted with new ordnance as opposed to the F-100D, which was designed from the outset to lug around literal tons of bombs and rockets. The two hardpoints can carry two bombs or two AGM-12B air-to-ground missiles. In the bomb department, neither the 750 lb nor 1000 lb bombs are adequate for serious base-bombing in Air RB, but the latter can do some decent work against ground vehicles. The Bullpups are keyboard-guided MCLOS missiles that are a common sight on US jet aircraft. They take some practice to use, but once mastered they allow the F-100A to engage enemy tanks and ground vehicles from several kilometers away for precise and safe kills. Many of the later ROCAF aircraft such as the F-104G also feature Bullpups, so the F-100A offers a good platform to get familiar with them.

The F-100A is an early supersonic jet. Its speed, acceleration, and high speed handling are not the greatest for its battle rating, where it often faces much more advanced aircraft, but it does have lethal weapons and enough good qualities to get by. It is important to know the strengths and weaknesses of its opponents.

The general playstyle for the Super Sabres is to build up speed and try to maintain it, because once it is gone, the poor low-speed handling becomes a major issue and the subpar acceleration makes it hard to recover quickly. At the start of the match, it is generally a good idea to fly to the side and avoid entering battle directly. This gives the F-100A time to build speed, altitude, and energy without getting surprised by fast or airspawned opponents. Enter combat at high speed and look for vulnerable targets. Enemies that are flying in straight lines can be surprised with an AIM-9B. If they are manoeuvring and/or aware of your position, the guns might work better. The F-100A can turn well enough in the short term to credibly threaten most opponents and the excellent guns will seal the deal if you can outplay them, but remember to manage its speed as the situation requires: fly too quickly and there will be issues with control compression and wing overload, fly too slowly and the F-100A will be in trouble as stated before. Take advantage of the improved roll rate compared to the F-100D in rolling scissors manoeuvres.

Air-to-air missiles are an issue because the F-100A has no countermeasures. Early missiles like the AIM-9B and R-3S are easy to dodge by turning, but doing so will force the F-100A to lose some speed and energy. The F-100A can outrun missiles if they are launched from some distance away, so this is another reason to maintain speed. Perform some light manoeuvres to drain the missile's energy as necessary. Some opponents like the AV-8A and MiG-21 SPS-K have advanced missiles that are difficult to counter, so be extra cautious.

The F-100A is a handy accompaniment to ground lineups as well. It is the first aircraft in the Chinese tech tree with access to air-to-ground missiles and its supersonic speed makes it easier to dodge gunfire and fly to and from the airfield in between sorties. The two Bullpups can destroy enemies from safe distances (2-3 km away) upon a direct hit or near miss. This does require some good eyesight or spotting assistance by friendly light tanks. The missile capacity is low, but the F-100A can stick around for gun runs if there are no SPAAs around or otherwise quickly return to base to restock. Despite not being an attacker aircraft, the F-100A is arguably more practical than the Q-5 early and Q-5A simply because of the utility that the Bullpups offer compared to unguided weapons.

Be on the lookout for SAM vehicles because they may be able to engage the F-100A even from long distances, and the F-100A cannot drop chaff to disrupt radar locks or spoof IR missiles. If you spot a missile launch, perform evasive manoeuvres and try to keep a low profile while the vehicle is still around.