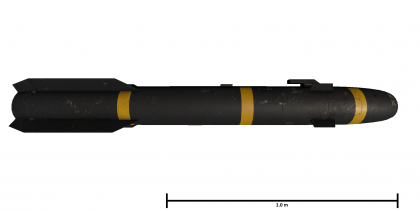 The AGM-114K Hellfire II is an American laser-guided air-to-ground missile. It was introduced in Update 1.97 "Viking Fury".

The AGM-114 Hellfire started testing in 1974, with the A model starting in 1982, B in 1984, and the AGM-114k Hellfire 2 in 1993. The first non-US Hellfire was sold to France in August 2005 to be used on the Euro Tiger ARH and the Tiger HAD in 2012. The AGM-114k hellfire 2 is the US Navy version which is a copy of the AGM-114J with a SAD system added, but was adopted by the USAF as well as the Navy. The improvements of the AGM-114k over the J model, (which was an improvement of the F model) was a lightened construction to increase the range that was lost with the F models improved guidance system's increased weight, as well as the SAD system. 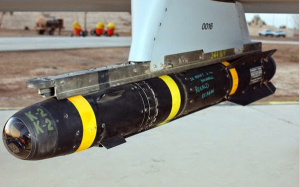 An AGM-114 Hellfire attached onto a Predator drone.