The Phoenix is a missile specialized for long-range engagements and therefore has a very long range. However, it has a slow acceleration and a 16G manoeuvring limit, impeding its manoeuvrability.

The AIM-54 is equipped with a 60 kg TNT warhead, capably of destroying targets with wide proximity fuse.

Compared to the AIM-7E-2 and Skyflash, the Phoenix has a much, much longer range, but the Sparrow retains the manoeuvrability advantage.

When compared to other radar-guided missiles in the game, the Phoenix stands alone as a dedicated long-range weapon, and excels at the job that no other missile can do. While only able to pull 16G, the missile remains a menace for targets even 60 km away from the launching aircraft. 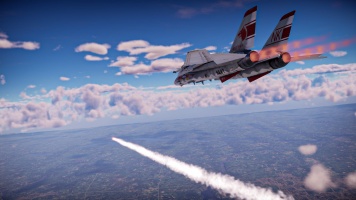 While taking more than 2 of these missiles isn't recommended in regular RB maps, an F-14 pilot can climb to about 5,000 m after take-off and launch at any target it sees, preferably high-altitude targets. Backing up to their team right after. In EC maps, this missile can be launched in groups to different targets at very long ranges by F-14 pilots.

One recommendation when launching a AIM-54A Phoenix is for the carrier aircraft to reach Mach 1 first. Launching at this speed allows the missile to immediately fly at Mach 1 and not have to accelerate as it would be launched from slower speeds. 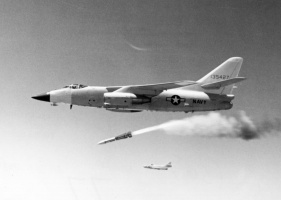 A Douglas A-3A Skywarrior equipped with a AWG-9 radar test-fires a Phoenix missile in 1966.

Development of an American long-range air-to-air missile trace back to 1958, when Hughes was awarded a contract by the United States Air Force for the GAR-9 missile (designated in 1962 as the AIM-47). The GAR-9 which was to have a range of 160 km (100 mi) and a 45 kg (100 lb) warhead. Due to the long distances required, the missile was given an active radar seeker in order to attack their target. The US Navy, seeking a fleet-defense weapon since the late 1950s, took interest in the GAR-9 design as a potential candidate and contracted Hughes in 1962 to develop a new long-range air-to-air missile, designated AAM-N-11, for their fleet interceptor. AAM-N-11 would be later designated in June 1963 as the AIM-54A Phoenix.[1]

Compared to the preceding AIM-47, Hughes' AIM-54 featured an AN/DSQ-26 semi-active radar homing seeker for cruising while receiving updates on the target position. The missile switches over to active radar homing for the terminal attack around 18 km (~11 mi) from the interception point. The AIM-54 featured a Rocketdyne Mk47 or Aerojet Mk60 rocket motor that helped propelled the missile more than Mach 4. The missile maintain the range specification of 160 km and was to be able to attack both aircraft and cruise missiles. The warhead is a 60 kg (132 lb) MK 82 blast-fragmentation warhead that was trigger by a fuse system consisting of radar proximity, IR proximity, and an impact fuse.[2] 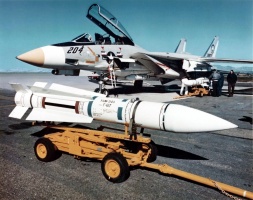 Flight tests of the prototype (XAIM-54A) started in 1965, with the first interception tests taking place on 08 September 1966 at the Navy Pacific Missile Range, fired from a Douglas A-3A Skywarrior.[3] The aircraft platform for the AIM-54 Phoenix was originally the F-111B, an aircraft intended to have commonality with the US Air Force's F-111 Aardvark, but the F-111B was cancelled in 1968. The US Navy set to work building a new fleet-defense fighter to their specifications on 03 February 1969, which produced the F-14A Tomcat. The F-14A can carry six AIM-54 missiles linked with its AN/AWG-9 radar, allowing the aircraft to fire all six AIM-54 missiles simultaneously at separate targets.[1] 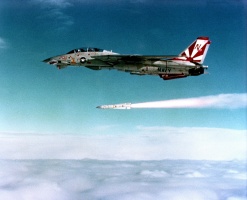 Hughes received a production contract for the AIM-54 missile in December 1970 as more tests with the missiles continue to show its capabilities. During November 1973, the missile passes its technical evaluation and is slated to be ready for deployment with the F-14A. The F-14A's capability with the AIM-54 was shown during an exercise on 21 November 1973, where a F-14A fired six AIM-54 missiles within 38 seconds towards six different targets up to 50 miles (~80.5 km) away, with four missiles hitting their targets. The missile was officially adopted into the US Navy service the same year and ready to be operationally deployed with the F-14A in November 1974. At the time, the missile costed $477,131 USD, which is roughly $3 million USD in 2022 adjusted for inflation.[3]

Other variants of the AIM-54A developed, primarily for training purposes, were the ATM-54A with an inert warhead for firing exercises, the CATM-54A as a non-launching missile for target acquisition practice, the DATM-54A for ground-handling training, and the AEM-54A that contained telemetry electronics for test and evaluation purposes.[2]

The AIM-54A would continue production until 18 November 1980 with a total of 2,505 units as it was replaced by the improved AIM-54C Phoenix missile.[3]

The AIM-54A Phoenix would never be used in combat in F-14As piloted by American crew. Instead, most of the AIM-54A aerial victories were scored by the nation Iran. 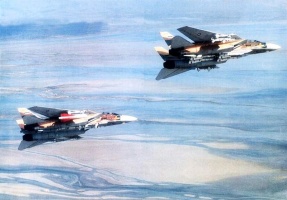 Two Iranian F-14As flying, with the right F-14 holding four AIM-54A in its center pylons and the left F-14 holding one AIM-54A on the left outboard pylon.

The new Islamic Republic of Iran Air Force (IRIAF) would use the procured F-14A and AIM-54A Phoenix missiles in the Iran-Iraq War that launched in 1980. The first air victory credited to the AIM-54A Phoenix occurred on 13 September 1980 when a patrolling Iranian F-14A of 81st Tactical Fighter Squadron (TFS) from Tactical Fighter Base 8 (TFB 8) shot down a MIG-23MS.[5] On 07 January 1981, two Iranian F-14A from TFB 8 spotted four MiG-23BN flying in a tight formation and launched a AIM-54A from a distance of 50 km. The missile detonated on the lead MiG, but the explosion, debris, and tight formation the MiGs were flying in led to two other MiG-23s crashing. This is currently the only known case of a single anti-aircraft missile downing three aircraft.[6]

The IRIAF continued to use the AIM-54A Phoenixes throughout the Iran-Iraq War, even as the stocks of Phoenix missiles began to ran dry due to usage and inability to maintain AIM-54s due to the exigency of war and the lack of spare parts such as thermal batteries. The Iranians received spare parts and service-life extension kits known as Phase 1M54ALE for the AIM-54 Phoenixes as part of the Iran-Contra affair, but the stocks of AIM-54 fell below 50 working missiles by November 1987.[7] By the time a ceasefire is held on 07 July 1988 to begin ending the Iran-Iraq War, the IRIAF was credited with 62 victories with the use of AIM-54 Phoenixes.[8]

With the US retirement of the AIM-54 on 30 September 2004, the IRIAF remains the only user of the AIM-54 Phoenix missiles.[2] In an attempt to supplement their dwindling quantity of AIM-54, Iran developed a domestic production version of the missile, the Fakour-90, which was unveiled in 2013. The Fakour-90 is suspected to be derived from reverse-engineering the US MIM-23 Hawk surface-to-air missile.[9]