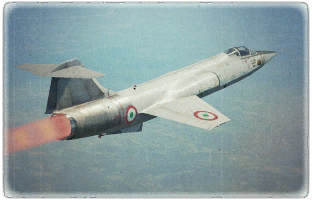 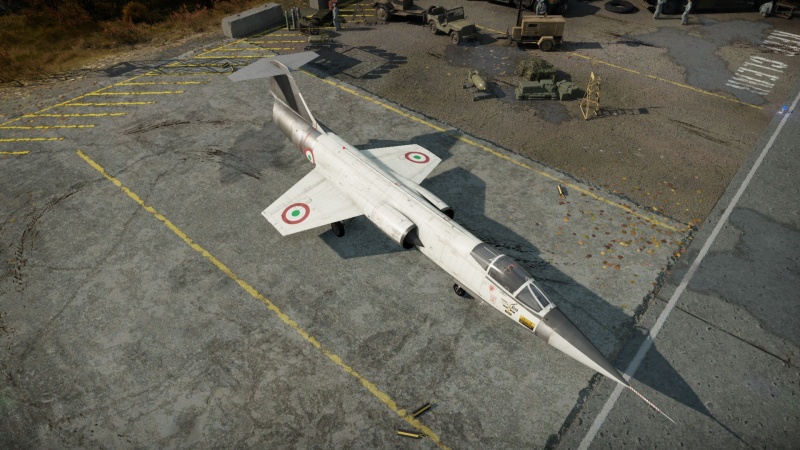 The F-104G has no armour; be it in the form of armour plates or armoured glass. Fuel tanks are self-sealing, which is pretty much a standard feature at this rank. The F-104G also has access to countermeasures as a tier I modification (unlike the Chinese F-104G).

The F-104G (Italy) can be outfitted with the following ordnance presets:

F-104G is a hit-and-run type of airplane, for the simple fact that the wings of this airplane are very small, and this means the aircraft has little manoeuvrability. Its strong point is its engine that makes it very fast and gives it a thrust of 4,530 kgf while with afterburner 6,360 kgf, this makes it capable of regaining speed very quickly after a manoeuvre.

The Italian F-104G, unlike other F-104, carries chaff and flares so players also have the possibility to defend from both IR and Radar missile threats. When using flares, do not continue going straight and instead try to manoeuvre so the missile loses track of the F-104G's engine exhaust and focuses on the flares.

As soon as taking off, players can use two tactics with the F-104G. The first tactic is to go head-on at low altitude against enemy jets. The second tactic is to flank around the map and attack the enemy from behind.

When using the F-104G, remember to stay at lower altitude to avoid enemy anti-aircraft from locking on, then go out and launch the bombs or rockets that was brought into the battle against the enemy. After expending all the payload against the enemy, return to the base and come back for another round of attack runs. If bringing anti-air missiles, the F-104G can also loiter and help maintain air superiority by shooting down enemy aircraft that appear.

The story of the Italian F-104G originally began in America. In February of 1954 at the Lockheed facilities in America, the first 2 prototypes of the F-104 would take flight for the first time. America was looking to develop a new aircraft to combat the Soviet's new age of supersonic jet fighters. The aircraft would incorporate the smallest possible airframe with the most technologically advanced turbojet at the time, to create the base of what would become the F-104. Although the program would have some minor setbacks, such as the intended engine not being available during the beginning, development would continue and would lead to the first variant of the F-104, the F-104A. From the base variant of the F-104 many variants would begin to be developed, such as the F-104C, the F-104S and in this case, the F-104G. 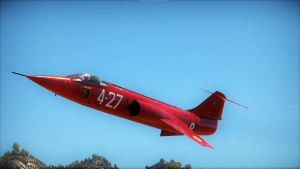 The main differences of the G variant compared to the others would be a reinforced airframe, larger vertical stabilizer, updated turbofans, and improved electronics. Due to these changes, the F-104G would be known as the "definitive" variant of the Starfighter. The G would first take flight on October of 1960, it would initially be built for the German Luftwaffe as at the time they were looking for a fast aircraft which would be able to deliver nuclear payloads, however that didn't stop it from generating enough interest to be exported and licence-produced in many countries, such as in Italy. The aircraft's licensing was handled by multiple manufacturers, notably Messerschmitt-Bölkow-Blohm (MBB), FIAT Aviazione, Fokker, and Sociétés Anonyme Belge de Constructions Aéronautiques (SABCA). 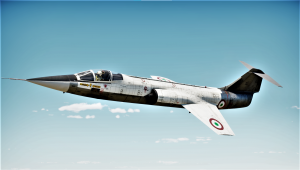 The first aircraft (MM 6501) was delivered to Italy on March 3rd of 1961. It was built by Lockheed, however after being transferred to Italy it was dismantled and used as a model for the construction under license of the 105 units ordered by the Italian Air Force. Aeritalia ended up producing a total of 230 Starfighters in different versions, of which 124 would be made for the Italian Air Force. The F-104G in Italian service was mainly used as an all-weather interceptor armed with AIM-9B Sidewinder infrared guided air-to-air missiles. Other departments instead used the F-104G as a conventional or strike fighter-bomber. The F-104G would eventually be replaced in these roles by the "Tornado IDS", the F-104Gs were concentrated at the 3rd Aerobrigata (later 3rd Stormo) which already used the RF-104G reconnaissance variant. A unit of F/RF-104G of the 3rd Wing took part in the 1991 Gulf War, operating from the Turkish base of Incirlik. Most of the F-104G's would be turned into static displays or kept in museums, for example one resides in Vigna di Valle Airforce museum, this one was the first entirely Italian-built F-104G which first flew on the 5th October of 1962.