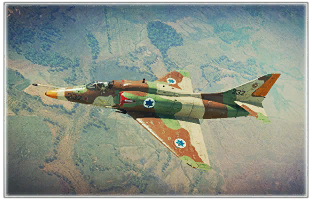 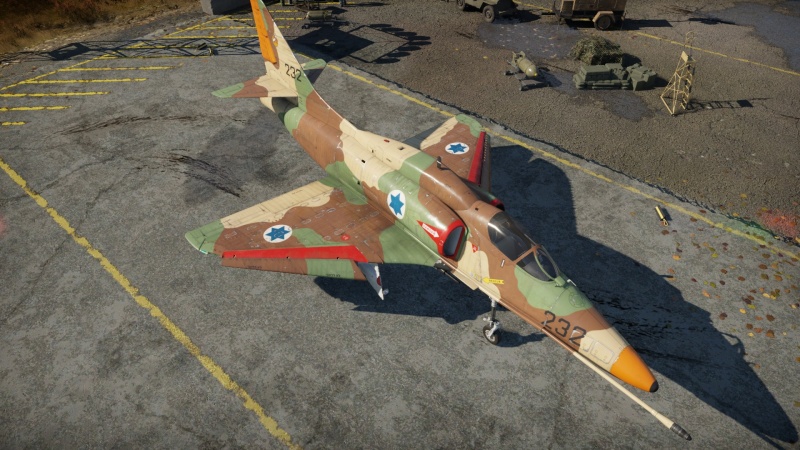 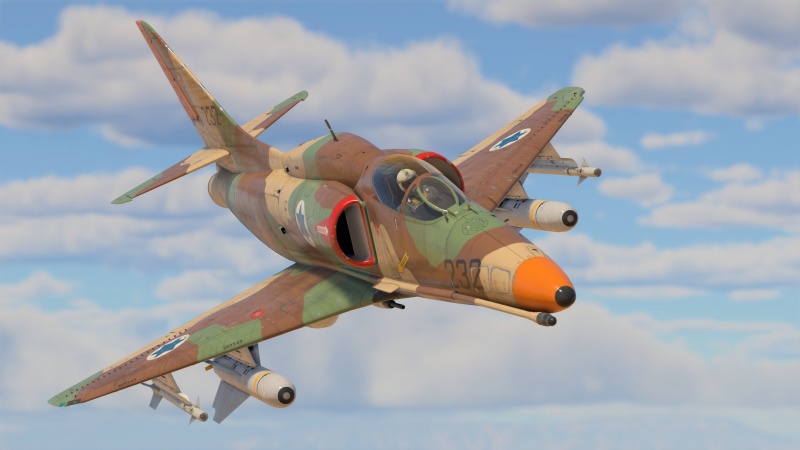 The A-4E Skyhawk is a premium gift rank VI Israeli strike aircraft with a battle rating of 9.0 (AB), 8.7 (RB), and 9.3 (SB). It was introduced as a premium pack in Update "Ground Breaking".

The A-4E has a really decent speed for its BR but loses a great amount of energy at every turn. It accelerates modestly well and is able to reach up to Mach 1.14 in a dive without breaking the wings. Flaps are automatically deployed, so if you set the flaps to landing, it won't deploy them until is safe to do so. This only works if the flaps are not already deployed, if so, it won't retract flaps and you will break them if over speeds of 400+ km/h. The aircraft is capable of maintaining 8 Gs in a turn, but it will overload if a higher turn is made. It is very easy to break the wings pulling hard turns, either negative or positive Gs. With a full load of fuel and a heavy bomb loadout wings become way weaker: any slight turn in negative Gs will overload and break the wings.

The A-4E (Israel) can be outfitted with the following ordnance presets:

Ground attack - With its large payload options and capability, the A-4E is very capable at ground attack or base bombing. The AGM-62A Walleye bombs have a tremendous advantage of stand-off bombing, while you only get roughly 2,000 lbs of explosives in the loadout, dropping from high altitudes (24+ km / 8,000+ ft) at a speed nearing Mach 0.8 can have the AGM-62A with some practice traveling beyond 8 km (5 mi) to a target. The 30 mm DEFA cannons are phenomenal in accuracy, ammo count, and stopping power. However, with the plane being nose heavy, your angle of attack is extremely high at low speeds, which can lead to slam into the ground when trying to strafe ground targets with guns.

Air combat - In a dogfight, the A-4E can hold its own if kept above 800 km/h IAS (500 mph). If you drop below this air speed, your angle of attack increases dramatically since the plane is nose heavy. Combined with the rather weak engine, this creates a situation of high drag low thrust, meaning you will not be able to recover your air speed during the engagement. The A-4E's wings will start to lose lift in a high G pull around 480 km/h IAS (300 mph). Therefore, your best bet is to avoid turnfighting at all costs.

This plane is an attacker and excels at it, with its ordnance. But only in extreme measures could the A-4E be flown as a fighter.

The goal in this plane is to attack ground and keep the 15-minute timer constantly going. You can do this by taking 2 Walleyes with you and destroying 2 tanks or pillboxes. You can also do this by loading 7,000 lbs of bombs and bombing a base, or by strapping on 171 mighty mouse rockets and strafing a ship. All these methods will net the same profit as in SB, more money is earned from passive income than from useful actions.

Israel had been interested in purchasing American combat planes ever since its inception in 1948, but rocky relations with the US resulted in the Americans refusing the vast majority of proposals over several decades. 1965 saw the first approval of a major deal for American combat jets, in which Israel would (initially) receive 48 A-4H Skyhawks. Due to lingering American reluctance to sell high-end military equipment to Israel at the time, the A-4H was actually a stripped-down variant of the A-4F (itself an improvement of the A-4E), removing several key abilities from the aircraft: It had no ability to fire AAMs, had a downgraded bombing sight, and could only carry a limited variety of air-to-ground weaponry.

The Israeli Air Force named the aircraft Ayit (Eagle), and very quickly restored all of its missing functionalities - while also adding several new features that had never been present in any of the American models. It regained the ability to fire AAMs, and was now capable of firing heat-seeking AAMs - previously unavailable to any A-4 model. Israel also installed improved avionics, a French DEFA 30 mm twin autocannon (to replace the American Colt 20 mm), equipment for the launching of precision-guided munitions, and an extended jet pipe that decreased the aircraft's vulnerability to heat-seeking SAMs.

The A-4H Skyhawks quickly replaced the Dassault Mystère to become Israel's primary ground-attack aircraft during the late 1960s. Skyhawks participated heavily in the War of Attrition (1968-1970). One Ayit even managed to shoot down a Syrian MiG-17 using unguided rockets.

The impressive performance of the A-4H eventually led Israel to purchase a large number of them, including several dozen "classic" A-4Es that had previously served in the US Navy. These A-4Es quickly received upgrades to match the A-4Hs in performance. In total, Israel purchased over 250 Skyhawks, becoming the world's leading importer of the aircraft. A-4H Skyhawks continued on to serve in the 1973 Yom Kippur War, the 1982 Lebanon War, and in many later Israeli operations. During the 1970s they were gradually replaced by the F-4 Phantom II and later the F-16. While most of the A-4H Skyhawks were eventually sold to Indonesia, many others remained in service as training aircraft until 2015.