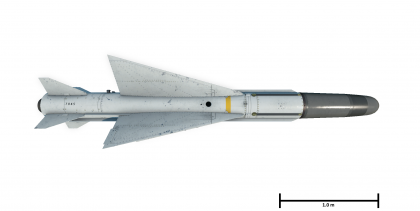 The Matra R530 is a French semi-active radar-homing air-to-air missile, it was introduced in Update "Raining Fire".

The Matra R530 is a BVR, semi-active, radar-guided, heavy missile originating from France. It is the fist iteration of the Matra 530 series of missiles, and is the fist widely used SARH missile used by the French army.

The Matra R530 missile is a heavy anti-air weapon. It is a semi-active, radar-homing missile. The missile can reach the speed of Mach 2.7, and accelerates for a long time before gliding to its target, keeping good manoeuvrability throughout the entire flight.

It is to be noted that the seeking head of the weapon becomes active only after a full second of flight. This first second being entirely used for acceleration, activation of internal components and search of the radar locked target.

The missiles carries a 10 kg warhead, which is more than enough to destroy any target in the fighter/attacker role. The missile's detonation is triggered by a proximity fuse. The missile cannot be fired at a ground target.

The R530 missile can be used both as a front aspect, head-on weapon, and as a pursuit, longer range weapon, the latter characteristic being shared with its IR counterpart, the R530E. It is to be noted that the player has to keep radar lock on the target while the missile is en-route, but does not necessarily has to face the target. It is viable (and preferable) for the launcher aircraft to perform a "notch", which means changing direction after launch, and following a course that still allows the radar to keep lock on the target, while remaining at a safe distance. The Mirage IIIC platform can perform notches at moderate angles, ensuring evasive manoeuvres can be achieved while guiding the weapon.

The missile should be used in a range of about 15km the target is facing the carrier aircraft (making their relative speed about mach 2). The boost time and manoeuvrability of the missile is adequate to secure a kill, though hard evasive manoeuvres will defeat it, but leave the target at lower speed, and open an opportunity to attack with other weapons.

In pursuit, as the missile has a speed of Mach 2.7, and a confortable, but not unlimited range, firing a fleeing target at more than 5 km is to be avoided, because this setup pushes the limits of endurance of the missile, making the hit very unreliable.

Another point to be noted is that with such range, a good firing position will greatly increase the missile hit probability : 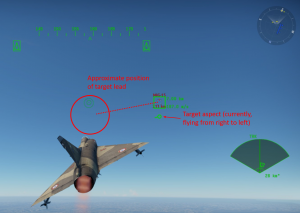 Efficient placement of the carrier aircraft, relative to the target with a R.530 attack

A missile being a target tracking weapon, its guidance is assured by proportional navigation (I.E the missile does not "run after" the target, but estimates the position of the target at the time impact, and directs itself to that position. This method is the most efficient to engage a target). This fact implies that the missile should be fired while taking into account this shift in target position. The adequate firing position is very similar to a gun firing position. Aiming ahead of the target will maximize the missile flight time efficiency. This technique is shown in this picture.

Overall, this missile of average manoeuvrability for the tier is better used on unsuspecting targets at long range, and RWR equipped targets at closer range, to deny the enemy time to plan an evasive manoeuvre.