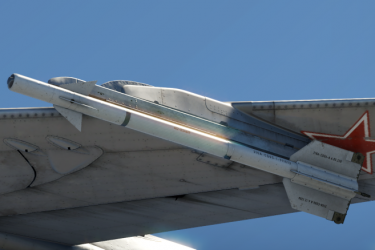 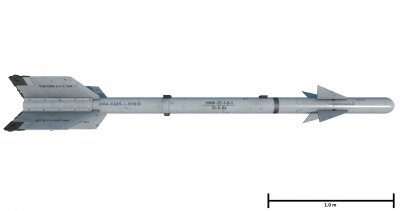 The R-3S missile (scale is approximate)

The R-3S (K13A, AA-2A 'Atoll') is a Soviet infrared homing air-to-air missile, it was introduced in Update 1.85 "Supersonic". It is an improved version of the original R-3 missile, which was itself a reverse-engineered AIM-9B. In-game the R-3S performs similarly to the AIM-9B, but is slightly worse in some respects.

It is one of the first air-to-air missiles in the game, it is therefore really rudimentary in its operation. It can only lock on the target if it is right behind it, it will also not be able to lock if the target is in in front of the sun. Any curve tighter than 9G will be enough for the missile to miss the target: only fire if the target is distracted or running away. The missile's speed is also not very high, limited to only Mach 1.7. This means a limited range at low altitude, but it can be circumvented at high altitudes since the higher the less atmospheric air to cause drag on the missile, translating into a greater range and manoeuvrability.

The origin of the R-3 missile has many stories, but it starts in 1954 with Matus Ruvimovich Bisnovat's OKB-4 (renamed 1967 as GMKB Vympel), which was specialized in the development of air-to-air missiles. Bisnovat's OKB-4 soon received a captured and intact AIM-9B Sidewinder from China.[1] The Chinese reportedly obtained the Sidewinder either as an unexploded missile launched by a Taiwanese F-86,[2] or in a crashed fighter wreckage that carried the missile.[1] Either way, OKB-4 was instructed to reverse-engineer the missile into a working design for Soviet aircraft.

By 1959, OKB-4 has reproduced the missile and tested their design on a Mikoyan SM-9/3T (a variant of the MiG-19S for testing purposes) and the Ye-6T (likewise variant of the MiG-21). The conclusion of the tests allowed OKB-4's missile to move towards production and service as the R-3S (S - sereeynaya (Production)). The missile was also known by the name K-13, or under its NATO designation AA-2 Atoll.[1]

The missile would first arm the MiG-21F-13 , and would go on to arm many other variants of the MiG-21 family and other Soviet fighter aircraft. It would later be improved in the R-3R and R-13M missile.