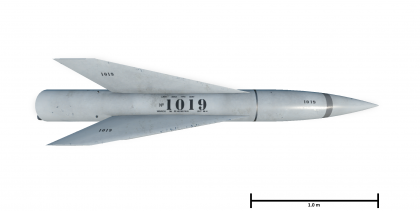 The AA-20 missile (scale is approximate)

The AA-20 Nord is a French command guided air-to-air missile, it was introduced in Update 1.87 "Locked On".

Weighing 134 Kg, the AA-20 Nord air-to-air missile is general a great tool to evict slow moving targets. The AA-20 Nord is manually guided using MCLOS (Manual command to line of sight), at a speed of 563 m/s the missile is easy to keep a visual on as you guide it towards your target. You have to keep in mind that the flare on the missile is not really bright, so firing at peak day time will be hard to do unless you really keep a close eye on it, the flare will vanish from your sight at around from around 4 km distance. This should grant you about 7 to 10 seconds of visual contact as you guide the missile towards your target. The missile has a maximum overload launch of 4G. You can make quick adjustments with its flight path but it will lose speed and the turning will be degraded greatly. The AA-20 Nord has an explosive filler with a TNT equivalent mass of 8 kg. That's enough to take out any target on impact and within a 3 m radius. In addition, any aircraft within about 8 to 13 m range will be severely damaged. You are also able to eliminate soft ground targets with overpressure, such as light anti-air vehicles and open-topped vehicles.

The AA-20 Nord works the same as the Rb05A using MCLOS and exploding near the flying target.

The AA-20 Nord is the AS-20 Nord's air-to-air counterpart, it should not be used as an air-to-ground armament due to its proximity fuse. The best time to use the AA-20 Nord is when the enemy target is unaware that you are near them or they are not paying much attention. It can also be used for head-on engagements, but do be aware that it can be shot out of the sky. This missile has a steep learning curve due to it being controlled by manual inputs, it is best to practice before using it in combat.

The Nord Aviation company started developing this missile in 1953. It was improved upon to make the AA-25 which was a beam-riding air to air missile. Neither the AA-20 or AA-25 saw any combat use, though they were regarded as only a stepping stone to the Matra R530. 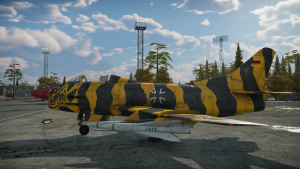