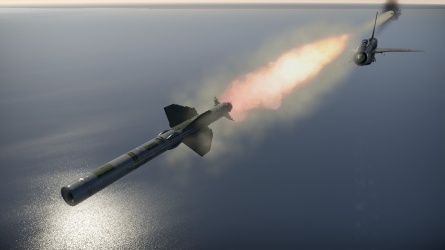 A Red Top fired from a Lightning F.6 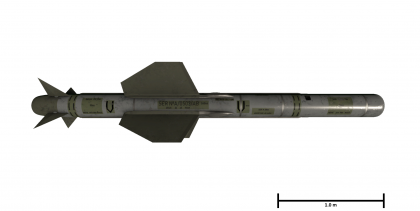 The Red Top is a development of the earlier Firestreak missile. Designed to intercept Soviet bombers it has a very large warhead and was optimised for use a high altitude, however it can still be a very potent weapon in a low altitude dogfight if used correctly. The Red Top has poor range at low altitude, but this can be mitigated by firing the missile from the side of the target.

The Red Top's warhead has a large explosive mass, equivalent to 23.17 kg of TNT. This makes the missile very potent and, coupled with a wide proximity fuse, gives it a formidable blast radius. On account of the large warhead, Red Top detonations tend to be often fatal to aircraft within the blast radius. However there are times (usually when the enemy aircraft is only just within the proximity fuse range and moving away from the missile) where enemy vehicles can survive, albeit usually with (often critical) damage.

The missile most comparable to the Red Top is its direct predecessor, the Firestreak. Both are British missiles were designed to be used in the interception of Soviet bombers, and feature large warheads with reasonable overloads and uncaged seekers which support radar slaving. The Firestreak has better initial acceleration than the Red Top, and possibly better range in some circumstances, however the Red Top has a much better seeker, being able to follow targets better, and perform attacks from the side of targets much better. Compared to most other missiles the Red Top has fairly poor range, particularly when fired from directly behind targets, however this can be compensated for by shooting at targets from the side. The 16 G overload is the same as that of the AIM-9D, and is better than most early missiles, however it is inferior to later missiles such as the AIM-9J, R-60 and Matra R550.

Like most early missiles, Red Top is not highly agile and most aircraft can avoid them by turning sharply. However, this can be mitigated to a degree by firing from the side of the target rather than the rear, when a lock-on can be achieved. To get the most out of the Red Top you should approach perpendicular to the target, once you get a lock you should then make use of the uncaged seeker to lead the missile as much as possible and fire from around 2.5 km. Radar slaving the Red Top can help you get and maintain a lock on the target, as well as displaying useful information (range & closing speed). The exact firing conditions will depend on the situation, but generally if approaching from the side a closing speed of 200 to 300 m/s and a range of 2 to 3 km at the moment of firing will lead to the best results. If you need to attack a target from behind then you should try to get as close as possible with a s higher closing speed as possible, with but not any closer than 1.0 to 1.3 km or so as the missile may not have time to begin guiding; again the best firing range will depend on the exact conditions (speed and altitude etc.). Examples of killing targets from the side with Red Tops can be seen in the videos to the right.

The Red Top is extremely effective against bombers, both due to the huge warhead as well as the ability to be fired from the side and thus keep the fighter out of line of any defensive guns. As the missile seeks infrared radiation (IR), be aware of locking onto other sources of heat which can throw the missile off course such as other teammates, flares and of course, the sun.

Red Top originally started as a relatively simple upgrade to the Firestreak, then still known as "Blue Jay". The proposed Blue Jay Mark IV version added an improved seeker and motor, but was otherwise similar to Firestreak.

When the F.155 interceptor program was started in 1956, the design underwent a much more significant upgrade and was given the new name "Blue Vesta". In order to deal with the higher speeds, and thus temperatures, that would be encountered during extended supersonic flight, the control surfaces were made of steel and modified to a clipped-delta shape to keep the surfaces clear of the shock cones. A new all-aspect seeker was also developed, allowing head-on attacks against Soviet bombers. Considering such interceptions, the Royal Aircraft Establishment (RAE) noted that two aircraft approaching head-on at Mach 2+ would leave only seconds in which the seeker could lock the bomber and be launched, a situation they felt would make the system too difficult to use. Blue Vesta was cancelled in favour of a huge radar-seeking missile, Red Hebe.

When F.155 was cancelled in 1957, the RAF was initially told that the anti-aircraft role would move to the Bristol Bloodhound missile. The RAF managed to convince the Air Ministry that the Tu-22 "Blinder" represented a credible near-term threat that would arrive before Bloodhound. Existing interceptors like the Javelin could not catch the Tu-22 in a tail chase, which is all their Firestreak weapons could manage. This led to the acceptance of the EE Lightning for the interceptor role as an interim system.

Even on the Lightning, the Firestreak would be only marginally effective, requiring careful timing on the part of the fighter to get behind the bomber without running out of fuel during the approach. If faster Mach 2 bombers were introduced, even the Lightning would be largely useless. The argument for a new missile to arm the Lightning won the day, but as it was only needed in the case of a supersonic bomber, the specification was relaxed to use a less-sensitive seeker than Blue Vesta, offering all-aspect performance against a supersonic target, but not a subsonic one. This would allow the Lightning to attack any future bomber by approaching head-on, and existing subsonic models from the tail where it could easily chase them down. The new concept was given the name "Red Top".

By this time the transistor had matured as a militarily useful item, which allowed the seeker electronics to be made much smaller and lighter, and removed the need for in-flight cooling and heating required by Firestreak's valves. This opened up considerable internal room, which was used to greatly increase the size of the motor and warhead, and reposition the proximity fuses for a better view of the target. It also eliminated the need for the complex plumbing and bottles of air and ammonia formerly stored in the Firestreak's mounting pylon.

While best known on the Lightning, the missile also equipped the Sea Vixen; when launched from the subsonic Vixen, the larger motor allowed it to reach much higher speeds than the Firestreak and greatly improved its range and effectiveness. The new seeker also offered much wider engagement angles, up to 30 degrees on either side of the aircraft centreline, allowing it to be fired under a wider variety of approaches. Against its intended target, the Blinder flying at Mach 1.5, it could be used in a head-on approach at up to 22 km range. Against a subsonic target, which required a shot from the rear at up to 90 degrees to the side, it could be fired at around 5 to 7 km.

Red Top entered service in 1964 on both the Sea Vixen and Lightning. There was some discussion of using Red Top on the UK's Phantom fleet as a secondary weapon beside the Sparrow, but it offered little advantage while costing much more, and was ultimately rejected. It was not used on any other platform, although it was considered for interceptor versions of the Harrier and Buccaneer. It armed the Sea Vixen until its retirement in 1972, and the Lightning until its retirement in 1988. On the Lightning, Red Top's larger fins made the aircraft unstable at high speed, and a larger rudder was required on the aircraft. This meant the Firestreak remained in service beside Red Top on earlier aircraft.