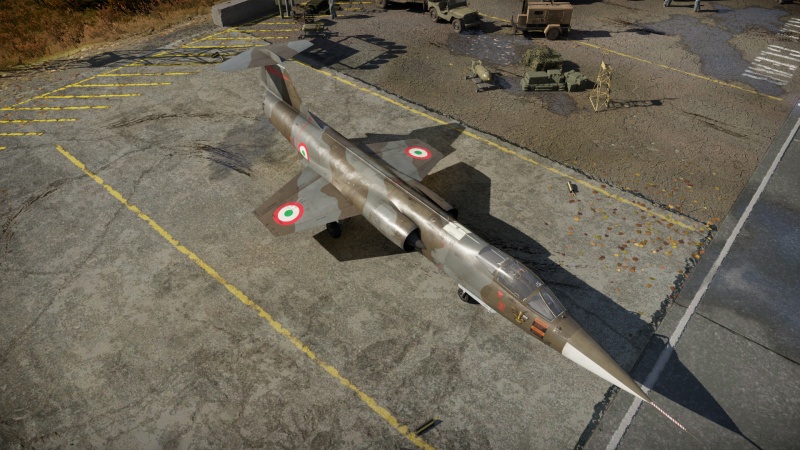 The F-104S is an Italian supersonic interceptor based on the American Lockheed F-104 "Starfighter" series. The external appearance is much the same besides the additional ventral fins, but as the final variant of the Starfighter family, it boasts the best speed and payload capacity of any F-104. It can be used as a high-speed ground attacker with a sizeable load of assorted bombs and rockets. Alternatively, it can be a deadly interceptor if equipped with air-to-air missiles. Unique among Starfighters is its ability to carry a pair of AIM-7E Sparrow semi-active radar homing missiles, the same variant used by the F-4E Phantom II.

The sleek and missile-like Starfighters are known for having excellent speed, climb rate, and acceleration, and the F-104S is no exception. Its J79-GE-19 engine has the highest thrust of all F-104 variants by a large margin: optimal thrust on afterburner is about 22% greater than the J79-GE-11 used by the F-104G. The F-104S will have few issues with outrunning or outclimbing its opponents. But this performance comes at the cost of very poor manoeuvrability, which has not been improved on this variant. The tiny wings and long body make for awful low-speed handling and there is only so much that the combat flaps can do to improve the turn rate. Avoid turning engagements when at all possible. That said, its handling at supersonic speeds is not so poor. Hard turns tend to bleed speed due to the low aspect ratio of the wings. The roll rate is good overall, which helps in defensive manoeuvres.

The F-104S is not equipped with any armour plating, and is therefore rather vulnerable to enemy fire, especially given the fact that most enemies at this rank sport high-calibre cannons. Taking any critical damage in the F-104S will almost instantly cripple it, to the point where you will have to fly back to base, or be a sitting duck for the enemy team. Taking a critical hit to the fuselage will disable you so badly you won't be able to reach supersonic speeds, which is your greatest advantage. The same goes for taking any sort of wing damage or tail damage: it will instantly result in a huge amount of drag on the airframe, reducing your already poor energy retention in manoeuvres making you an easy target to pick off from afar and in effective gun range. Lastly, the engine is a massive target for guns and missiles alike. Having a slightly orange engine will effectively put you out of the fight. And with the already heavy weight of the F-104S, you require the engine power to stay in the fight.

The most important modules to research are the Flares/Chaff modification, alongside the AIM-9B and AIM-9J air-to-air missiles. The Flight performance modifications also capitalize on this vehicle's speed advantage, while the missiles greatly increase its ability to do damage to the enemy, and along with its countermeasures, it gives you great breathing space against advanced missiles such as R-60s, Matra Magics, and even the occasional, but dangerous PL-5B and AIM-9Ls.

The F-104S can be outfitted with the following ordnance presets:

The M61A1 Vulcan is a powerful gatling cannon that may be a fun surprise to Italian pilots. A quick and accurate burst can send targets into flames and the incredible rate of fire allows for some spray-and-pray, which is especially helpful considering how difficult it can be to get guns on target in this aircraft. But it has several drawbacks: first, the gun needs to spool up momentarily before it will fire, and second, the ammunition supply of 750 rounds will be depleted in no time if fired continuously. The former makes tap firing the gun to conserve ammunition a difficult affair but the latter means that holding down the trigger is not optimal either—certainly an awkward situation! New pilots can be afford to be somewhat more trigger-happy as they get used to the gun.

The F-104S has a very wide range of ordnance. For attacking ground targets, the bombs and rockets should be adequate.The largest individual bomb the F-104S can carry is 2,000 lbs, sufficient for clearing out a capture zone in mixed battles. Two types of rockets are available, 70 mm FFAR Mighty Mouse rockets and 130 mm Zuni rockets. The FFARs have a decent penetration of 290 mm but have small warheads with relatively low post-penetration damage. The Zunis are more potent but only 8 can be carried.

Thanks to the custom loadouts, it is possible to make a extremely diverse ordnance loadouts, and the F-104S is capable of carrying in the range of 3,700 kgs of bombs, rockets and missiles, and even with a ballistic computer assistance for all weapons, but with the cost of getting extremely and dangerously heavy and slow.

In the air-to-air missile department, the F-104S has access to AIM-9B and AIM-9J Sidewinders. The AIM-9B is disappointing at the F-104S's battle rating and is easily dodged or spoofed by a target who spots it coming. The AIM-9J, on the other hand, is one of the best IR missiles in the game, with good flight characteristics and high resistance to flares. They are very hard to dodge when launched correctly, even with efficient use of countermeasures. The F-104S can carry up to 6 of them, a record number of missiles for a Starfighter. The other option is the AIM-7E Sparrow, of which 2 can be carried, but cannot be taken in conjunction with the cannon. It requires a continuous radar lock to guide and will not work well at close distances or when looking towards the ground, but has very good range and can be fired at a target at any aspect.

Unlike the F-104G models available to Germany and China, the F-104S cannot carry guided air-to-ground missiles.

The F-104S does one thing extremely well: speed. This is the vehicle's greatest advantage, and can be used to great effect if the pilot is careful about choosing which engagements to pursue. It is recommended to keep up a high air-speed at all times, which will allow the F-104S to swoop in and out of the combat zone while evading powerful enemy missiles with its countermeasures and using its high speed to outrun enemy air-to-air missiles in certain situations. Countermeasures also help evade missiles if the F-104S find itself at low speed or other unforeseen circumstances where an enemy plane is able to get a jump on the F-104S.

However, the F-104S struggles with manoeuvrability. With such small wings, it simply can't produce the lift necessary to throw itself around the sky, and therefore has a very poor turning circle. This means that any turning engagement is most likely futile, and also re-emphasises the utility of a boom and zoom playstyle.

When used in conjunction with its speed, the available armaments really allow the F-104S to shine. The AIM-9Js, already difficult to dodge with their decent manoeuvrability, become nigh-on impossible to avoid when launched at supersonic speeds, particularly against much slower targets. With 6 of these missiles available, the pilot can be a little less frugal than would be the case with other aircraft. The AIM-7E Sparrows can also be a welcome addition in a high-altitude, long-range, all-aspect engagement, or the extremely accurate and powerful M61A1 Vulcan cannon can be used instead for quick head-ons and to mop any remaining opponents at close-range.

The F-104S is equipped with an NASARR search and tracking radar. The radar is mounted in the nose of the aircraft.

The Lockheed F-104 Starfighter was a supersonic jet fighter known for its distinctive appearance, described as a "missile with a man in it". At the time of its introduction in 1958 with the US Air Force as an interceptor, the F-104 set multiple performance records and was the first production fighter capable of flying at twice the speed of sound. Flaws of the design included engine troubles, limited range, and poor handling characteristics that led to a poor safety record, earning it several morbid nicknames like "Widowmaker". The F-104G variant was modified for multi-role capabilities in line with German requirements and ultimately was adopted by several other NATO countries, including Italy.

The F-104G began to replace the Canadair Sabre in Italian service beginning in 1963-1965. Although the airframes were not very old, the subsonic Sabres were already outdated compared to the new Mach-2 capable supersonic aircraft available to NATO and the Warsaw Pact. The Starfighters also supplanted the similarly outdated F-84 Thunderjet fighter-bomber. As was the case for many foreign designs in Italian service, the F-104Gs were for the most part assembled locally by Fiat. They were configured in interceptor, strike, and reconnaissance variants. Trainer variants were also obtained. The original Lockheed ejection seats were replaced with Martin-Baker seats. In Italian hands, the F-104 earned the nickname of Spillone ("Hairpin"), no doubt due to its pointed, needle-like shape.

Despite its poor accident record, the F-104 proved to be popular with the Italian Air Force. In the mid 1960s, the Italian military began to look for new and more advanced aircraft. Options considered included the American F-4 Phantom II, British English Electric Lighting, and French Mirage III. Lockheed's proposal was an upgraded version of the Starfighter with the company designation of CL-901. This was to feature a new J79-GE-19 engine, slight modifications to the air intakes, improved avionics, extra pylons, and additional ventral fins. The CL-901 was ultimately selected due to its low price and the Italian industry's familiarity with the F-104, and it was produced as the F-104S. The first examples were modified from the F-104G.

Two configurations of the F-104S were produced. The F-104S/CI interceptor version replaced the internal cannon with additional avionics required to support the semi-active radar homing Sparrow missiles while the F-104S/CB fighter-bomber variant retained the gun. The two variants may have had different radars with features suited to their roles, though sources are unclear about this distinction. A total of 246 examples of the F-104S were produced over ten years from 1969-1979. An upgrade program was carried out in the 1980s while the Italian military was working on the Eurofighter Typhoon, resulting in the F-104S-ASA (Amodernamento Sistema Arma; "Weapon Systems Upgrade").

The only combat service seen by the F-104 was in Serbia as part of Operation Allied Force, where they flew combat air patrols. They were finally retired by Italy in 2004, being replaced by the General dynamics F-16 Fighting falcon. This was due to the Eurofighter Typhoon not being fully operational yet. This brought the F-104's career worldwide to an end. The only other user of the F-104S was Turkey, who received 40 aircraft and used them alongside other F-104 models obtained from many countries. Turkey retired all its Starfighters by 1995.

The F-104 was a remarkable plane for its time and offered NATO countries a relatively simple aircraft with spectacular performance. Though Italy adopted the F-104 a few years after the United States and Germany, it used the F-104 for longer than any other country and the domestically produced F-104S was the most advanced variant built. Its service was marred by a frightening accident record, as over a third of all Italian F-104s were lost in crashes. By the time the F-104S was retired, 50 years had passed since the F-104's first flight in 1954.

A large number of F-104S Starfighters have survived today and are on display throughout Italy. A full list of survivors can be found here.