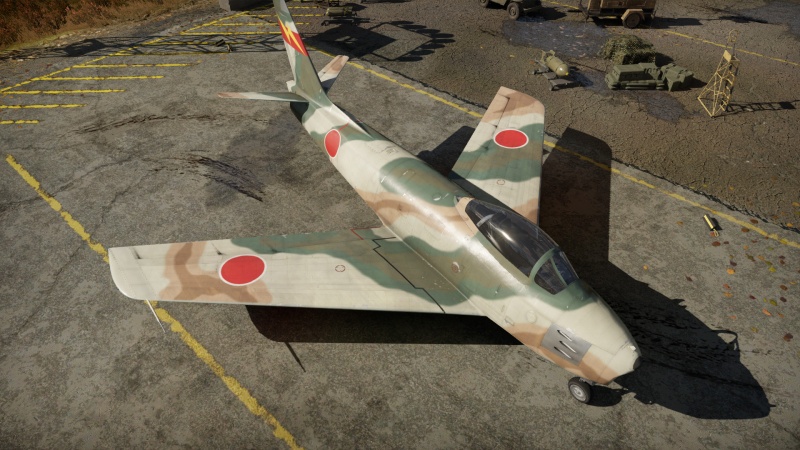 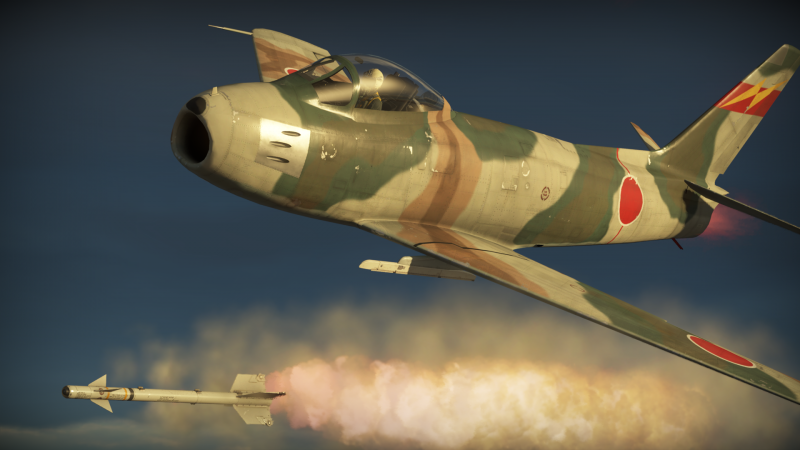 Though not one of the fastest aircraft during this time period, it can be one of the most manoeuvrable when considering throttle control, air-brakes and the wing slats. The manoeuvrability of this aircraft is definitely a plus when flying against other fighters which could be considered more of a manned-missile with lots of speed, but a horrible turning radius. 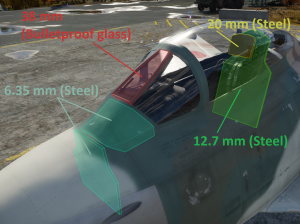 This aircraft is equipped at the front with two steel plates, each of which is 6.35 mm thick. The cockpit has a 38 mm bulletproof windscreen that protects the pilot's torso and head. The backseat incorporates 12.7 mm of steel to protect the pilot's back while the headrest contains a 20 mm steel plate. This protection will help against smaller calibre rounds, however, cannot sustain many direct hits with 20 mm rounds or higher.

The overall survivability of the aircraft is manageable. There are some empty spots on the aircraft that can take a few hits with little damages to modules, namely the wing tips and tail (barring any hits to the aircraft controllability). One common issue for a F-86F-40 pilot is a wing shearing apart due to excess G-force when turning at high speeds. While a wing tip may be lost, the F-86F-40 can still maintain controllability with enough forward speed and use its remaining wing and tail controls to steer itself back to the airfield to land and repair.

The F86F-40 JASDF were U.S. airframes assembled by Mitsubishi in Japan, and they offered the same offensive armament of many of its Sabre brethren, namely the 6 x M3 Browning 12.7 mm/.50 calibre machine guns. These machine guns are similar in performance to their predecessor, the M2 Browning; however, they excelled with a significantly higher rate of fire. The total ammunition count for this aircraft is 1,800 rounds, divided up with 300 rounds per gun. Ammunition belts for this aircraft are conventional 12.7 mm belts found on U.S. aircraft, and typically the tracer belts permit for the quickest correction of aim. Other belts may be utilised as necessary and depending on playstyle such as the Stealth belts; however, these should be used by skilled pilots who already understand the firing aspects of the M3 Brownings and bullet performance. One challenge with the Stealth belts is the lack of tracers, making it much harder to correct aim when solely relying on visual clues.

The unguided rockets out-fitted on this aircraft are the familiar American HVARs, which can be used against slow-moving bombers or ground target vehicles and anti-aircraft guns. Since the HVARs are a fire-and-forget rocket, they work best against either stationary targets or against slow-moving targets which may not be able to avoid inbound rockets. Another option for suspended ordnances includes bombs, namely the 1,000 lbs AN-M65A1 bombs. Two of these bombs is all that this aircraft can safely carry, but these bombs will do considerable damage against ground units, ships and bases. While performing bombing runs, always be on the lookout for enemy fighters attempting to swoop in and eliminate the F-86F-40 which may be flying slower and lower than typical. For air-to-air combat, using the Aim-9B missiles to complement the M3 Browing machine guns makes for a deadly combination. These missiles are best used in close quarters, anywhere from 600 to 800 m which minimizes the opportunity for the enemy pilot to evade or out-fly the missiles. It is quite possible for the enemy to avoid the in-bound missile; however, this provides the attacking aircraft with the opportunity to manoeuvre in and take out the fighter with its machine guns. Hopefully, the enemy fighter has bled any energy advantage it may have had presenting itself as an ideal target for the machine guns.

While the F-86F-40 JASDF▅'s acceleration and top speed are lacking compared to its contemporaries, the F-86F-40 JASDF▅'s slats allow the plane to have an outstanding manoeuvrability. That said, one must beware of their speed as pulling high manoeuvres at high speed can put the plane under great stress, leading to the wings ripping apart. The outstanding manoeuvrability comes at the cost of speed. Pulling hard turns will bleed your air speed. Try to climb up before engaging the enemy to ensure you have enough energy to get out of a sticky situation. Hopefully, there will be a furball underneath you where you would be able to pounce on low-energy fighters with your guns or the AIM-9B. One advantage the F-86F-40 JASDF▅ has over the jets of other nations is the large ammo count of its 6 x .50 cals (1,800) although it would be wise to hit most of your shoots. Try staying above 500 km/h as any slower and you would lose a significant amount of energy in a prolonged turn.

Following the formal founding of the JASDF in 1954, the North American F-86F was selected as the nascent air force's day-fighter jet. Originally, the USAF expected to be able to deliver all of the JASDF's fighters from its stocks of surplus aircraft since the Sabre was slated for replacement by supersonic fighter jets, but with the production of the F-86F-35-NA having been wound down in August of 1954 it was soon realised that existing stocks would be insufficient to cover the orders for the Sabre made by many of the Allied nations. Additionally, negotiations between Japan and the United States resulted in a license agreement being struck which would eventually see Mitsubishi cover the production of the F-86F for the JASDF. However, as production facilities would first have to be set up for this, the first block of F-86Fs would be delivered to the JASDF.

To cover the shortfall of F-86s for export, production of the F-86 was restarted by North American. The new production block, the F-86F-40-NA, differed from the preceding production block in having a new wing. While Blocks 25 to 35 had been equipped with the slatless 6-3 wing, the Block 40 saw the airframe retain the 6-3 proportioned wing, but with an introduction of the slats in order to improve low-speed handling, and the wingtips extended so the overall span was increased from 37.12 to 39.11 ft. This lowered the stall speed of the F-86F-40-NA from 144 to 124 mph and decreased the take-off run by 800 ft. Despite these modifications adding 250 lb to the F-86F-40-NA's weight when compared with the earlier F-86F-35-NA, overall performance remained the same.

The F-86Fs of the JASDF were supplemented by the F-86D Sabre Dog in the night/all-weather interceptor role from 1957 onwards; from 1964 onwards numerous of the F-86F units started converting to the Lockheed/Mitsubishi F-104J Starfighter. Even so, the Japanese F-86F was destined for very long service life, remaining in service as a combat trainer long after they had been replaced in front-line service. The very last JASDF F-86F-40 was withdrawn from active service on March 15th 1982. As the JASDF F-86Fs had been procured under the MDAP program, the aircraft nominally remained USAF property even during their JASDF service; following their retirement many of these aircraft were returned to USAF control and 'returned' to the United States, where most were converted to unmanned QF-86F target drones.