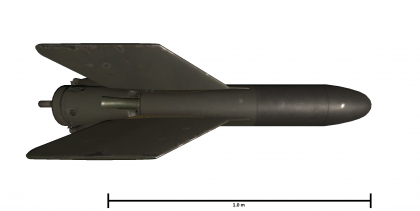 The AGM-22 is a manual command to line of sight (MCLOS) wire-guided anti-tank missile developed by French aviation manufacture Nord Aviation as the SS.11. In the late 1950s, the United States military cancelled its evaluation of the SSM-A-23 Dart anti-tank missile and evaluated the proven SS.11 MCLOS anti-tank missile. Upon accepting the French missile into service, the US military changed the designation from SS.11 to AGM-22 (AGM = Anti-tank Guided Missile). The missiles were immediately outfitted to UH-1B helicopters and crews from special units were trained in anti-tank combat tactics. During the Vietnam Conflict, these units were deployed and saw success against armoured targets with the usage of the AGM-22 missiles.

Being classified as an MCLOS, the AGM-22 is not a fire-and-forget type missile which will home into a target on its own, on the other hand, it requires a missile operator to "fly" the missile to its target. The missile is connected to the firing vehicle throughout its flight by a series of very thin wires. Communications conducted through the wires allowed the missile operator to guide the flying missile to its target allowing some movement around barriers and obstacles if needed. If the target was outside of the range of the total length of wires, the wires would disconnect and the missile would become an unguided rocket until it either hit its target or crashed into another object or ran out of fuel and crashed.

The AGM-22 is fired and guided from a helicopter platform in a SACLOS method, enabling users to simply point the crosshair over the target to guide the AGM-22 into it. If you attack moving targets, watch the missiles flare and keep it aligned with the target. Try to engage the target from the front or from the back to make target tracking a lot easier.

While engaged in the Vietnam Conflict, the U.S. Army in 1966 outfitted their first UH-1B helicopters to carry six of the French-designed SS-11 surface-to-surface missiles mounted on M-22 hardpoints and turned into air-to-ground missiles. The missile was far from a fire-and-forget weapon, due to the fact it required a gunner to track the missile once it was fired all the way to its target. The missile was tracked by a flare lit in the tail of the missile and the gunner would make course adjustments with a joystick to the missile while in flight. The downside to utilising this missile was that it required skilled gunners and a steady platform, difficulties hard to overcome in a battle situation where a hovering helicopter was an easy target. Due to these challenges, the AGM-22 was an unpopular weapon with the helicopter operators and in comparison to the later adopted TOW anti-tank missiles, the -22s were highly inaccurate.[1]