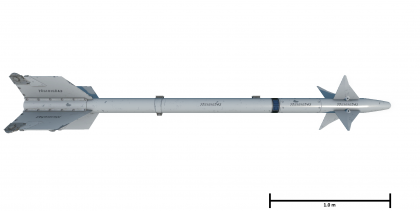 The PL-5B missile (scale is approximate)

The PL-5B is a Chinese infrared homing air-to-air missile, it was introduced in Update "Red Skies".

As a domestic heat-seeker AAM developed by the PRC by Institute 612, Ministry of Aviation Industry (now Luoyang Electro-optics Technology Development Centre), the PL-5 was a vast improvement over the previous model, the PL-2, with a higher tracking rate and overload.

The warhead of PL-5B was filled with 4.76 kg of HBX, equivalent to 7.62 kg of TNT, and comes with a proximity fuse that helps to blast enemy aircraft into pieces.

At the same tier, the AIM-9J and the AIM-9P are very common and the PL-5B in many ways is similar to them in terms of explosive mass and overload, its acceleration speed is a two-bladed sword- on one hand, it caused overshoot due to its immense acceleration to top speed in merely a second; on the other hand, this acceleration also helped to shoot down enemies who had bailed from their manoeuvre, they would have a hard time dodging a missile travelling at Mach 2.2.

PL-5Bs can be used in 3 ways: surprising the enemy, using it as a dogfight missile due to its surprising off-boresight capabilities and long-range snipes. Due to its massive acceleration, the PL-5B can reach a higher top speed than conventional missiles at lower altitudes. For example, whereas an AIM-9P/9J would take 3 to 4 seconds to reach its target from 2 km on the deck at high speeds, the PL-5 covers this same distance in less than 2 seconds. The missile can track targets at around 1.5 km (anywhere closer will drastically decrease the odds to payback on your foe), so surprising enemies who just missed their shots upon you or those who are chasing teammates and didn't pay enough attention to your existence is suggested to maximize PL-5B; alternatively, the immense acceleration and speed also means PL-5B can even surprise targets at even up to 6 km given the missile does constantly tracking on your designated target.

The PL-5B started its development during the 1970s in parallel with its "brother", the PL-5A SARM when Mainland China was in crisis (the Cultural Revolution). While it had already done aerial simulation tests in September of 1972, it came into service in 1986 while the PL-5A had been cancelled 3 years prior due to outdated technology.

After 2 decades of development and the technologies learned from foreign IR AAMs, CATIC introduced the latest export-intended version of this missile- PL-5EII, with a brand new multi-band tracker and ability to lock from front-aspect, enhancing this missile to a new level.