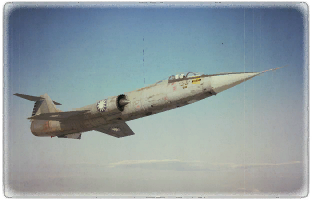 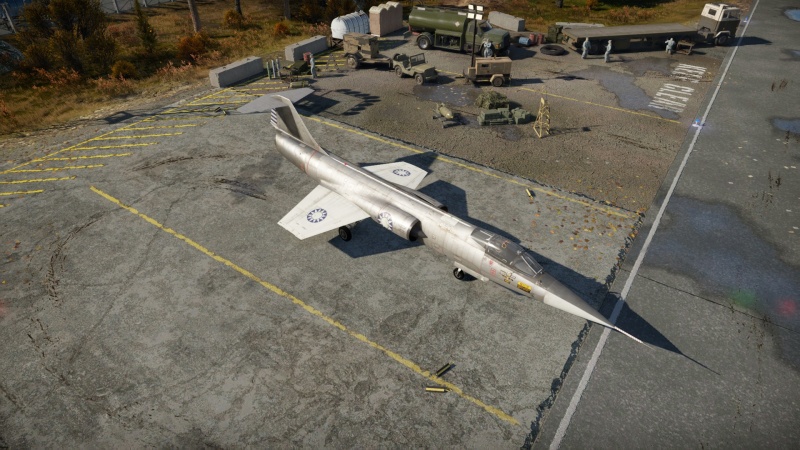 The F-104 Starfighter had a long career with the Republic of China Air Force. The multi-role F-104G model, originally developed for export to Germany, is a major leap compared to the previous ROCAF F-104A and enjoys a more powerful engine and much better suspended ordnance. This Taiwanese example differs from the original F-104G by having access to the AIM-9J Sidewinder air-to-air missile and the AGM-12B Bullpup air-to-ground missile, making it one of the most formidable Starfighters in War Thunder.

The F-104G has about 8% more engine thrust than the F-104A in exchange for slightly increased weight. The general performance has been improved but the characteristics remain similar, so anyone used to flying the F-104A will find the transition easy. As with the other Starfighters, the F-104G has great speed, acceleration, and climb rate due to its streamlined aerodynamics and powerful engine. This is achieved at the cost of low-speed handling and turning capabilities. It only turns acceptably at transonic or supersonic speeds, anything below that being far below average for a jet fighter. The stubby wings with a low aspect ratio also contribute to poor manoeuvring energy retention, so extended turning will bleed energy quickly. The roll rate is good, which helps in defensive manoeuvres.

The F-104G is not equipped with any armour plating, and is therefore rather vulnerable to enemy fire, especially given the fact that most enemies at this rank sport high-calibre cannons. Since the plane's wings are so small, any damage to them at all drastically reduces stability and manoeuvrability, and may result in a crash. All of the vehicle's fuel tanks are centrally located, so fuel fires are unlikely to occur. However, the engine is very large, so it is very likely that it will sustain heavy damage if the vehicle is fired upon.

The F-104G (China) can be outfitted with the following ordnance presets:

As a fighter bomber variant of the F-104, the F-104G has vastly improved ordnance compared to the F-104A's measly pair of AIM-9Bs. For air-to-air combat, the best loadout consists of four AIM-9J Sidewinder missiles. The AIM-9Js have good range, target acquisition, and manoeuvrability. They can be fired from a fairly safe distance and score kills reliably, which is definitely helpful since the F-104G does not fare well in close-quarters dogfights.

For ground attack, the F-104G can carry bombs, rockets, and missiles. The largest bombload consists of three 1000 lb bombs. The only rockets it has access to are Hydra-70s with decent penetration but low explosive mass and ammo count. The real stars of the show for tank busting are the pair of AGM-12B Bullpup air-to-ground missiles. These have a warhead twice as large as the AS-20 Nords carried by the German F-104G and require less precision to score a kill. However they fly significantly slower, which can either be a good or bad quality depending on one's skill with manual guidance. Two AIM-9J Sidewinders can be carried in addition to the Bullups to round out the loadout.

The F-104G does one thing extremely well: speed. This is the vehicle's greatest advantage, and can be used to great effect if the pilot is careful about choosing which engagements to pursue. It is recommended to keep up a high air-speed at all times, which will allow the F-104G to swoop in and out of the combat zone while evading enemies. Stick to boom-and-zoom attacks and avoid charging directly into combat. Keep a safe distance from enemy fighters, as it is easy for enemies to make the F-104G overshoot or otherwise reverse it. If an enemy gets on the F-104G's tail, there is not much one can do besides accelerating away or in emergencies using the roll rate to dodge fire and enter rolling scissors. If a safe distance is maintained, it is even possible to outrun enemy air-to-air missiles.

The F-104G struggles with manoeuvrability. With such small wings, it simply can't produce the lift necessary to throw itself around the sky, and therefore has a very poor turning circle. This means that any turning engagement is most likely futile, and also re-emphasises the utility of a boom and zoom playstyle. Note that the use of flaps can significantly improve turning performance, even at high speeds, but any situation requiring hard turning is in all likelihood unfavourable to the F-104G to begin with.

This vehicle is equipped with AIM-9J air-to-air missiles, which are some of the best in the game. With the ability to mount four of them, this vehicle has the potential to do great damage to enemy targets. The F-104G can also equip a wide variety of bombs and rockets, which allows it to fulfill a ground-attack role. It is inferior to the F-104S in total bombload and rocket selection and is still oriented towards air superiority overall. In combined battles, the Bullpup AGMs are effective for destroying tanks. But a few factors dampen the F-104G's utility here: its poor handling and high speed give only a small window of time to manually guide the Bullpups, it does not perform well in hectic low-altitude dogfights. It can be used in a lineup with the ZTZ99-II and ZTZ99-III MBTs. Tankers who wish to bring in Bullpups for close air support when playing with the ZTZ96A will be better served by the F-100A.

The F-104G is equipped with a PS-03 search and tracking radar. The radar is mounted in the nose of the aircraft.

The Republic of China Air Force received its first Starfighters starting in 1960, the first batch of F-104A/Bs being from ex-USAF stock. Over the decades, subsequent batches were obtained from a wide variety of countries. The F-104G was obtained from the United States in 1964-69, from Germany in 1983, and from Denmark in 1987, totalling 99 single seaters. More than half of the total Starfighter inventory of the ROCAF consisted of the F-104G, making it the most numerically important model and also the most advanced, along with the F-104Js they had received from Japan.

In operational service, the Starfighters were used to patrol the Straits and was the ROCAF's most capable interceptor for much of the Cold War era. ROCAF F-104Gs engaged PLAAF J-6s in the airspace of Kinmen in January 1967 and reportedly scored two kills, though one F-104 did not return to base and may have been lost. Their service was otherwise uneventful. The early Starfighter models were retired from combat roles in the 1980s and the late models continued to serve up to 1997 with upgrades to their weaponry.

A large number of Starfighters are preserved and on display in Taiwan today. Single-seat F-104Gs can be found at Ching Chuang Kang Air Base, Kangshan Chinese Air Force Museum, Pingtung Air Base, and other locations. A full list can be found here.