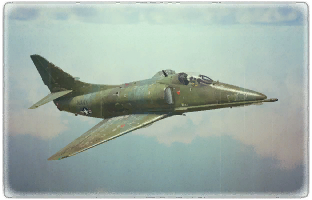 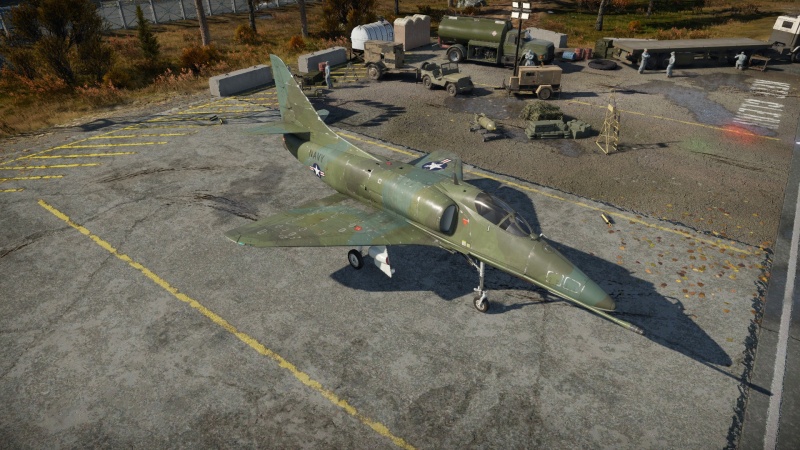 The A-4E behaves like the A-4B, with excellent manoeuvrability at speed, aided by the automatic wing slats. However, the aircraft's poor energy retention during turns is profound, and airspeed will drop down to about 320 km/h (200 mph) after more than a 90 degree turn. Overall, it can turn with G.91s and MiG-15s without issue, however extended dogfights should be avoided. If uptiered, flight performance leaves much to be desired, it can be outmanoeuvred even by the Yak-38 or F-104 in a dogfight.

These wings are well-known to be fragile and to easily snap at relatively normal speeds. To prevent this, always pitch positive relative to the wing. Pitching negative, or yawing too violently, are easy ways to tear one or both of your wingtips. Use the plane's high roll rate to your advantage, and make it a habit to preemptively bank into your turns.

One single well-placed round from an ADEN cannon can completely cripple the plane by taking out the pilot or an engine. It is completely open to attack from the side and front although it can be armed with flares. Overall, survivability is quite poor, and players should minimize their chance of being hit.

The A-4E Early is armed with:

The A-4E Early can be outfitted with the following ordnance presets:

The one role the A-4E can serve is as an air-to-air fighter. The A-4E can equip either the 2 x AIM-9B Sidewinders, the 2 x AIM-9Bs and the 20 mm gunpod, or triple gunpods for this role. The A-4E's standard 20 mm cannons can easily shred any plane in the sky with a handful of well-placed rounds, however it only comes with 200 bullets, so short controlled bursts must be used, and only should be fired sparingly. The missiles can easily supplement the cannon, however these early missiles have a narrow tracking cone, and can easily miss targets that fly erratically, so they too must be used sparingly. If one prefers to be a gun fighter, a single gunpod (or three) can be attached to spray down targets, however they drag down the plane's climb and turn performance (especially the triple gunpods, which eliminate this plane's climbing ability in a fight).

General tactics with the A-4E is to keep altitude until one finds a target to pounce on, preferably fighters trying to climb, low flying aircraft, or distracted aircraft. Always attempt to fight aircraft flying alone; attacking an aircraft within a group is risky, as your low energy retention will make it hard to escape if the attack goes unfavourably. It is also best to turn off if your target starts to evade; If you try to chase, you can quickly bleed energy. However, when uptiered, especially versus planes like the British Harrier GR.1, fighting offensively may not work at all, as these planes can easily outclimb and outrun you, and they will bounce you. In cases like these, it is best to stay back and play as a supporting fighter to your team, or simply switch to ground attack roles.

Your best defense is to not engage in fights where you are clearly outnumbered. However, if you are chased, there are little options for evasive manoeuvring. The plane's high roll rate will make it incredibly easy to dodge bullets, and the flares will help the plane dodge missiles. However, the low energy retention will make it extremely hard to escape the fight altogether, especially if perused by multiple aircraft. In such situations, your best bet is to have a friendly plane to pounce the chasing enemy fighters, which can give you a window to escape or fight back.

If using this place as a ground attacker, equip either FFAR or Zuni rocket pods or AGM-12 Bullpups, and attack ground targets. Another option is to use the wide array of bombs, preferably the 14 x 500 lb loadout, and destroy enemy bases (typically you can only destroy one, sometimes two) with them. Then, when you return to base, you could rearm with bombs, or rearm with AIM-9's and fly as a late-game fighter to finish off remaining players.

In Ground RB, the preferable secondary armaments are the FFAR or Zuni rocket pods, or the 5 x AGM-12B missiles. These missiles, with enough practice, function like a precision 250 lb bomb that is guided to the target, most of the time destroying it. The 2 x AGM-62A Walleye bombs can also be used very effectively with practice, however with only two bombs, it is better to use the five AGM-12B missiles instead. The A-4E can be well paired with the XM-803, MBT-70, or the XM-1 to form a good lineup.

The A4D-5 Skyhawk was an improved model of the A4D-2N (designated A-4C in 1962). The main improvement came in the form of the more powerful Pratt & Whitney J52-P-6A engine, producing 8,400 pounds of thrust. In addition to the new powerplant, the A4D-5 also received two more wing-mounted stores pylons, for a total of five. The avionics were also improved, including a new TACAN system and a toss-bombing computer. Later in their service life, many A-4E Skyhawks were upgraded with the fuselage avionics pod J52-P-8 engine (with 9,300 pounds of thrust) from the A-4F.

The A4D-5 first flew in July 1961, and was renamed to A-4E in 1962 after the Tri-Service Aircraft Designation System came into effect. The A-4E entered production in December of 1962; a total of 499 A-4E Skyhawks would be delivered to the US Navy and Marine Corps starting in January 1963.

The A-4E began to see combat in Vietnam after arriving in early 1965, but it did not fully replace the earlier Skyhawks such as the A-4C. After opening in June 1965, the Chu Lai Short Airfield for Tactical Support (SATS) housed Marine A-4E Skyhawks. The Skyhawks landed using arrestor wires and took off by rocket-assisted takeoff (RATO). Throughout the Vietnam War, A-4 Skyhawks were used to provide close air support (CAS) for Marine Corps ground forces, primarily using bombs and rockets. A total of 362 A-4s of all types were lost during the Vietnam War, including non combat losses. 271 were from the US Navy, and 91 were from the Marine Corps.

During the war, many A-4Es and A-4Fs were used in the United States for training purposes. They had their armament - including external stores - removed and their slats fixed, and were used as aggressors (where they would act as enemy aircraft for training). In the aggressor role, an A-4 was called 'Mongoose'.

It was December 5, 1965. This was the time of the Cold War and Vietnam War. Sailing 70 miles from the nearest island, 200 miles from Okinawa, was the USS Ticonderoga, carrying Attack Squadron 56 (VA-56) consisting of A-4E attack jets that were carrying nuclear bombs. Lieutenant (Junior Grade) Douglas M. Webster, pilot of Douglas A-4E BuNo 151022 was performing a training exercise in his jet, rolling from hangar 2 to elevator 2. The jet was carrying a one megaton B43 thermonuclear bomb. An unspecified accident occurred, and the jet rolled off the deck. After a search, neither the pilot, the jet, nor the bomb was ever found, they likely sank the 16,000 ft (4,900 m) to the ocean floor. This was just one of the many "broken arrow" incidents during the Cold War.

The incident was acknowledged in 1981, but was misleading and it was fully revealed in 1989 due to a diplomatic inquiry by Japan. Lt. Cmdr. James Culda said on May 8, 1989 that "the environmental impact is expected to be nil", as the bomb was not armed and poses no threat at 4,900 m under the sea.

The beginning of the jet era and the escalation of the Cold War forced the US naval aviation command to look for a replacement for the very successful carrier-based piston-engine AD Skyraider, with the possibility of delivering a tactical nuclear weapon in the area of operation of an aircraft carrier group. With the beginning of the military campaign in Korea, the Douglas Aircraft Company began developing a carrier-based attack aircraft with an unconventional approach - instead of pursuing engine power, usually bringing weight and large size to the aircraft, Ed Heinemann's team concentrated on finding ways to lighten the construction, keeping it under 12,000 lbs.

The projected aircraft was a fairly compact, lightweight jet fighter-attacker with a delta-shaped wing and a competently lightweight design. This is how the A-4A "Skyhawk" was born, one of the first jet-based carrier-based aircraft capable of carrying a nuclear bomb. The aircraft was distinguished by its simplicity of design, practical controls with excellent flight characteristics for its time. Soon, in 1956, the A-4B version appeared, capable of carrying a huge variety of mounted weapons on three suspension points, including guided missiles.

Thus, the Skyhawk had become a truly universal carrier-based aircraft, capable of solving the entire spectrum of tasks for US Naval Aviation. A rather noticeable drawback of the attack aircraft was still the limited range of action, also army types always wanted to increase the weapon load. In 1961, Douglas presented an improved version of the aircraft with five pylons for armament and a new engine, which compensated for a heavier combat load, and also increased the range of the attack aircraft. It was the A-4E that became one of the most massive Skyhawk modifications and formed the image of a modern carrier-based attack aircraft. The "E" version was actively involved in the Vietnam War, and later, up till the end of the 80's, was used to simulate enemy aircraft in training dogfights.