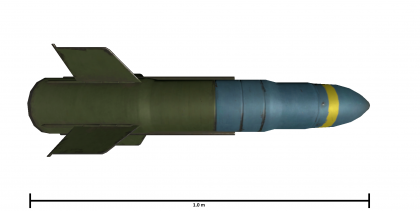 The Swingfire missile (scale is approximate)

The BAe Swingfire is a British SACLOS anti-tank guided missile. It was introduced in Update 1.63 "Desert Hunters".

The Swingfire was the British Army's primary heavy anti-tank missile during the Cold War period. It was designed to allow the launcher vehicle to remain completely under cover while the gunner took a portable sighting system forward to a hidden location to guide the missiles. The missile used thrust vectoring with enough control to make a 90 degree turn immediately after firing, allowing the launcher to be positioned down a side street or behind buildings. A second sight was mounted on a periscope arrangement on the vehicle as well, allowing quick reaction shots from behind berms and hills.

The original versions of the 1970s offered 500 mm of penetration and used a manual guidance system, but the fleet was updated with semi-automatic guidance and then a new 800 mm warhead. This meant it could penetrate any tank from the 1960s through the 1980s, until the widespread introduction of composite and reactive armours. It is relatively slow, which allows the enemy to sometimes escape attack, but it remains highly manoeuvrable throughout its flight and can use this to attack targets behind cover.