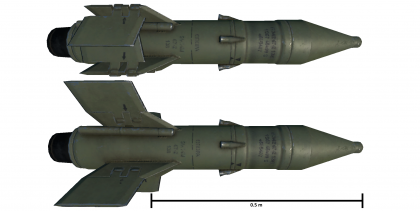 The 9M14 missile with fins folded and deployed (scale is approximate)

The 9M14 is a Soviet manually-guided anti-tank guided missile. It was introduced in Update 1.71 "New E.R.A.".

The 9M14 is slower and has less explosive mass compared to its US counterpart, the MGM-51B. However, this doesn't take away from its ability to take out tanks reliably on its own. The main drawback from using this missile is that it can be intercepted by machine guns easier and that the BMP that it was fired from cannot react to incoming fire while the missile is in flight. The player must keep this in mind when facing tanks as the speed of an AP, APDS, or HEAT round, and even other ATGMs will reach you before your missile reaches them.

The 9M14 "Malyutka" is the first anti-tank guided missile Soviet tankers will use as they climb the ranks of the Soviet tech tree. As such it will take some time to get used to the missiles quirks. The main thing to keep in mind at this battle rating is situational awareness. Having situational awareness is key while trying to utilize the 9M14 for maximum effectiveness. The optimum range you will want to engage players is between 800 and 1,500 meters. This provides the player with a good view of the enemy tank, allowing for a good flight path for the missile while keeping any potential enemies from seeing the plume of smoke that is emitted from the BMP-1 when the missile is fired. Remember; the two key things to have in mind is to spot the enemy first, and fire from the optimal range. The 9M14, as an early Cold War ATGM, is quite adept at taking out almost any vehicle at its battle rating. While the MCLOS guidance system has its quirks; in the right hands it is unstoppable. The main advantage over SACLOS missiles is that one could easily guide the missile over the crest of a hill and destroy enemies who otherwise might go unharmed. The main disadvantage is that you must both guide the missile using the default [Alt + WASD] keys while using the mouse to move the gunsight to follow moving targets.