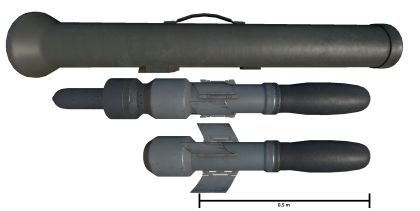 The MILAN missile (the launch tube, missile with fist stage motor, and deployed missile are shown; scale is approximate)

The MILAN is a Franco-German SACLOS anti-tank guided missile. It was introduced in Update 1.81 "The Valkyries".

The MILAN is an anti-tank guided missile developed jointly by France and Germany, with a single shaped-charge warhead. MILAN means "Missile d'Infanterie Léger ANtichar" (light anti-tank infantry missile). It is also the name for a family of a bird of prey (Kites) in French.

The MILAN ATGM was created as a result of the "Euromissile" Franco-West German joint missile development program in the 1960s. The missile system quickly became the standard anti-tank weapon of many NATO forces, and found widespread use in most of the armies of the Alliance.

The MILAN system, which consists of two main components, the launcher and the missile, employs a semi-automatic command to line of sight (SACLOS) command guidance system, which keeps the missile in the center of the operators crosshairs, by using GPS technology and, depending on the model, the missile is tracked using either a tail-mounted infrared lamp or an electronic-flash lamp. The missile is not affected by radio jamming or flares because it is wire-guided. However, drawbacks include short range, issues with overland powerlines, and a vulnerability to infrared jammers, which can prevent the missile's IR tail light from being tracked correctly.

Later on, more advanced versions of this missile system were developed. Variants include:

The later variants of the MILAN system make use of tandem-charge HEAT warheads in order to keep up with developments in Soviet armor systems (ERA), which proved very effective against single shaped-charge warhead ATGMs. 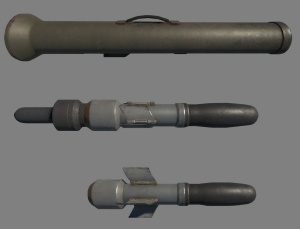