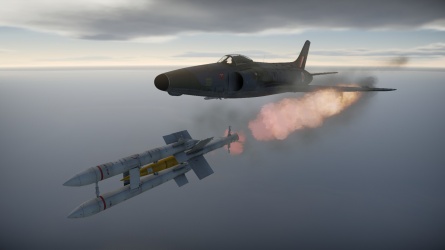 The Fireflash fired by a Swift F.7. 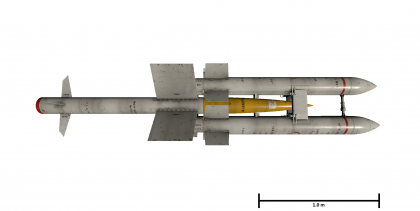 The Fireflash missile (scale is approximate)

The Fireflash is a British SACLOS-guided air-to-air missile. It was introduced in Update 1.93 "Shark Attack".

The main part of the missile considered the "dart" is a missile body with controllable fins, beam tracking sensors and a warhead. This portion of the missile does not have any propellant nor a motor. To produce thrust for the dart, it relies on two boosters which after firing, burn for approximately 1.5 seconds to a speed of about Mach 2, where then the boosters separate and the dart continues to be guided by the aircraft's radar beam to the target making minor adjustments as needed.

Fireflash traces its history to the immediate post-war era when the Royal Air Force began development of an air-to-air missile primarily for anti-bomber use. The initial concept, "Red Hawk", called for an all-aspect missile using beam-riding guidance, similar to a number of short-range experimental systems developed during the war. As the speeds of aircraft began to increase dramatically with the introduction of jet power, the Royal Aircraft Establishment (RAE) concluded that the limited range of the radar systems meant the pilot would only have seconds to aim and fire before their aircraft was passing the target.

Realizing that Red Hawk was beyond the state of the art, a "watered down" concept was introduced and given the name "Pink Hawk" by its designers. Instead of an all-aspect weapon, Pink Hawk would be designed for tail-chase shots against propeller-powered bombers like the Tu-4. This would give the pilot much more time to lock their radar and fire, while still giving them enough stand-off range to remain well out of the bomber's defensive fire. Additionally, as the missile would be approaching from a very limited set of angles, the radar system was greatly simplified. The proposal was accepted in 1951 and given the official name "Blue Sky".

By this time, the RAE had come across German wartime documentation that suggested the ionized trail left by rocket motors would block radar signals. This led to the concept of using fall-away rocket motors that gave the design its unique layout. Initially the design used four cordite-powered rocket motors from the wartime RP-3, but these were later replaced by two larger custom motors known as Stork. When the Storks burned out they were ejected with an explosive bolt system, leaving the central "dart" to continue on, unpowered but free of the rocket exhaust. Given the expected low accuracy of the beam-riding guidance, a relatively large 20 kg warhead was carried. The result was a long and heavy weapon, about twice the weight of the Sidewinder.

By the time Blue Sky began testing in 1953, advances in the new art of infrared guidance had led to reconsideration of the original Red Hawk all-aspect concept. Once again the technology was not up to the task, and another watered down concept emerged, Blue Jay. This appeared to be far more powerful than Blue Sky; it could be launched from any aircraft, even ones without a radar system, with the added benefit of allowing the launching fighter to turn away from the target once fired. Interest in Blue Sky dwindled, but development continued as a stop-gap weapon while Blue Jay was in development.

Testing completed in 1955 and acceptance trials began. This revealed that the missile would oscillate wildly after the rockets were ejected, and further changes had to be made. By this point development of Blue Jay was only 18 months behind Blue Sky and the Ministry of Supply (MOS) began to have serious misgivings about purchasing the system in large numbers. A production arrangement was finally agreed on and the missile became Fireflash. The first Fireflash squadron was activated on 15 August 1957.

As expected, Blue Jay closely followed Fireflash. Given the name Firestreak, it entered service the next year and Fireflash was removed from service as quickly as they could be replaced.