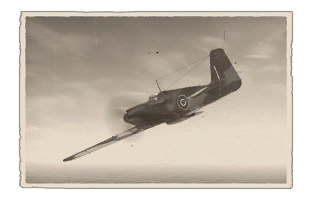 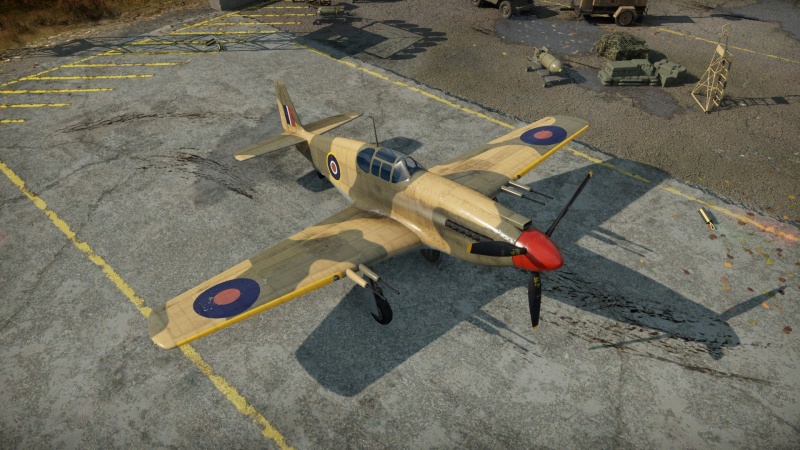 The ▄Mustang Mk IA is a premium rank III British fighter with a battle rating of 4.0 (AB/SB) and 3.3 (RB). It has been in the game since the start of the Open Beta Test prior to Update 1.27.

The Mustang Mk IA is equipped in the same manner as the American original P-51 with four 20 mm cannons in the wing and Allison engine. The Mustang Mk IA takes on a two-tone desert camouflage as default with a light blue underbelly, making it quite distinguishable in the airspace. Distinguishable identifications towards the Royal Air Force are seen with roundels on the wings and rear fuselage, with a red, white, blue fin flash.

The Mustang Mk IA (Great Britain) is armed with:

The Mustang Mk-1A is similar to its bigger brother (or in some ways smaller) in the fact that it carries many good and bad traits. Interestingly, it inherits much of the advantages of the P-51D while adding some of its own good characteristics. High altitude performance is miserable, but it won't get there any time soon with the sluggish climb rate. Top speed is very good, yet achieving it can take some time due to the slow acceleration. Low-altitude manoeuvrability is decent.

The Mk-1A is equipped with four Hispano 20 mm cannons, making it a formidable firing platform. However, these cannon will run out of ammo, due to the sparse 125 rpg. They will jam quickly too. Take advantage of the cannon though, because when compared to other nation's counterparts the MK-1A can make rapid kills of any plane. Air targets belts are recommended for experienced players; they possess the most HE shells out of any belt, but lack tracers. Unlike in the Typhoon series, the guns on the Mustang are mounted in close proximity, dealing a deadly double punch when hitting. Very similar to the Spitfire Mk.Vc which has 5 rounds per gun less than the Mustang.

Unfortunately, the Mustang Mk-1A is not a great Boom & Zoom fighter nor a great turn-fighter; it is a trade-off between the great high-altitude performance of the P-51D and its own average all-altitude performance. The top speed is only middling, although top speed and dive-speed are excellent. Climb rate is relatively poor, at only 13 m/s. To top that off, it has an average turn-rate as well. Thus, the Mk-1A is a great plane for head-ons, tail-end combat, and in very few cases, turn fighting. At low altitudes, turning is very snappy provided you have the speed. The engine is prone to overheating relatively (and annoyingly) quickly in realistic and simulator battles. Additionally, a small amount of damage taken by the engine can result in its destruction, which is problematic while attacking bombers. Additionally, the cockpit is a great downfall, as it provides poor visibility.

A Mustang with altitude is a dangerous Mustang. Try to take out a Mustang, you must do what you can to rob it of its altitude advantage by either climbing above it or bringing it down to the Earth. The latter can be easily done if the Mustang pilot is aggressive and will eagerly tail an enticing target in a dive down to low altitude. In this case, one can rely on bleeding the Mustang of its speed as it pursues its target or when it returns to a climb and use this opportunity to pounce the Mustang.