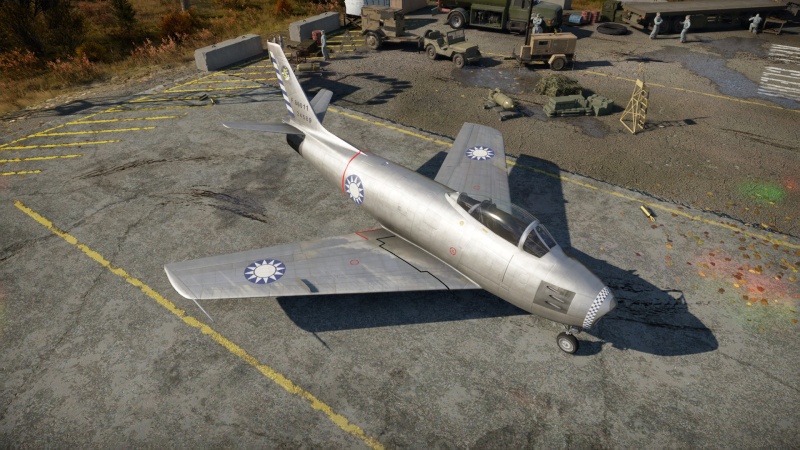 Six 12.7 mm M3 Browning machine guns make up the F-86F-30's firepower by the sheer rate of fire rather than the damage potential of a single projectile. The six machine guns altogether can make even a half-second hit on an enemy plane crippling for the enemy's modules.

The 12.7 mm machine gun can also be quite versatile in Air RB, as the M3 Browning has enough penetration power with Default and Ground Target belts to destroy light pillboxes.

The F-86F-30 can carry a small assortment of payloads. Though not inconsequentially small, the payloads do impact the F-86F-30's flight characteristics enough that it is not suggested to use them in a fighter role at all if equipped with ordnance.

Use rockets on battlefields with many lightly-armoured vehicles, while bombs against hard points like a well dug-in tank.

While the F-86F-30's acceleration and top speed are lacking compared to its contemporaries, the F-86F-30's slats allow the plane to have an outstanding manoeuvrability. That said, one must beware of their speed as pulling high manoeuvres at high and max speed can put the plane under great stress which leads to the wings falling apart. The outstanding manoeuvrability comes at the cost of speed. Pulling hard turns will bleed your airspeed. Try to climb up before engaging the enemy to ensure you have enough energy to get out of a sticky situation. Hopefully, there will be a furball underneath you where you would be able to pounce on low-energy fighters with your guns. One advantage the F-86 has over the jets of other nations is the large ammo count of its 6 x 50 cals (1,800) although it would be wise to hit most of your shoots. Try staying above 500 km/h as any slower and you would lose a significant amount of energy in a pro-longed turn.

The F-86F-30 is equipped with an AN/APG-30 rangefinding radar, located in the nose of the aircraft. It will automatically detect other planes within the scanning area and display the range to the closest target. It is linked with a gyro gunsight and can help with aiming at close range.

The Republic of China Air Force (ROCAF) was one of the many nations to use surplus F-86 Sabre jet-fighters. Between December 1954 to June 1961, the ROCAF received 160 surplus American F-86F-1 to F-86F-30 aircraft, and by 1958, the ROCAF possessed 320 such aircraft. The aircraft would engage in air combat with Chinese MiGs over the Taiwan Strait during the Taiwan Strait crisis of 1958. Additionally, ROCAF Sabres were among the first aircraft to be equipped with AIM-9 Sidewinder missiles, which were used with devastating effectiveness against Chinese MiGs during the Taiwan Strait Crisis.

Following the end of the Chinese Civil War, the ROCAF received the F-86F series jet fighter from the United States, being surplus USAF airframes. The ROCAF received 160 airframes between December of 1954 to June of 1956, with further aircraft delivered afterwards contributing to a total of 320 F-86F aircraft. These aircraft were mostly upgraded to F-86F-40 standards. ROCAF F-86Fs engaged Communist MiG-15s and MiG-17s during the 1958 Taiwan Strait Crisis. During the crisis, Communist MiGs shot down or damaged 42 ROCAF aircraft but lost 15 of their own.

However, the Taiwanese F-86F introduced a new weapon to the realm of aerial warfare - air-to-air missiles. In 1958, under Operation Black Magic, the United States equipped Taiwanese F-86Fs with the newly-developed AIM-9 Sidewinder. Each aircraft was fitted with two Sidewinders on underwing launch racks, which were used with considerable success against Chinese MiGs over the Taiwan Strait. ROCAF F-86Fs were the first aircraft to fire the missile in combat and achieved the first air-to-air missile kills on September 24th 1958, when multiple MiG-17s were shot down using the new weapon.

The AIM-9 Sidewinder severely undermined the air superiority of the Chinese MiG-17s, which had better thrust-to-weight ratio, vertical performance and climb rate than the ROCAF F-86s. The AIM-9 changed this, as Sabre pilots could engage with Chinese MiGs without needing to reach a similar altitude. However, while the AIM-9's deployment was a considerable setback for the PLAAF, the situation changed when a Chinese MiG-17 returned to base with an unexploded AIM-9B lodged in its airframe. The missile was given to Soviet technicians, and subsequently reverse-engineered into the R-3 series of missiles.

It's questionable if ROCAF received stock F-86F-40 or actually F-86F-30 with F-40 modification kits. The service history and combat history, including tales of firing Infrared guided air-to-air missiles would be covered in the page of ROCAF F-86F-40: