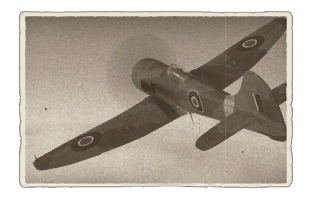 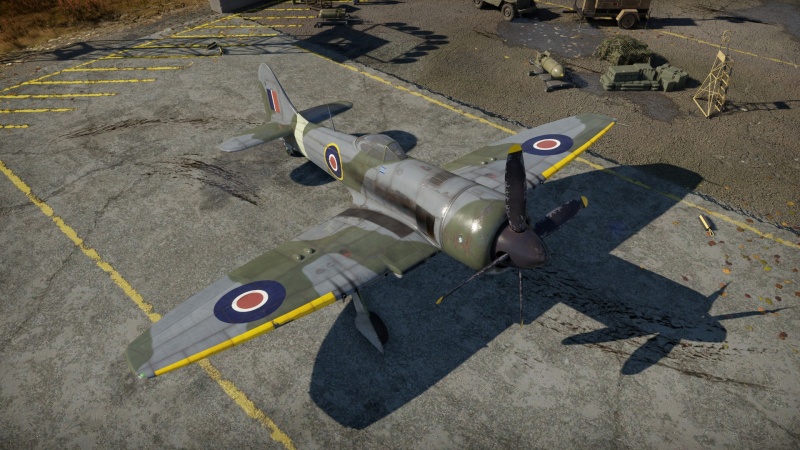 The Tempest Mk II is a rank IV British fighter with a battle rating of 6.3 (AB/SB) and 6.0 (RB). It has been in the game since the start of the Open Beta Test prior to Update 1.27.

The Tempest Mk II is the last propeller-driven aircraft in the Hawker line and is a fitting send-off. With its sleek airframe, extremely powerful Centaurus engine and heavy weight, it holds one of the highest top speeds of any traditional prop aircraft in the game and acceleration to match. However, it only keeps these advantages below 3,000 meters, as above that the engine will asphyxiate and you will notice a drastic decrease in performance.

Boom & Zoom is this aircraft's forté, and is the main way you should fly it. It can easily abuse its brutal speed and acceleration combined with the amazing dive speed and powerful weaponry to blitz any aircraft that it sets its sights on. On the flip side, the heavy weight means it fares very poorly in manoeuvre fights as most propeller aircraft (and some jet-powered ones) will easily turn circles around it.

The Tempest Mk II is armed with:

The Tempest Mk II can be outfitted with the following ordnance:

The main tactic for the Tempest II is high-speed combat. With a weight of over 5,000 kg, and a peak WEP power of 2,500 hp it can accelerate very fast in a dive. This means that less altitude is traded for the same gain in speed compared to other props.

The second main benefit from the extra weight is that the plane can hold the speed gained from a dive for a long time. Additionally, the plane has a very sleek airframe, which means that its top speed is one of the highest of any prop in the game. Considering this data, the plane should be flown in high-speed shallow manoeuvres.

Against jets, the tactics are reversed. Jets are faster and heavier, thus shallow angles should be avoided. Steep angle energy fighting and turn fighting should be applied. Few exceptions against jets should be made. The Ho 229 will out turn the Tempest II, but upwards spirals at high speed are an effective way to burn away the 229's energy and they are easily trapped.

The second exception is the Meteor F Mk.3. This plane outperforms or is on par in every aspect except for, hilariously enough, top speed on the deck.

The third and last are the Yak-15/17. They turn better, but their diving speed is a lot lower than the Tempest II's.

There's not much one can do while a Tempest II is diving on your aircraft, as it'll blitz you before you know it and will be gone just as fast. Most smart Tempest pilots stay around 2,500-3,500 meters so they can keep their engine performance and have the ability to abuse their dive speed. If you are able to catch a Tempest mid-turn or if it's unaware of your presence, it becomes significantly easier to take down considering most aircraft at the tier can turn circles around it. Try to catch them in a manoeuvre trap and force them to bleed their speed for an easy kill.

The creation of this plane also came with an older counterpart, the Tempest Mk V. The Mk II has a different engine than the Mk V which is why they seem different. The Mk II's were used later in the war than the Mk V's.

The Shooting Range #23 - Pages of History section at 05:58 discusses the Tempest and its engine.