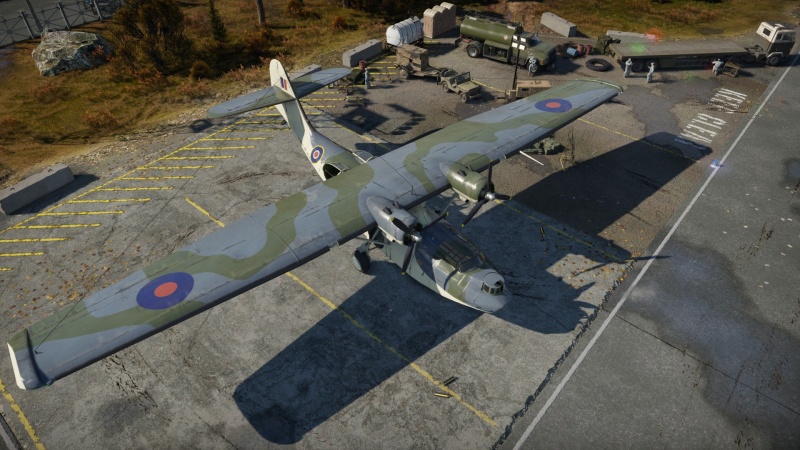 The ▄Catalina Mk IIIa is a premium rank I British bomber with a battle rating of 1.7 (AB/RB) and 2.0 (SB). It was initially introduced in Update 1.43 as the Catalina Mk IVa, however, it was changed to its current version in Update 1.57 "Battle March".

The Catalina Mk IIIa is a slow, heavy aircraft with a fantastic bomb load for its BR. Its dual 12.7 mm machine guns on either side of the rear fuselage can tear apart early fighters which it will predominantly face. Though it does have a dead zone directly behind the tail, this can be fixed by applying gentle rudder movement from side to side so one of your 12.7 mm machine guns can open up. The single 7.62 mm Browning defending below the rear of the aircraft can inflict some damage if equipped with AP belts, but try to get the 12.7 mm on target as soon as possible. The four 1,000 lb bomb load is excellent at its BR, being able to destroy large targets such as destroyers, heavy tanks and bases. Torpedoes can also be equipped, but the Catalina is a big, slow target for a ships AA guns so it's preferable to drop bombs on them from above at a higher altitude. Wings can also be ripped off very easily above 315 km/h if sharp movements are made.

The gunners have fairly good protection with armour plating around their positions, and the Catalina can take an enormous amount of punishment - but she can't sustain flight on one engine. This means you should always be wary of engine damage and return to base if one of them is leaking oil or coolant, though thanks to the large wing area the Catalina can glide a surprisingly long way if both engines are knocked out of action. In RB, the Catalina is an easy target for enemy fighters with mouse aim so high altitude bombing is recommend, but in SB the Catalina excels at ground attack and is incredibly hard to take out when crewed by an experienced pilot. Avoid airfields and destroyers at all costs unless at high altitude however, the anti-aircraft can easily hit you with the slow cruising speed of only 250 km/h. Being very heavy, the Catalina can be hard to reduce altitude with without going too fast - so the landing gear can be extended and used as an airbrake! The speed at which it rips off is much higher than the speed that the Catalina can actually go.