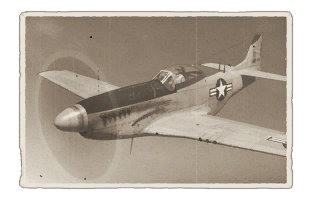 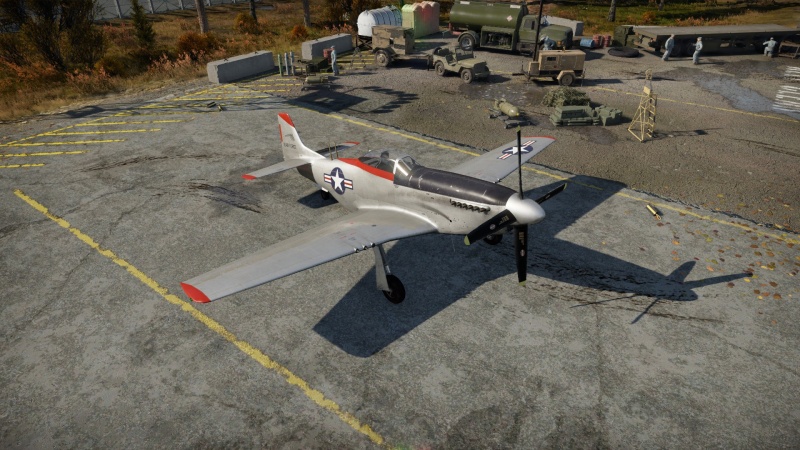 The P-51D was a further development of earlier Allison-engined P51s in that it received the excellent Rolls-Royce Merlin engine which gave it excellent high-altitude performance. This, combined with excellent endurance, made the P51 well-suited for bomber escort duties.

In-game, the P-51D-30 runs a 75" boost that allows it to outspeed nearly every single vehicle at 5.0 BR. It possesses an excellent climb rate and good high-speed handling which makes it extremely well suited for Boom and Zoom. Additionally, bombs and rockets can be carried making the P51 a good ground striker in Ground RB.

It has a very high stall speed. You'd be better off to not stall in this plane. Only do it when necessary and when you know you're safe to do it. The P-51D-30 is not a turn fighter but is definitely manoeuvrable enough to dogfight at high speed. Optimal climb speed is 280 km/h IAS with WEP and should be decreased by 5 km/h every 1,500 m altitude. The flaps are so strong you can deploy them in pretty much any situation in a dogfight. And even at 600+ km/h IAS, it takes a little bit of time for your flaps to break, takeoff flaps can be deployed at up to 440 km/h IAS.

The P-51D-30 can be outfitted with the following ordnance:

Probably the best assets the P-51D has are its speed, weaponry, and energy retention. In game and in real life the P-51D achieves ideal performance above 7 km; however, even at low altitudes, the P-51 is still incredibly fast. If one climbs at the ideal speed of 250 km/h IAS side climbing is not necessary- a high enough altitude will be achieved by the time the first contact is initiated that the P-51D-30 can simply evade incoming fire and speed away, untouchable.

When an enemy is spotted moving away from the P51-D, enter a mild dive and go for a strafing run. After that, it is important to continue heading in the same direction so the speed is maintained. Doing this, even the most agile fighters won't be able to turn quickly enough to fire on you. If you miss on your strafe run or have an enemy behind you, you should get at least 2+km from the enemy and then start to turn towards him, depending on his speed. If your speed is under 500 km/h, a bigger distance should be achieved before attempting a turn. This ensures that your turn will be completed before the enemy gets within 1 km distance before you can line up your shot. Head-ons are actually very effective against fragile/lightly gunned vehicles such as the A6M and Spitfire. The high rate of fire and velocity of the 50 cals make long-range sniping very viable.

When engaging enemy bombers, aim for engines and wings. A good burst will rip off wings with ease and/or start several fires.

Defense Shallow dives and altitude are your friends- at 5.0 there is no vehicle short of an Fw 190 D-13 that can catch a P-51D-30 above 5 km. Furthermore, the P-51D-30 is near untouchable in a dive- careful, however, as planes such as the G.55S can and will catch a P-51 in a steep dive. In such a case, initiate a shallow dive which will make use of your superior energy retention and top speed.

Defensive dives are a strong suit of the P-51D as the flaps and airframe are very durable- spiral dives can easily rip the wings of more fragile Bf 109s and Spitfires.

It is possible in arcade to perform Pugachev's Cobra (due to the agility at high speeds) in some situations but should not be attempted unless you are at high speed and know what you are doing as it does require a large amount of skill to pull off successfully.

Due to the speed of the P-51D you may be able to outrun slower vehicles in a straight line (especially above 5 km) such as the Bf 109, Fw 190, and some heavier fighters and most ground attack aircraft. Coupled with light rolling and WEP you should be able to run from most dogfights.

It's recommended to use Manual Engine Control with the P-51D-30 because of quite fast engine overheating. The D-30 has indefinite WEP and Meredith Effect modeled so radiator drag at high speeds is not an issue, even when fully opened they slow down the plane by up to 5 km/h.

The MEC controls on this plane are incredibly simple. Put out both radiators to 100%, and keep it like that for the whole game, as your engine will never overheat. Due to the position of the radiators, it gives a small amount of jet thrust to counteract the little drag it creates.

The most famous Mustang version was the P-51D with teardrop (or bubble) canopy. The main problem for the pilots of the earlier variants was a huge blind spot at the rear of the aircraft due to the canopy design. An earlier attempt to address the issue was a British-designed Malcolm hood, installed on many P-51Bs. It improved rearward visibility, but the search for a better solution continued. In January 1943, USAAF's Colonel Mark Bradley, while stationed in Britain, was introduced to the then-new "bubble" canopy, designed for use on Spitfires and Typhoons. The canopy had no framework and offered near 360-degree vision. To install the new canopy, the rear fuselage section of the Mustang had to lose some height. However, this change required minimal redesign to the airframe. The inaugural flight of the new P-51D took place at Inglewood, California on 17th November 1943. The P-51D-30 was developed soon before the war ended. It mainly served in the Korean war.