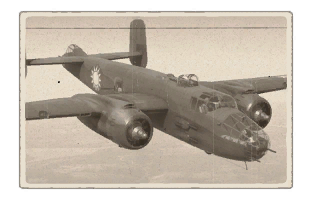 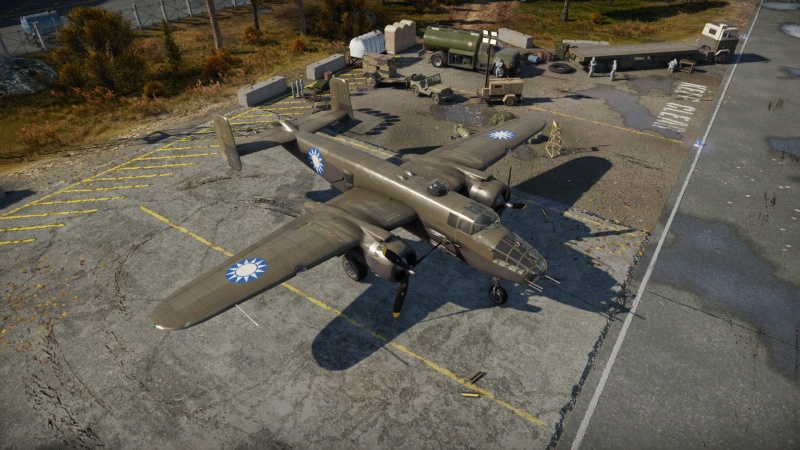 The two Wright R-2600 air-cooled radial engines are themselves hard to destroy and with dropped payload, the B-25J can keep flying on just a single damaged engine, denying under-armed fighters the ability to lethally cripple it. Yet this aircraft does have an Achilles heel, its fuel tanks. While present in all planes, the armour, crew and bomb bay take up all the necessary space within the fuselage, while leaving only space in the wings to house the fuel tanks. A common downfall of this aircraft is the structural failure of the wing spar due to wing fires of the fuel tanks.

Like other members of the B-25 Family the B-25J-30 carries an impressive array of pilot-controlled weaponry. While not as powerful as that found on the PBJ-1H and PBJ-1J, the six 12.7 mm machine guns still provide excellent fire power for strafing ground targets, or even dealing with enemy aircraft (if the situation calls for it). With the guns all located in the nose, convergence is not a major concern, the B-25J-30 also carries a decent ammunition load of 400 rounds per gun.

Unlike the Soviet B-25J-30, which carries its own set of bombs, the Chinese version has retained the same loadouts as the American B-25J-20. Like all B-25 variants this gives it a wide selection of ordnance, making it a versatile aircraft.

Like other B-25 variants the B-25J-30 has a respectable defensive armament consisting entirely of 12.7 mm machine guns. The tail and dorsal turrets have an overlapping field of fire to the rear, making approach from this angle extremely dangerous for enemy aircraft. Unfortunately there are no turrets on the underside of the B-25, making it vulnerable to attack from below.

One of the most efficient yet dangerous way of earning RP with the B-25 is to first dive-bomb a base at low altitude, then strafe soft ground targets or fend off incoming fighters.

S/N 44-86692 introduced the addition of mounting glide bombs suspended beneath the aircraft's fuselage, as well as providing a special cockpit sight and release controls for the aforementioned glide bombs. The Norden M9B bomb sight was added beginning with S/N 44-86792 and, with a later S/N 44-86799 the rudder controls were rerouted with added armour protections to the Emergency Equipment location. The aircraft type, throughout its upgrade history, was also used by USSR and China as a part of the Lend-Lease program, and were used on various fronts during their services.

During World War II, Nationalist China received over 100 B-25C and B-25D Mitchell medium-bombers, with a further 131 B-25Js arriving via the Lend-Lease program. Being applied to 4 newly formed squadrons of the 1st Medium Bomb Group, the 1st, 2nd, 3rd, and 4th Squadrons respectively, they replaced the older Soviet-built Tupolev SB bombers, having gradually been replaced by the newly acquired B-25s.

Under the command of the Chinese-American Composite Wing (CACW), the B-25s were sent to fight spreading Communist forces within China, fighting alongside British-built de Havilland Mosquito fighter-bombers. Four squadrons were created at this time to fight them, and in 1948 they were forced back to the Island of Taiwan, bringing along their Mitchells. Unfortunately, some were left behind and were impressed into the People's Republic of China (PRC) Air Force. It is unknown, though, if they were in their forces long enough to fight in the initial stages of the Korean War.