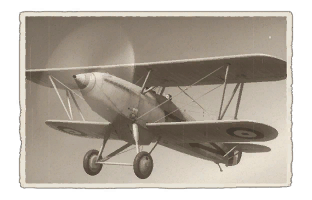 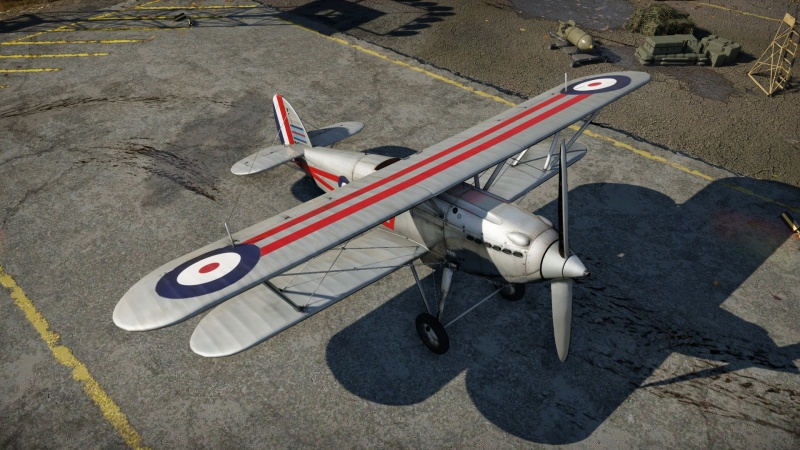 The Fury Mk I is a reserve rank I British fighter with a battle rating of 1.0 (AB/RB/SB). It has been in the game since the start of the Open Beta Test prior to Update 1.27.

The Fury Mk I is one of the three reserve fighters in the British tree - the other two being the Nimrod Mk I, as well as the Fury Mk II. 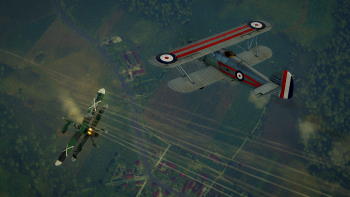 The first Fury Mk I prototype was presented in 1927, with the first flight of a production model in March 1931 and entered service with the RAF in May of the same year, together with the Nimrod Mk I (a naval version of the Fury). The Fury Mk I was in service with Yugoslavia, Iran, South Africa, as well as participated in the Spanish Civil War and World War II.

In the game, the Fury Mk I is a slow fighter with insufficient weapons and not the best rate of climb, but with quite great maneuverability. The turning speed is better than most other biplanes, which gives it an advantage, but during active maneuvers, the speed is used up very quickly. Thus, after one full circle, it is impossible to stay at the same height, it is necessary to descend to maintain controllability of the aircraft.

A total of 117 Fury Mk I fighters were produced. In 1937 the Fury Mk II was introduced with a more powerful engine. It replaced the Fury Mk I in production and on airfields.

As a reserve plane, the Fury isn't a fast plane. It can't climb nor accelerate very well, but all the Fury variants can turn decently, though they tend to bleed energy easily. The modelled fixed pitch prop will mean not much power is around for climbing at the start of the match - a problem also currently shared with the later Gladiators.

The Fury Mk I was an aircraft that was stripped of all which was unnecessary to enable it to be the lightest and fastest possible. Like many biplanes just before the start of World War II, the only protection afforded the pilot was the wood and canvas around him and the engine at the front of the aircraft. The best course of protection for this aircraft is to gain the element of surprise as it will not take much to damage critical components or knock out the pilot. All critical modules are concentrated in the forward fuselage area so attacks from the front or the side tend to do the most damage quickly.

The Fury Mk I's armament, two 7.7 mm Vickers K machine guns, are suitable but inferior compared to other reserve fighters due to their small caliber and relatively slow muzzle velocity. This means the Fury can take a while (and a bit of ammo) to destroy targets it will face at its rank such as Bf 109 B-1s, CR.42s, I-15s and even lightly armoured Ki-27s and A5Ms. Keep in mind that unlike the current modelled Brownings as used on Gladiators, these 7.7 mm guns won't do much damage unless you aim for the most vulnerable parts of your opponent's aircraft.

Use Universal or Stealth rounds with the Vickers K machine guns, but keep in mind that these 7.7 mm guns won't do much damage unless you aim for the most vulnerable parts of opposing aircraft. 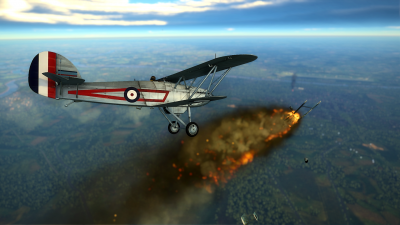 If you want to use the Fury, the best advice is to side climb a bit at the start of the match so you at least have some energy to work with. Plan manoeuvres ahead and go for easy targets such as inattentive planes and attackers destroying ground vehicles. Most of the problems with the plane are mitigated in Arcade Battles as traits like engine overheating and wing rip-offs are not modelled in that mode.

The Fury Mk I is a typical reserve aircraft in that it is an unremarkable plane. It is neither outstanding in speed, its manoeuvrability or even weapons loadout. Though contemporary aircraft may have a speed advantage, beefier weapons or even more manoeuvrability, the Fury Mk I can still find its place on the battlefield in both in air battles and the ground attack game.

The Fury Mk I has a crazy low stall-speed which allows it to circle anti-aircraft artillery or anti-aircraft vehicles easily. Though the plane's Vickers 7.7 mm machine guns are relatively weak, they can wreak havoc on the ground targets if enough bullets connect with their targets. If there are no enemy aircraft circling above the Mk I, then it can leisurely eliminate the ground targets, even tightly grouped vehicles. Even without access to bombs, the Fury Mk I can be an effective ground attacker. 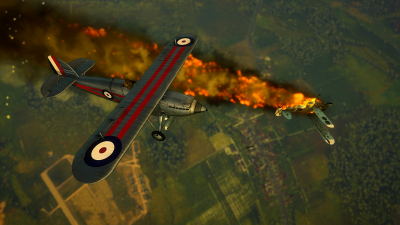 A Fury Mk I moving on to hit next target

With many contemporary aircraft using faster firing machine guns, larger calibre guns or just more of them, it will take a skilful Fury pilot to balance or tip the scales. With 600 rounds of ammunition for each Vickers machine gun, there is a lot to work with; however, it is to the pilot's detriment to spray bullets everywhere. To make the most impact with the 7.7 mm rounds, the best chances to hit the enemy are when while in close. The longer the shot, the more likely bullets will either miss or harmlessly bounce off the target. Attacking close in between 100 and 300 m gives the best chances in critically damaging the enemy. Unless the pilot pulls off a pilot snipe and knocks out the pilot, chances are it may take a couple passes to inflict enough damage to send the target to the ground in flames. Close in attacks may offer the best opportunities to damage the enemy, but it can make for some hectic flying.

The 7.7 mm bullets fired at aircraft fuselage do relatively little damage; therefore, it is crucial to target critical components such as the pilot, engines, oil coolers, and fuel tanks to eliminate the enemy effectively. Aircraft wings can also be susceptible to snapping if enough bullets perforate the skin and structure.

One use for the Fury Mk I is as an early interceptor aircraft against bombers. While Do-17, TBD-1, SB 2M, Ki-21, and F.222.2 bombers have various defensive gunners, they are not impossible to shoot down with the Fury. The pilot does need to watch how they approach the bombers. Typically flying in from the front or the underside of the bombers allows for an unscathed approach. However, if you find that you must approach with a defensive position firing at you, make small adjustments to stay out of the line of fire and wait for the gunner to run out of ammunition before levelling off and taking a shot. Chances are you can knock out the gunner or even work on taking out the engines. A crippled bomber easily allows the more manoeuvrable biplane to make enough passes to finish the job. 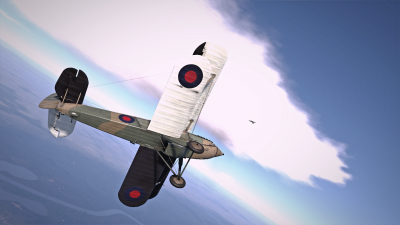 A Fury Mk I turns to engage a He 111 H-3. The Fury Mk I sports the standard RAF bicolor camouflage of the 43rd Squadron, RAF, Great Britain from September 1938 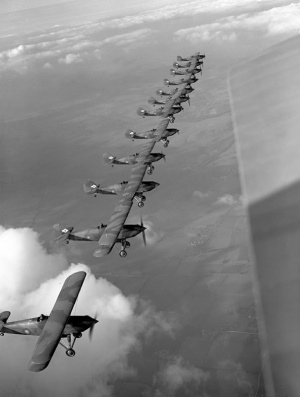 Formation of Fury Mk I

The first prototype of the Fury (initially named the Hawker Hornet) was presented to the UK in 1927. In March 1931, after being renamed into the Hawker Fury, the biplane made its maiden flight and entered service with the RAF in May of the same year. The Fury would serve in not only the Royal Air Force, but also with Yugoslavia, Iran, South Africa, and the Spanish, which they used during the Spanish Civil War. While the Fury Mk I did not become a mainstream RAF fighter, Fury pilots were considered elite due to Fury-equipped squadrons such as No.1 squadron participations in gunnery and aerobatic competitions. A total of 117 Fury Mk I fighters were produced.

In 1937, the Fury Mk II was introduced with a more powerful engine. It replaced the Fury Mk I in production and on airfields.

The Hawker Fury was a single engine, single-seat biplane of composite structure which first entered service in May 1931. The Fury was designed by H.G. Hawker Engineering Co. Ltd (Hawker Aircraft Ltd since 1933) under the direction of Sidney Camm. The Fury prototype made its first flight in March 1931 and after a successful test and evaluation period, entered production for service in Britain's Royal Air Force. However, the Fury was an expensive aircraft and, with Britain being in the grip of a financial depression, initially only enough aircraft were ordered to equip three squadrons; Nos 1, 25 and 43 Squadrons.

An elegant aircraft with streamlined fuselage contours, the Fury Mk.I was the first RAF fighter with a speed exceeding 322 km/h (200 mph).

The armament consisted of two synchronous 0.303 inch Vickers Mk.IV machine guns with 600 rounds per gun, mounted in front of the cockpit. Whilst the Fury was an excellent fighter when it first entered service, it did mark the end of an era as one of the last open cockpit, biplane fighters produced by Britain. Its fixed undercarriage, fabric skin and twin Vickers guns were reminiscent of fighters of the First World War, and when it was replaced in front line service with the RAF in 1939, it truly was a relic of a bygone era.

A total of 117 Fury Mk I fighters were produced, in five series.